As the artist J M W Turner was strolling along the south bank of the River Thames on 16 October 1834 he saw flames erupting from the Houses of Parliament. Out came his sketchbook, and he hastily scribbled the unfolding scene as flames enveloped the building and lit up the night sky. Apparently he even hired a rowing boat in order to get nearer to the action. 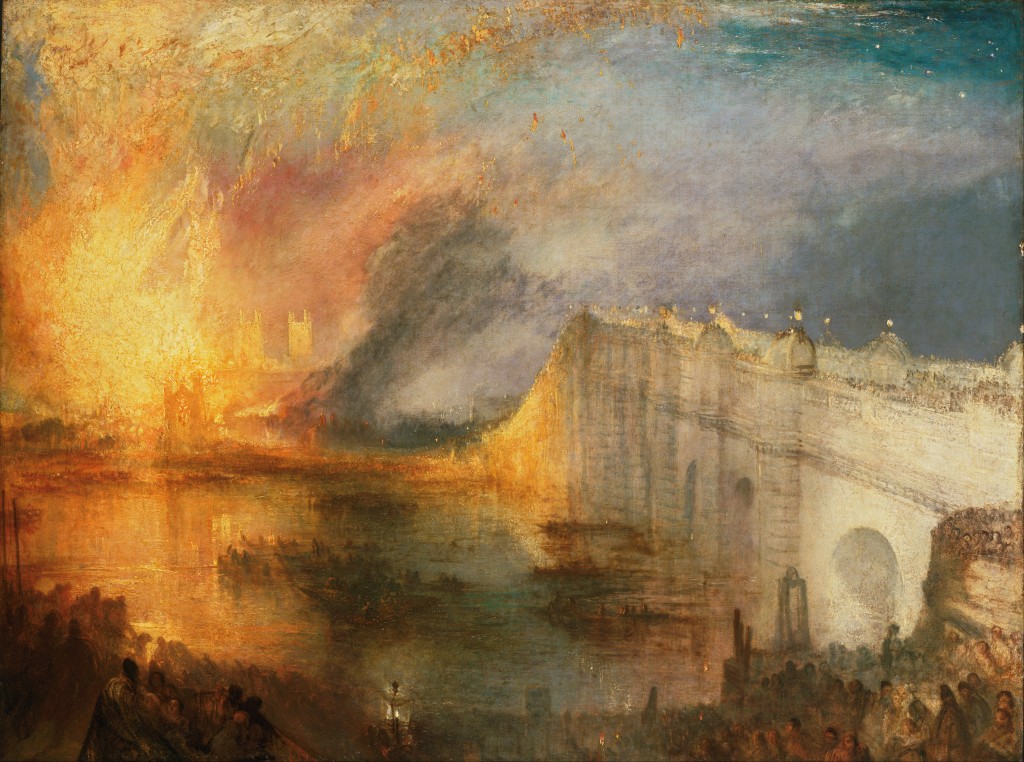 Months later he used the studies to do two paintings, both called The Burning of the Houses of Lords and Commons, and this is the first of the two. It was first exhibited at the British Institution in 1835. The original is now held by the Philadelphia Museum of Art, so thanks to them for the image. It shows Westminster Bridge on the right, leading to the north side of the river where flames have engulfed the the chamber of the House of Commons in St Stephen’s Hall. The twin towers of Westminster Abbey are illuminated by the flames.

Apparently some hapless individual called Richard Weobley, the Clerk of Works, had been a tad careless in disposing of two cartloads of old tally sticks, used in the voting process up until 1826. By 1834 they were totally obsolete and therefore surplus to requirements. Instead of being burnt safely inside two furnaces in the basement, they set fire to the chimney which ran up through the ancient building, and the flames then spread rapidly throughout the royal palace. The result was catastrophic. Mind you, people had been warning for years that the place was a fire trap, with totally inadequate party walls, and saying that it was an accident waiting to happen. And so it proved.

Perhaps it wasn’t really wobbly Weobly’s fault – after all, he delegated the task of loading the tally sticks in to the furnaces to two Irish labourers, Joshua Cross and Patrick Furlong. They were supposed to feed the sticks in to the furnace one at a time, and Weobly looked in on a couple of occasions to make sure all was OK. Eventually Cross and Furlong thought “Blow this for a waste of time” and stuffed the whole pile of highly combustible old tally sticks into the furnaces, shut the furnace doors and wandered off to the Star and Garter public house for a pint or two of beer (thirsty work, burning tally sticks).

Josh, Paddy, you shouldn’t have done that! The next thing anyone knew, crump, the whole shebang was burned to the ground. In its place we got the current building,  designed by architect Charles Barry, and which opened in 1847 for their Lordships and in 1852 for those Common M.P.s. Ironically the building may have to be closed for five years while major works are carried out to make it safe into the twenty-second century. The cost is going to run into billions, but apparently without it the place will fall down. Besides it is riddled with asbestos, is subsiding, and has ancient electrical wiring in its 1100+ rooms. Oh how those Victorians loved jerry-buildings! Last time around, His Maj. (William IV) offered “homeless” M.P.s the use of Buck Palace  (declined). I wonder where we shall put the M.P.s up this time around? Dartmoor Prison springs to mind…

In the meantime, let’s hear it for Joshua Cross and Patrick Furlong, the stars of the show this day in 1834. You succeeded where both Guido Fawkes and the Luftwaffe failed, so we raise a glass of Guinness to a job well done!