Richard Hall loved writing about the weather. Quite apart from filling his diaries with entries about the rain and snow, he kept a retrospective note-book on weather abnormalities. Here is his entry for March 1774: 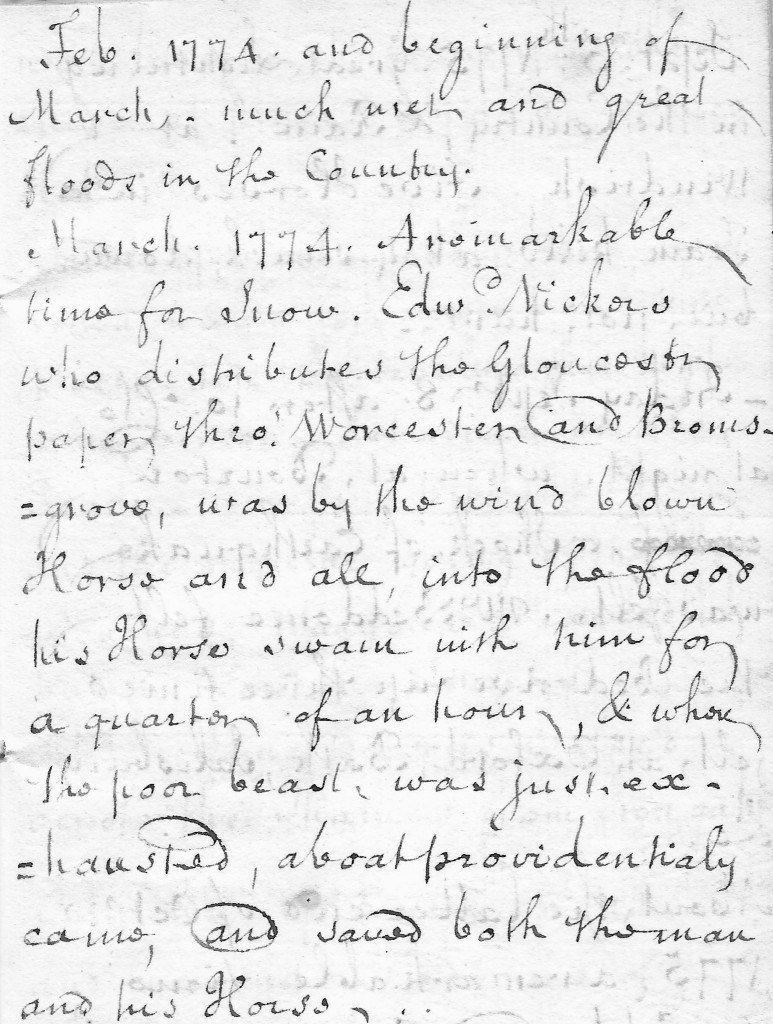 Poor old Edward Vickers (I think it is Vickers and not Nickers!) so let us spare a thought for the poor newspaper boys who still have to deliver the papers in all weathers. Some things never change…

The sun pictured during the 2004 transit of Venus (yup, it’s the black dot at the top!)

“This day prov´d as favourable to our purpose as we could wish; not a Clowd was to be seen the whole day and the Air was perfectly clear”

The ‘purpose’ described by him was the primary reason for his voyage on board the Endeavour: to observe the transit of Venus. Also on board was the astronomer Charles Green, and they had gone to Tahiti on the instructions of George III to observe and measure  the silhouette of the planet Venus as it crossed the face of the sun. Once they had completed their observation they were to head south in an endeavour to find the fabled ‘Unknown South Land’.

The astronomer Edmund Halley had been one of the people clamouring for the expedition. In 1716 he correctly predicted that observing and accurately recording the differences in the transit time, measured from two different places on the earth’s surface, would enable scientists to calculate the exact distance of the earth from the sun, and hence measure the size of the solar system. Halley called on the scientific community to combine forces so that accurate measurements could be taken all across the globe, knowing that the fairly straight-forward trigonometry calculation would give the measurement ‘to unlock the secrets of the universe’.

Halley correctly predicted the transit would next occur on June 6, 1761 and again on June 3, 1769. Ironically he never lived ot see either transit – just as he never lived to see the return of the comet which carries his name and whose trajectory he correctly calculated.

But the scientific community heeded his call, and a whole army of scientists embarked for distant places armed with stop watches and telescopes. The numbers they brought back were duly crunched and analyzed, and a conclusion was reached that the distance between the sun and the earth was in the range of 92,900,000 to 96,900,000 miles – very close to today’s figure of 92,960,000 miles.

The astronomical event occurs in pairs eight years apart, and then not again for another 105 years. It was last observed in 2004. This year is therefore the last chance any of us alive as adults today will see the occurrence, due on 5th/6th June 2012, as the next one will not come round until 11th December 2117 (and December 2125).

In Australia plans are afoot to send a replica of the Endeavour to Lord Howe Island in June to repeat the  earlier work of Captain Cook. The ballot to get on the crew list of 32 was drastically over-subscribed and each has to pay a substantial sum of money for the privilege of going on the voyage. Any ‘softy’ wanting the luxury of a cabin has had to fork out A$8000 For the rest of us, observing the event through smoked glass, or old X-ray film, is probably the best bet.

More information about the imminent transit can be found at:

And because the old maps are often so much more beautiful than their modern counterparts, here is Ferguson’s map showing the 1761 Transit: 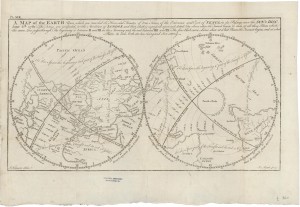 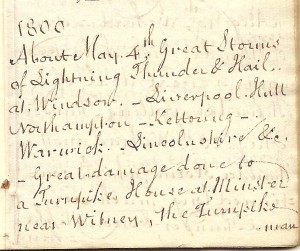 There were of course hundreds of turnpike houses the length and breadth of the country, as each community formed its own Turnpike Trust to carry out road improvements and in return receive the right to impose road tolls.

Although many of the toll houses remain they have often been substantially altered to provide contemporary accommodation. The one pictured here was ‘rescued’ by the Avoncroft Museum near Bromsgrove in Worcetershire. Along with dozens of other recscued buildings visitors get the chance to see buildings ‘as they were’. Well, if it was the Minster Turnpike, I suppose it would have to be “as it was before it got hit by lightning”. 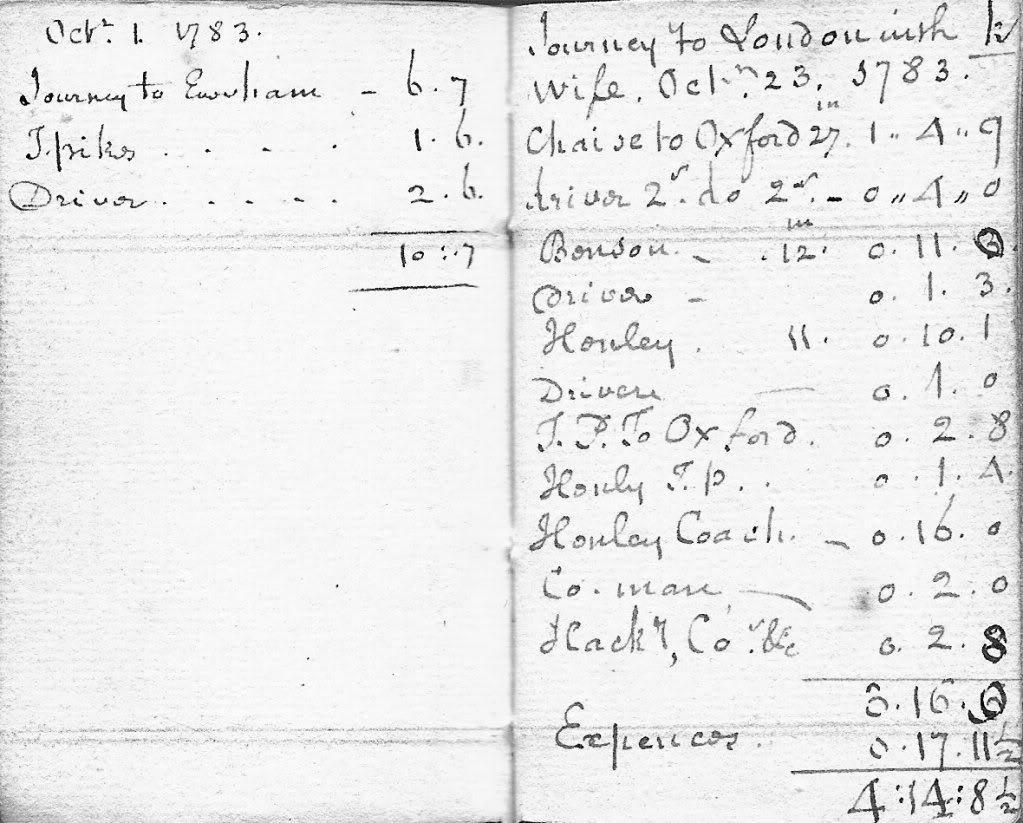 Richard Hall always noted down the expenses of travelling, which included turnpike fees (here, as “TP” or “T Pike”) etc:

Each turnpike cottage would display the rates for travellers. This one, from Northchapel, appears courtesy of the website of the Open Air Classroom http://www.openairclassroom.org.uk/Further%20information/information-turnpike%20trusts.htm

I have always thought that this entry in Richard’s diary (“froze the water in the Chamber pot”)  is one of his most descriptive passages! It does of course raise the question: how cold does it have to be for human urine to freeze? Astonishingly, if you google the question you get a wide variety of answers, from an unbelievable “minus 120 degrees Centigrade” to a very specific “minus 21.1 Celsius, the same as salt water”.  A more considered answer appears to be that it depends on many factors including the person’s diet, age of sample, and effectiveness of the kidneys. But it is certainly an effective way of saying it was extremely cold! Remember,the chamber pot was indoors in an upstairs room, under a bed which would have had curtains round it. In other words, if there was any warmth in the room it should have been close to the ‘gazunder’ and for the contents to freeze and for Richard to note this in his diary it must have been a rare occurrence.

Anders Celsius
It is useful to remember that the measurement of temperature is named after Anders Celsius, a Swedish scientist who actually came up with the idea of a completely reverse scale. In other words he took zero degrees as being the boiling point of water at sea level, and 100 degrees as being the point at which water froze.. It was only after the death of Celsius (in 1744) that the Swedish naturalist Linnaeus suggested that the scale should be reversed since this made it easier for him when measuring hot-houses etc and establishing ideal temperatures for plant growth.
Celsius had been born in Uppsala in Sweden in 1701 and was a brilliant astronomer. He published a paper on  a new method of measuring the distance between the Sun and the Earth in 1730 and went on to study the aurora borealis.He was the first person to link the aurora with changes in the magnetic field of the Earth.
In the 1730’s he travelled widely throughout Europe visiting the main observatories, and took part in a study to measure the shape of the Earth. It confirmed Newton’s thesis that the Earth is an ellipsoid (ie similar to a sphere but flattened at the two poles).Celsius returned to his native Sweden and founded the Uppsala Astronomical Observatory in 1741.

The Observatory in Uppsala

(Celsius scale, topped with zero boiling point).
He subsequently published a paper on temperature scales, calling for an internationally accepted standard which he called ‘centigrade’ i.e. ‘one hundred steps’. In practice it was known simply as’ the Swedish scale’ for many years.Celsius died at the age of 42 and would no doubt be amazed to know that his name lives on more than 250 years later. Celsius is the main temperatue scale used in the world apart from in the United States, (oh, and apparently Belize!)  which still largely uses Fahrenheit in day to day (non-Scientific) matters. And me? Well, I was brought up before schools adopted Celsius in the 1970’s so, like Richard  two and a half centuries before me, I am an unreformed follower of the Gdansk-born scientist Daniel Gabriel Fahrenheit, whose mercury thermometer was invented in 1714. And did you know that both of  Fahrenheit’s parents died on the same day in August 1701, as a result of eating poisonous mushrooms? As they say, not a lot of people know that…. 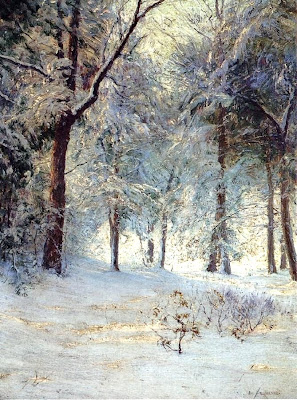 By Sunday he was referring to the fact that “the Snow lay – froze hard. Very cold” and this was repeated verbatim the next day. By 14th December Richard broke off from the weather report to remember that it was his wedding anniversary (“Having obtained help of God…I am spared to see the return of my Wedding Day. Din’d at Mrs Snookes with Mr Beddome. Mr and Mrs Palmer came in the afternoon. Frost continued. A little more Snow. Cold.”) Snow, Frost and Cold were repeated all week, until Boxing Day when he opined “dull, seems likely a thaw, not quite so cold.” before continuing that it “ froze at night or in ye night – a great fog”. For the next few days it stayed exceedingly cold and snowy and then on 30th December there was a “ great fall of Snow, which lay thick” .

It would be quite exceptional today to have three weeks of sub-zero temperatures before Christmas. It is a reminder that Jane Austen, born in December 1775, arrived on the scene when the world was enjoying (enduring?) a mini Ice Age. No wonder the Richard concludes his diary for the year by saying “The Lord has crowned the Year with his Goodness”. 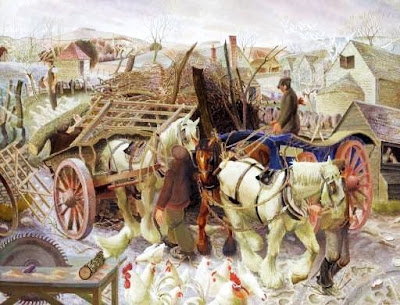 Stanley Spencer, (English painter, 1891 – 1959) A Costwold Farm (Admittedly 1930-31, but apart from the circular saw in the foreground, not much would have changed since Richard’s day).

The Skating Minister, 1796, by Henry Raeburn (National Gallery of Scotland)

And, given that Gillray hasn’t had an outing for several posts, here is  his ‘Fine Bracing Weather’ from 1808. (Courtesy of the Lancashire  Gallery)

The diaries are full of details about life in the eighteenth century and hopefully much of this comes through in The Journal of a Georgian Gentleman. Order it now and you’ll be able to read it for Christmas!

Writing a short while after the disaster, my ancestor wrote in his diary the following words:

It was indeed a major catastrophe. Estimated now as having a magnitude of 8.5 on the Richter scale, the quake hit the port area of Lisbon first and killed around 600 people. The epicentre was hundreds of kilometres away  off the coast and it was 9.30 in the morning when the effects were first felt in the Portuguese capital.

Lisbon was home to perhaps 275,000 people. It was All Saints Day and many of the population would have been attending church. Many buildings collapsed, trapping others indoors. Twenty churches and chapels were destroyed – indeed it was reported that ecclesiastical buildings bore the brunt of the damage and that the brothels of the city went largely unscathed!

The earth shook for nine minutes but just as the survivors thought that the worst was over the city was hit by a giant tsunami which ripped through the sea defences and drowned another thousand residents.

Even worse was to follow; fires triggered by the quake were whipped out of control by high winds and within hours much of the city was engulfed in flames. Tens of thousands of people were killed in the fire – perhaps as many as sixty thousand. The tsunami alone is believed to have killed another ten thousand people by the time it travelled down the coast to Morocco. It was indeed a huge disaster, and one which was to have repercussions throughout Europe.