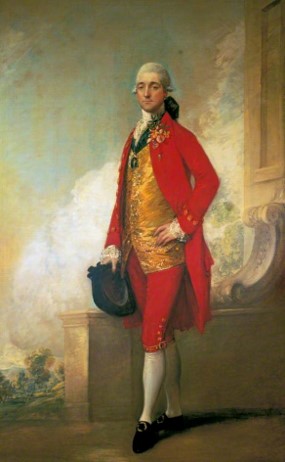 One of the interesting characters I came across doing the research for my forthcoming talk to the Early Dance Centre was one particular Master of Ceremonies at the Upper Rooms in Bath. Captain William Wade had stepped into the breach after a contested election between the Master of the Lower Rooms (William Brereton) and the Master of the assembly rooms in nearby Bristol by the name of Mr Plomer. The original election descended into fisticuffs and the reading of the Riot Act – and at the end of the unseemly squabble Captain Wade was chosen as a consensus candidate acceptable to both sides. He took up his office in 1769. 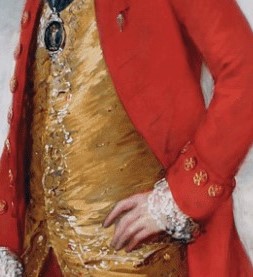 And what a pretty boy he was! Here he is, looking magnificent in all his finery, in a painting by Thomas Gainsborough dating from 1771. I mean, THAT is what I call a waistcoat! Captain Wade quickly earned the nick-name of “the Bath Adonis” – but he was eventually forced to retire from his position after rather publicly misbehaving. It must have been all rather humiliating for Mrs Katherine Wade, who had given birth to five of his children and who was very much still alive when her husband’s eyes started to wander…. 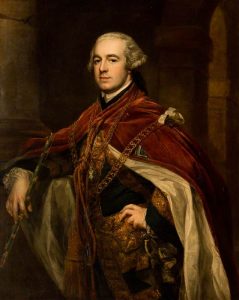 John Hooke Campbell (1733-1795); by Francis Cotes, courtesy of the National Galleries of Scotland.

He was named in the divorce proceedings of Elizabeth Eustacia, wife of John Hooke Campbell.  Mr Campbell  was a dour Scotsman and when he had married Devon girl Elizabeth in 1762 I don’t think he knew what he was taking on. They had three daughters – Eustacia, Charlotte and Louisa. I suspect that his wife’s world fell apart when both her parents died in the same year – 1764, and although there is an early reference to a boy called Matthew I suspect that he died in infancy and there is nothing to suggest that John Hooke Campbell was ever going to get a male heir. He seemed preoccupied with changing his name – from  John Hooke Campbell to John Campbell-Hooke, no doubt conscious of his  dynastic importance. A double-barrelled name always looks good!

To give him his full title he was The Right Honourable the Lord Lyon King of Arms. As such he was the head of Lyon Court,  the most junior of the Great Officers of State in Scotland. He was the official with responsibility for regulating heraldry in Scotland – issuing new grants of arms, and serving as the judge of the Court of the Lord Lyon, the oldest heraldic court in the world. Dare one assume that perhaps he was too busy with his heraldic work to spend much time  and attention on his wife, who was four years younger than him and who clearly liked to party, party?

The Tea Room at the Assembly Rooms, Bath: per Wikimedia

The couple were leading separate existences – and in time Elizabeth fell for the charms of Captain Wade. She would rent premises in Bath – or near Brighton where the good Captain  also held the position of MC – and this gave the Captain plenty of opportunity to pop round for a quick bit of nookie whenever he got the chance. And all of this was to come out into the public arena when  husband John finally woke up and smelled the roses. He sued the Captain for damages in criminal conversation – a sort of precursor to divorce, and this entailed a full trial. This involved just about every servant  in the household being called upon to give evidence. What is clear is that the below-stairs staff were preoccupied with  looking through keyholes and pressing ears against the walls, listening in to amorous conversations and ‘noises off’. Each servant was called in turn, and made depositions about  hearing inter-connecting doors opening and closing, of the young children being moved up to the garret out of the way, of shadowy figures holding candles being observed in corridors and of midnight moaning and squeaking bed-frames. The evidence ran to an impressive seventy pages, starting off with the assertion that Elizabeth ‘was and is a very loose woman of a lustful and wicked disposition’, who had committed ‘the foul crime of adultery’.

And all of this was reported in trial accounts which became best sellers, as prurient readers could  learn about every aspect  of the affair.

The reports of this and numerous other adultery trails were then consolidated and published in seven volumes. A quick look on the web suggests that a set of six of the seven are available for the discerning reader, at a not unreasonable price of $2500. 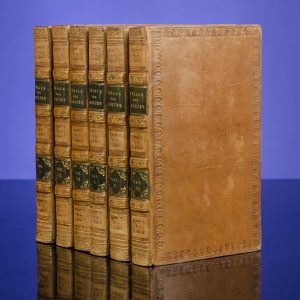 John won his case in 1777 and subsequently petitioned Parliament for a divorce, leaving his ex-wife free to marry Captain Wade once the original Mrs Wade had died in 1787. Before the year was out,  the ‘Bath Adonis’ had married Elizabeth, on 30 June 1787 at St Marylebone in London. Sure, he was sacked as MC in Bath for bringing his office into disrepute; however he  continued as MC in Brighton, thereby proving that somewhat different standards of propriety existed in the South coast resort compared with what was acceptable in the ever-so-respectable city of Bath. I make no comment about whether there has been much change there then !

For the next twenty years Captain Wade was responsible for arranging  entertainments  at assemblies in Brighton at both the Castle Inn and the Old Ship. He died in Brighton on 16 March 1809

All this scurrilous talk of scandalous behaviour is far too detailed to get more than a passing mention in my forthcoming talk to the Early Dance Circle on 1st March 2019  – but it was great fun doing the research, since I may well be able to use it in my next-book-but-one, on Sex and Sexuality in the Georgian Era. Meanwhile if you are free and in London on the evening of 1st March – do come along. The talk is at Swedenborg Hall, Swedenborg House, 20 Bloomsbury Way, London WC1A 2TH and starts at 7.15 Details can be obtained from the  EDC Secretary: secretary@earlydancecircle.co.uk or by ‘phoning on 020 8699 8519 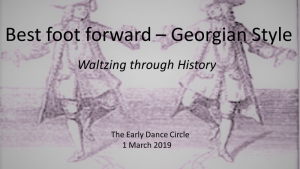