On Monday 24th May  1773 Richard Hall recorded in his diary that he spent some time in the evening at the Boars Head at Eastcheap (in the company of Messrs Warne, Rybright, Button and Lopard).

The Boars Head was one of London’s most famous Public Houses, featuring as the setting for Henry IV Parts 1 and 2, as well as being the watering hole of one of Shakespeare’s most famous and much-loved characters, Sir John Falstaff. It is thought that several of Shakespeare’s plays, including the Merry Wives of Windsor were performed at the Boars Head in the Bard’s lifetime and by the time Richard visited in 1773 it had become a sort of pilgrimage for Shakespeare fans to visit. Indeed, up until 1784 grand Shakespearean Dinner Parties were regularly held at the Boar’s Head.

The original Boar’s Head Tavern was built in the reign of Henry VII but was destroyed by the Great Fire of 1666. Shortly after that date it was rebuilt in brick, with a carved stone bas-relief of a boar’s head set above its first-floor windows.

The original carving survived when the building was finally demolished in 1831 – ironically as part of the same road widening scheme (linked to the new London Bridge) which saw my family’s home at One London Bridge razed to the ground. The carving belongs to the Museum of London, and the image above appears courtesy of Guildhall Library. Having been locked away for the best part of two centuries the carving was exhibited at the  Globe Theatre in 2010 as part of the promotion for that year’s revival of Shakespeare’s Henry IV.

In the 1860’s the architect R L Roumieu designed a splendid gothic monstrosity at 33 Eastcheap – intended as a vinegar warehouse for Messrs Hill & Evans -and included a boars head in the decoration of the facade, linking the building to the old tavern which had previously stood on or near the site. The photographs appear courtesy of the Ornamental Passions Blogspot here.

Eastcheap was the site of London’s main Medieval meat market and a major centre of London commerce. ‘Cheap’ was the Saxon word for market. In the map below, the Boars Head was situated in Great Eastcheap, running westward from Gracechurch Street. 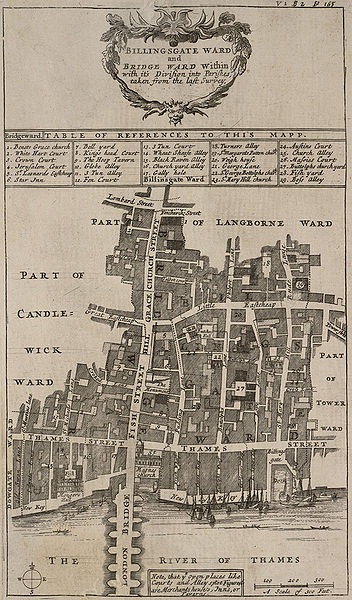 John Stow’s Map of Eastcheap from 1720

Years later, the writer Washington Irving describes a visit to the Boars Head in his “Sketchbook of Geoffrey Crayon.”

“…I at length arrived in merry Eastcheap, that ancient region of wit and wassail, where the very names of the streets relished of good cheer, as Pudding Lane bears testimony even at the present day. For Eastcheap, says old Stow, “was always famous for its convivial doings. The cookes cried hot ribbes of beef roasted, pies well baked, and other victuals: there was clattering of pewter pots, harpe, pipe, and sawtrie.” Alas! how sadly is the scene changed since the roaring days of Falstaff and old Stow! The madcap roisterer has given place to the plodding tradesman; the clattering of pots and the sound of “harpe and sawtrie,” to the din of carts and the accurst dinging of the dustman’s bell; and no song is heard, save, haply, the strain of some syren from Billingsgate, chanting the eulogy of deceased mackerel.” 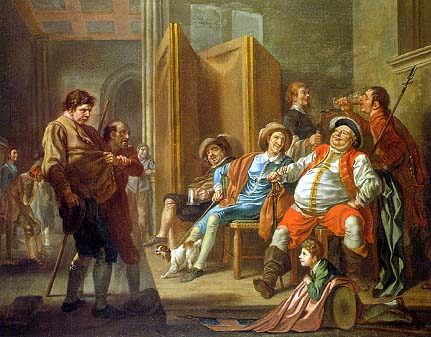 Well I hope Richard enjoyed convivial company that evening 240 years ago: I will raise  a glass to him, the plodding tradesman, and will regret that he was not more of the madcap roisterer! 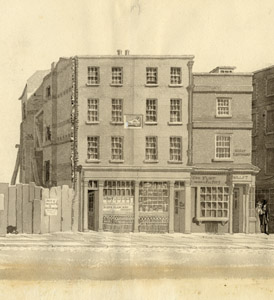 Finally, a picture of the Boars Head in 1829 shown courtesy of www.bishopsgate.org.uk  By that time it had already fallen into disrepair, was no longer used as a tavern, and been sub-divided into shops. The plaque of the boars head is still visible in the centre of the building.