Visiting my Chiropodist (whoops, forgot, they now call themselves podiatrists!) reminded me that having painful corns is nothing new. I rather liked this 1793 etching entitled the Corn Doctor: 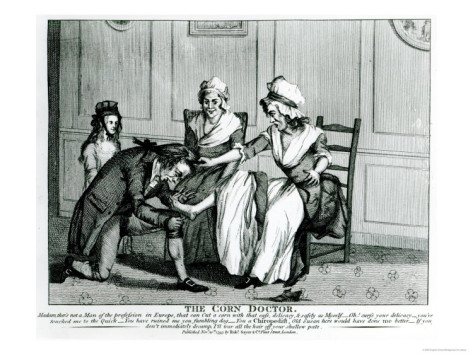 The narrative reads: “Madam there is not a man of the profession in Europe, that  can cut a corn with that ease delicacy and safety as Myself “

– “Oh Mercy  – Oh Curse your delicacy – you’ve   touched me to the Quick – You have ruined me you fumbling dog  – You a Chiropodist, Old Susan here would have done me better – If you don’t immediately decamp I’ll tear all the hair off your shallow pate.”

Poor podiatrists – centuries of being blamed and ridiculed – they deserve better!

For my ancestor Richard, foot care was apparently not a priority – he washed his feet but rarely, and even reckoned it was worth a diary entry if he did so!

By the middle of the eighteenth century books were appearing on the subject of chiropody – including  this splendid one belonging to Marie Antoinette dated 1782 entitled L’Art de Soigner les Pieds. If you have $16,500 to spare you can buy it through Bauman’s … 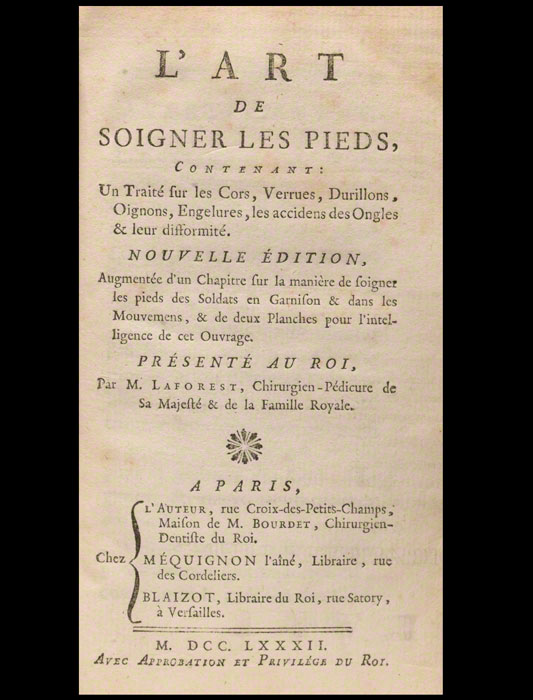 And, as Yellow Pages had not been invented, you might find your corn-cutter via his trade card, such as this one 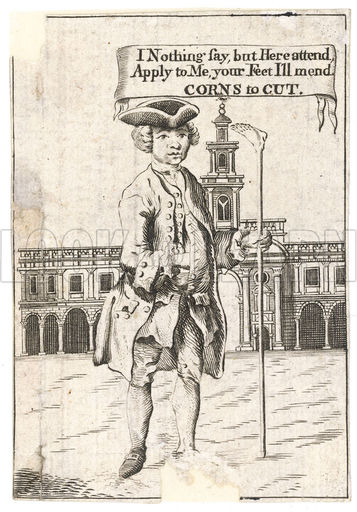 Postscript: among the recently discovered papers belonging to Richard Hall (yes, another whole cache!) was a letter to Richard from his niece (by marriage)  called Anna Seward. She was a well-known Sapphic poet. She writes in 1800: “At present I am suffering a pained imprisonment which has lasted 5 weeks. From mal-formation the nails on my feet have a propensity to grow in. It produced a case which demanded a surgeon. He has cut my toe four times without being able to remove the deep-seated cause of  the sore. Thus I am deprived of all powers of taking exercise by which my general health suffers….” Ouch!!!

She ends her letter with a nice gesture, considering the painful ingrowing toenails, by  saying that she wishes to send a new gown for either Richard’s wife or his daughter, and enquires how this should best be sent, by what carriage or coach.