We are used to all sorts of indices measuring inflation – retail prices being just one. I always like the Mars Bar Inflation Index, looking at the fluctuating cost of a simple piece of confectionery, after factoring in all the variables such as shrinking bar sizes, alterations to the chocolate content etc. I seem to recall buying Mars bars for around six (pre-decimal) pennies when I was a child – equivalent to two and a half  pence nowadays. Modern bars are now roughly 20% smaller and cost around sixty-five pence. So the inflation rate is around 33-fold over a sixty year period.

And of course we also have the house prices index. Suffice to say that the first house I bought, just half a century ago, cost me £3000. It now can be yours for the bargain price of  half a million pounds – a rise of 166-fold in a fifty year period. 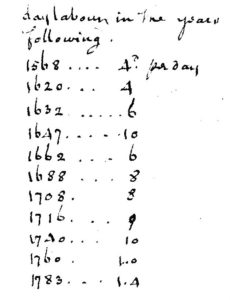 Richard Hall’s calculation of agricultural wages from around 1785

Another index is that of agricultural wages. I was interested to see that my ancestor was sufficiently aware of rising agricultural wages to jot down the  figures. From a day-rate of four pence (one groat) in 1568 it rose by fifty per cent in the next one hundred years, so that it was sixpence a day around the time of the restoration of the monarchy. Over the next one hundred year period it had gone up to one shilling a day – in other words it had doubled in a century, but had trebled over the two centuries.

By 1783 Richard was recording a day rate of one shilling and fourpence and I thought it would be fun just to look at what agricultural wages have done in my lifetime. In reply to a parliamentary question put to the Min. of Ag. and Fish in 1960 I see that the average farm worker toiled for 46 hours a week to earn an average of £8 – for the entire week. The same lucky blighter was only working a 44 hour week by 1969 and yet was being paid  £11/11/-.  Putting that in context, today’s minimum wage is £8.72 per hour which, if you worked a 44 hour week, would give you £383.68 in your pocket every week. So, on my calculations, wages for an agricultural worker have gone up  more than thirty three times over, during a fifty year period.

I am not sure how many working hours there were in a farm workers day in 1760, but let us assume that it was ten. In the two hundred and sixty years between Richard’s calculation of a shilling-a-day in 1760 (five pence in decimal currency rates) and 2020, the rate has risen from 0.5 pence an hour to 872 pence an hour. So, if Richard was concerned at the rate of inflation in his lifetime, you have to wonder how on earth he would react if he knew that wages would be 1744 times higher by the time his great great great great great grandson started rifling through his jottings and memoranda …

And to end with, no post is complete without a Rowlandson, so here is his: Rural Sports, or a Pleasant Way of Making Hay, printed in 1814 and shown courtesy of the excellent  Metropolitan Museum 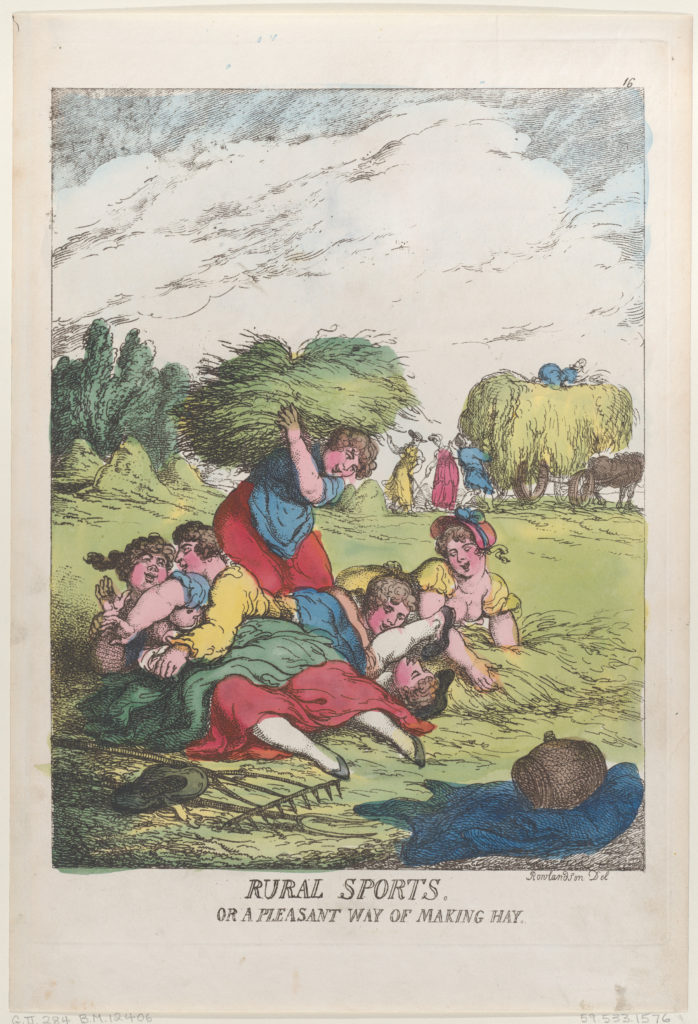 Apparently, not such a hard life after all, being a farm labourer…..