The cost of travel in the 18th Century

I am always amazed at how much it cost to travel in the Georgian era – at least, if you wanted to do it in style rather than in the back of a hay waggon. In 1784 Richard Hall and his wife set off for Bourton on the Water from London – a two-day trip involving meals and accommodation along the way. This is his note of the expenses: 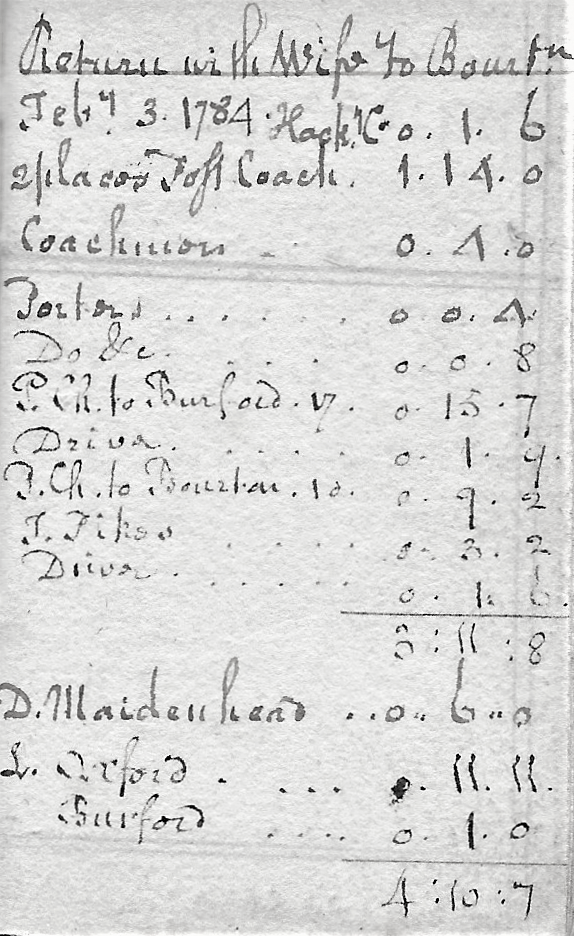 So, he got a hackney carriage to take him from London Bridge to the coaching Inn (cost so far 1/6d) where he would have caught the Post Coach to Oxford, going via Maidenhead. The coach cost seventeen shillings per person, hence £1/14/-  for the pair of them. That would have included the cost of the overnight stop. He paid the coach man 4/- and tipped the porters for loading his luggage on and off the coach 4pence and 8pence. The Post Chaise to Burford set him back the odd sum of 15/7d with another 1/9d going to the driver. The stage to Bourton from Burford cost another 9/2d, plus a shilling for the driver and turnpike fees of 3/2d. In all, the actual cost of travel was £3/11/8d.

By the time you add on Dinner at Maidenhead and Supper at Oxford and what looks like a top-up of probably bread and cheese at Burford, the entire journey cost Richard £4/10/7d. Multiply that by perhaps eighty to allow for inflation and you get a total of just over £350 in modern money – making it comparable with  two first class rail tickets today!

Richard, being Richard, noted how many bags and cases accompanied him on the journey (eight items) and even lists all the clothes he required whenever he travelled away from home.