On the morning of 10th March 1777 a crowd, estimated as being twenty thousand strong, gathered by the naval dockyard in Portsmouth. Towering above them was the mizzenmast struck from the warship HMS Arethusa, specially erected for the purpose. And the purpose? To hang one John Aitken, otherwise known as John Hill, otherwise known as John the Painter, for arson in the royal dockyards.

It is hard to see Aitken in a heroic light – he was 24 years old, a highwayman, a burglar and, on at least one occasion, a (self-confessed) rapist. He was also responsible for a one-man wave of arson and bomb attacks apparently aimed at weakening the British Navy – and hence helping the cause of the revolutionary forces in the American War of Independence. Whether he was genuinely motivated by political ideology, or whether he just wanted to attain notoriety and to escape from a hum-drum existence is unclear. Certainly he had spent a couple of years in America – after he fled there to avoid prosecution for raping a young girl who was looking after some sheep in a field near Winchester.

He had had a somewhat deprived childhood in Edinburgh, where he was born, the eighth of twelve children, in 1752. His father soon died, which curiously gave young John a boost in life because it meant that he was eligible for free education at a charity school set up by George Heriot which provided help for the poor fatherless children of Edinburgh (or, as the Scottish dialect has it, the “puir, fitherless bairns”). When his schooling finished he tried his hand at various jobs, including that of a house painter, but drifted into a life of petty crime. 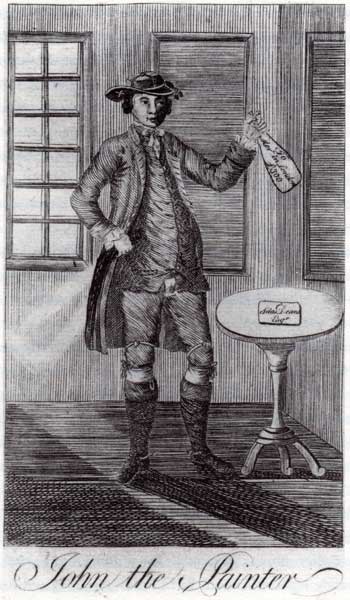 As a 21 year old, running away in order to avoid being imprisoned for rape, he secured a passage to Jamestown in Virginia on the basis of signing an Indenture of Apprenticeship, but discovered that he was not suited to a life of servitude working on the tobacco plantations. He ran away and spent a couple of years drifting through Philadelphia, Boston and New York.

In 1775 he returned to England and embarked on a career of political arson. Not only did he aim to destroy naval ships in harbour, but also to cripple the repair of ships by burning down the dockyards and ropewalks upon which the navy depended.

He comes across as something of a loner desperate to make a name for himself – in a pub he apparently heard a group of people talking about how vulnerable the Navy was to the ravages of fire, and in his words “I spent two days in the contemplation of this malicious design, and promised myself immortal honour in the accomplishment of it. I beheld it in the light of a truly heroic enterprise, such as never would have been equalled to the end of time. I was persuaded it would entitle me to the first rank in America, and flattered myself with the ambition of becoming the admiration of the world!”

He seems to have been able to gain access to a number of naval installations in Bristol and Portsmouth and, using his knowledge of inflammable materials gleaned from his time in the paint trade, he succeeded in fire-bombing a small number of installations.

His first attempt, at Portsmouth, had to be aborted when he accidentally got locked in the ropewalk and had to hammer on the door to be let out!  He stayed close by, and returned on 7th December 1776 when he managed to set off three incendiary devices. One building was destroyed – but hardly the mass conflagration of the whole city and dockyards which Aitken apparently intended.

He later made his way to Bristol where he triggered off a number of small fires, all of them extinguished without serious damage. The authorities were convinced that a whole gang of terrorists were on the loose – a number of wholly unrelated fires were also attributed to him. The panic caused by the reports of the arson attacks helped the government push through the Treason Act, enabling suspected rebels to be seized without the right of habeas corpus (in other words, without the courts having the right to question the legitimacy of the imprisonment). Eventually a reward of one thousand pounds was posted, his description was circulated, and the Bow Street Runners were employed to track him down. Before long, Aitken was apprehended while travelling through Odiham in Hampshire and taken in for questioning.

At first he proved unwilling to cooperate but a government agent managed to gain his confidence while in prison and to secure sufficient details from him to enable a conviction to be obtained.

The gallows created from the mast of HMS Arethusa, some sixty feet above ground level apparently made it the highest ever used for an execution. Clearly the authorities wanted people to see the punishment from as far away as possible – which perhaps explains why, following his death, the corpse of John Aitken was suspended in chains at Fort Blockhouse, overlooking the harbour at Portsmouth, where it remained for many years, a gruesome reminder of the fate which awaited terrorists in the 18th Century.

I see that arson in the King’s Dockyards featured earlier in the 1770’s – the Lewis Walpole Library site has this etching entitled “The blind Justice & the secretaries One Eye & No Head examining the old woman and little girl about the fireing  of Portsmouth Dock Yard.” 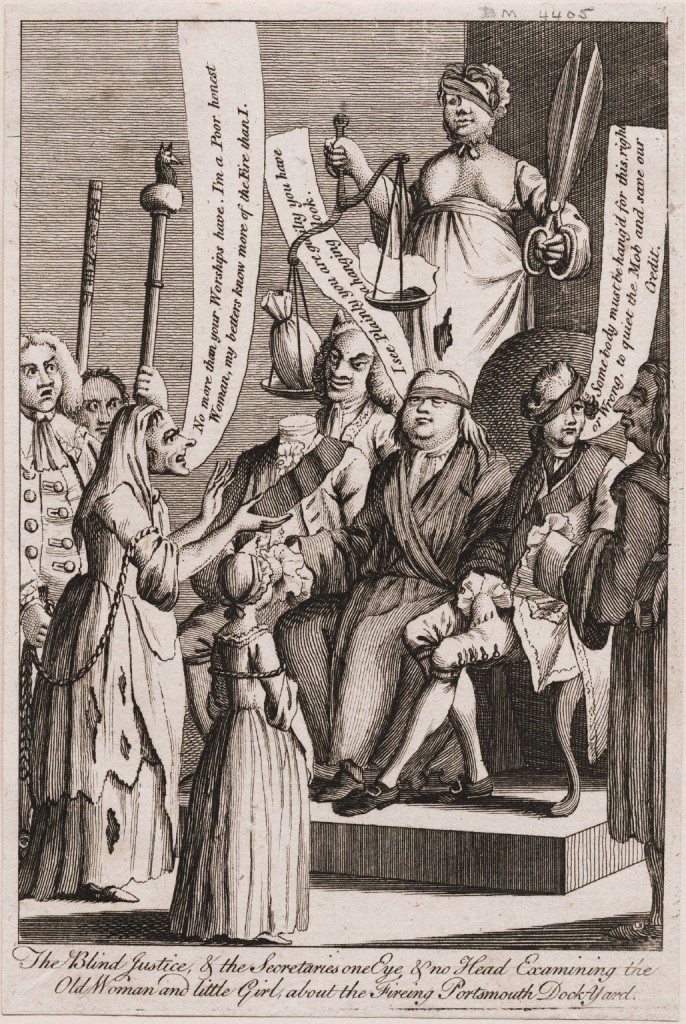 The incident referred to occurred in June 1770 but the etching came out a year later. It shows Justice as being not just half-blinded but as an ugly old hag with her scales of justice heavily tipped by a bag of gold coins. The secretaries include the blind magistrate Sir John Fielding (wearing a visor), and the Earls of Rochford, Sandwich and Suffolk. They are examining an old crone and her daughter who have been arrested on a charge of setting fire to a part of the dockyard at Portsmouth. Fielding is saying ” I see plainly that you are guilty. You have that hanging look”. One of the earls says “Some body must hang for this, right or wrong, to quiet the mob and save our Credit.” In vain the old crone claims that she is a poor honest woman and that her betters know more about the fire than she does….

Parliament has always taken a dim view of burning down the Royal Navy. The “Dockyards etc. Protection Act 1772” set out a comprehensive list of crimes punishable by death, such as causing a fire or explosion in a naval dockyard, magazine, warehouse, or ship –  and oddly it remained a capital offence even after the death penalty for murder was abolished in 1965. The 1772 Act was finally repealed by the  1972 Criminal Damage Act. It rather looks as though John the Painter was the only person ever executed under this particular piece of legislation, which is strange when I can recall from my days as a law student that we always had to remember that the death penalty still existed in certain circumstances such as arson in Her Majesty’s dockyards. No matter that it hadn’t happened for  two centuries, you needed to remember it!

The paper cut-outs were all made by my ancestor Richard Hall in the 1780’s.