The four seasons, by John Collet, who died 235 years ago today.

A look at a quartet of John Collet prints “in the possession of Carington Bowles” and published in 1778: 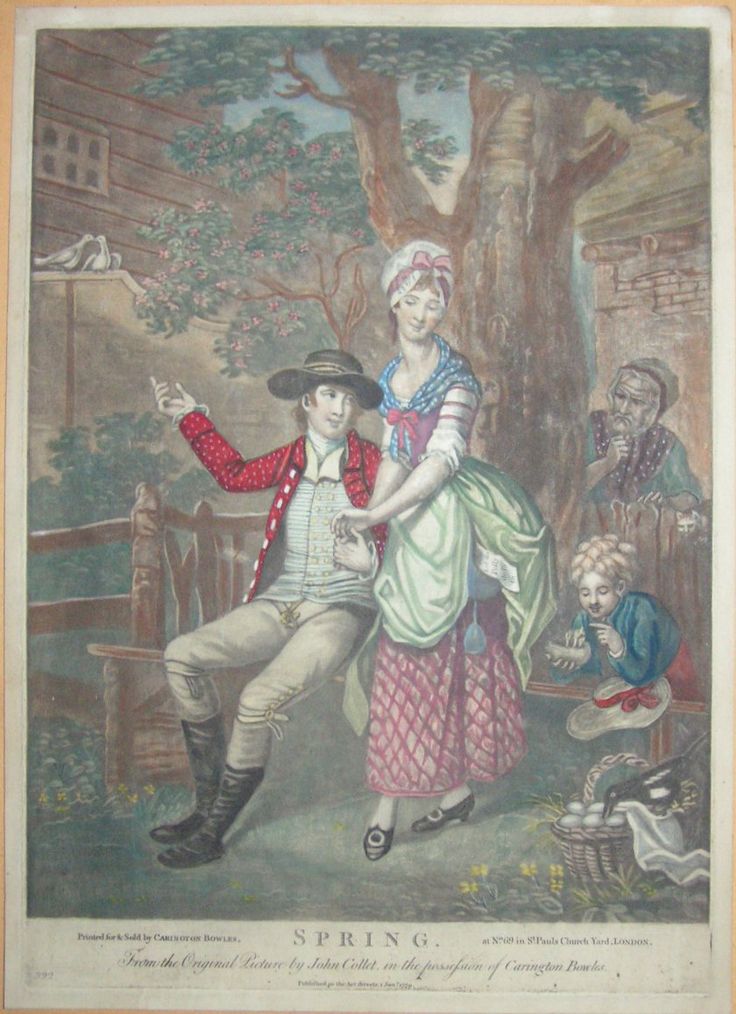 It shows a young swain sitting on a bench under a tree holding the hand of a pretty young girl. In her pocket is a piece of paper with the words “Let us Polly do so to.” On one side a young boy delicately plays with a bird’s nest, while below him in the foreground a magpie sits besides a basket containing five eggs. The man points with his hand to a pair of birds “playing lovey-dovey,” while an angry old lady observes the scene of the amorous couple, clenching her fist. 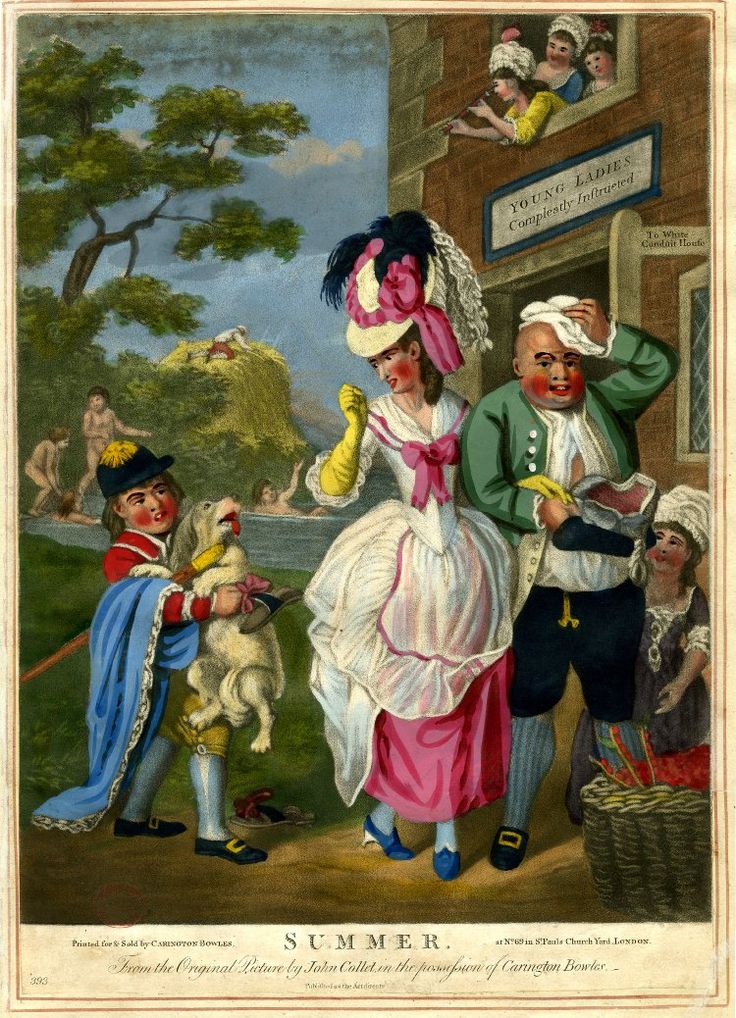 The young boy is laden down with items, including the house dog, along with clothing he is carrying for the lady, plus patterns for her to put on over her shoes for walking through puddles. He has already dropped one. Three girls armed with a telescope look out of the window of the school where they are being educated (“Young Ladies completely instructed”) at a  a trio of naked lads swimming and posing in a nearby swimming pool.In the background a farmer atop a haystack is packing more hay onto the stack, while in the foreground cherries are being sold on sticks from a basket. 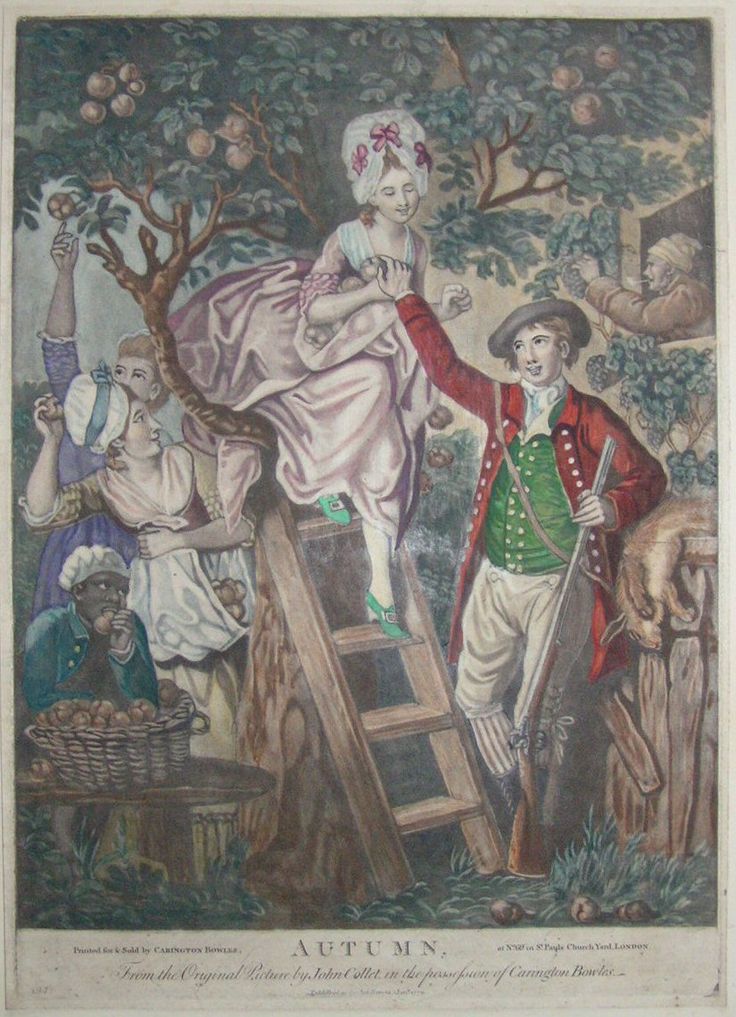 Here we have Autumn. It is the season of plenty, and the young man with a gun has shot a rabbit. He helps a young lady down the ladder where she has been picking fruit. His hand is ambiguously holding either her right hand, or her breast, or the ‘forbidden fruit’. The young lady’s apron  is full of harvested fruit, which cascade down onto the ground. A young black boy looks up at the couple, while appearing to eat one of the fruit. Behind him two girls are also picking fruit, while a man in the window smoking a pipe is cutting off  bunches of grapes growing on the vine. 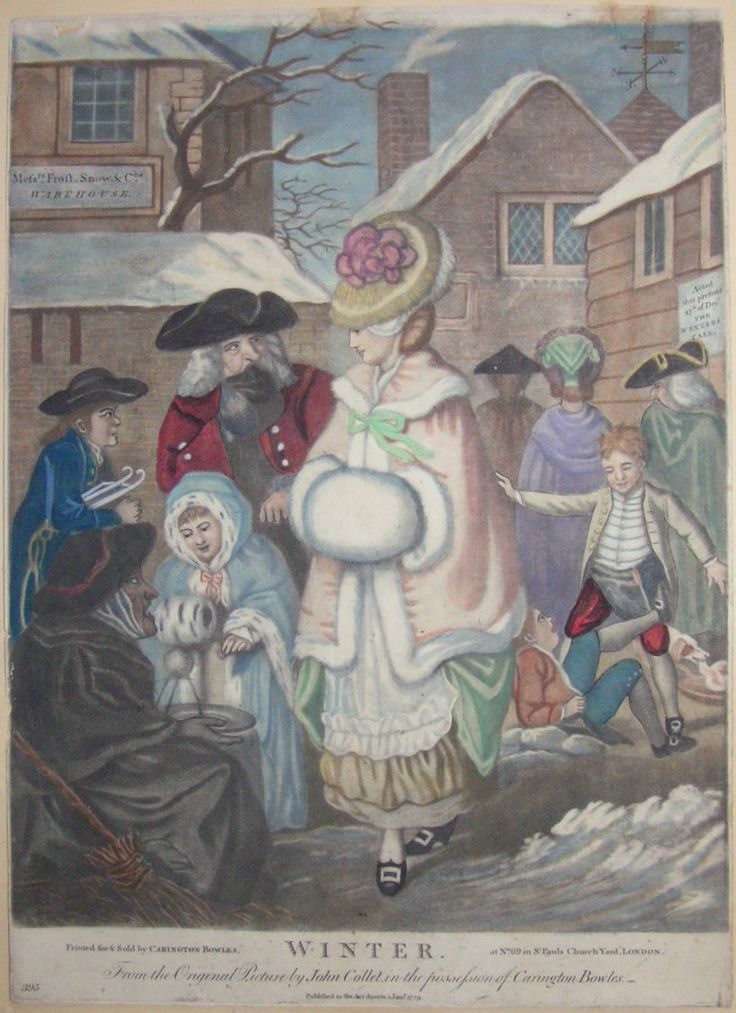 A mother and her daughter wearing fur trimmed pelisses and carrying muffs walk past a warehouse called Messrs Frost, Snow & Co. A poster on the building opposite advertises a performance of The Winters Tale. Snow lies on the roofs and is piled in the street, although some effort has been made to sweep a passage clear, using a besom. One boy has slipped over, and another hurries in from the left, carrying blades which presumably belong either to a sled or to a pair of skates. A dog has stolen a  joint of meat and is eagerly devouring it.

The images are shown courtesy of the Lewis Walpole Library/Yale Center for British Art.

John Collet was born in 1725 and became a pupil of John Lambert. He studied art at St Martin’s Lane. Many of his subjects have a Hogarth-esque quality and he often shows scenes of debauchery, drunkenness and immorality. Publishers such as Carington Bowles often produced engravings based on his pictures, and Collet developed a reputation for his humorous and sometimes gently satirical depictions. He was fortunate enough to inherit a large fortune when a relative died, meaning that he was freed from the financial pressures which dogged so many artists. He died in Cheyne Row, on 6 August 1780, aged 55.