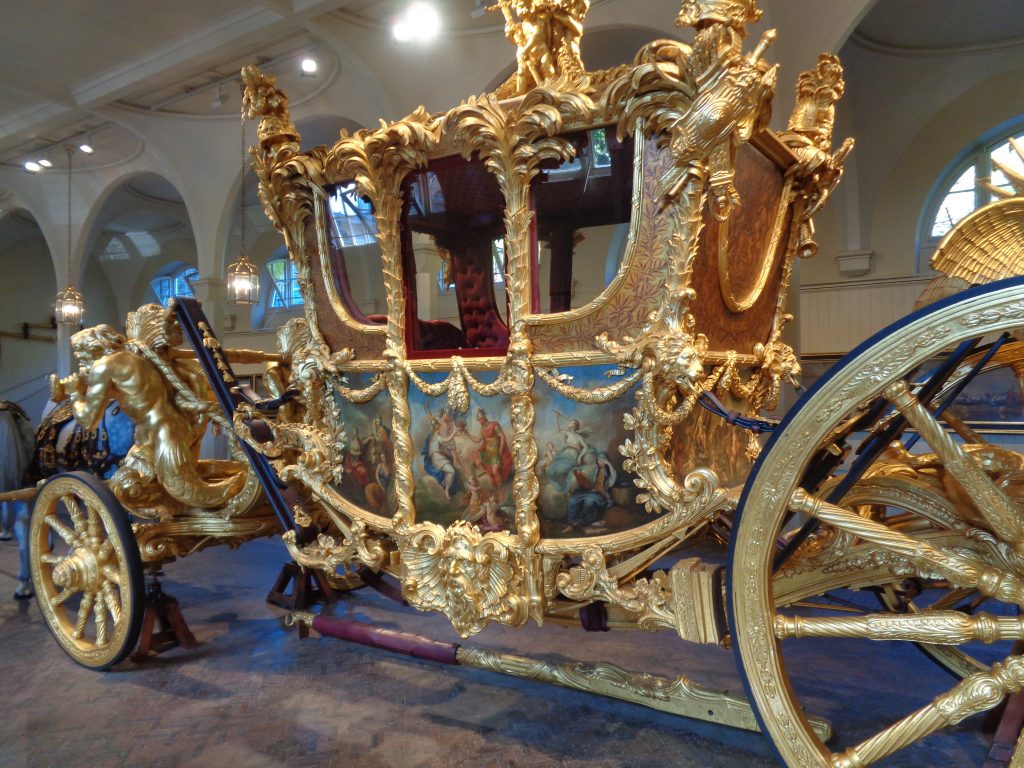 On Tuesday, it was great to get the chance to get up to London and visit the Royal Mews, next to Buckingham Palace, at the invitation of the Royal Collection Trust. Complete with Press pack, it gave the opportunity to have a close look at the State landaus, Semi- State landaus and royal carriages used by the royal family from the Victorian period to the present day. OK so I wasn’t especially impressed by various  modern cars driven by Her Maj, and some of the modern replica carriages, complete with electric windows, hydraulic suspension, heating and so on are “interesting” but somehow are not ‘the real thing’… 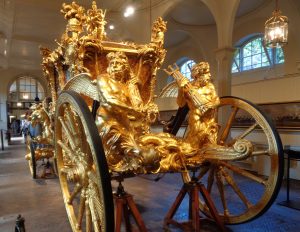 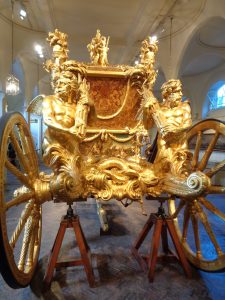 For that, I didn’t think you can beat the Gold State Coach, used by every monarch at his or her coronation since George IV. I remember seeing it  when Queen Elizabeth attended her coronation back in June 1953 – and I recall playing with  a tinplate model, complete with eight miniature grey horses. Seeing the original, close to, was fascinating. 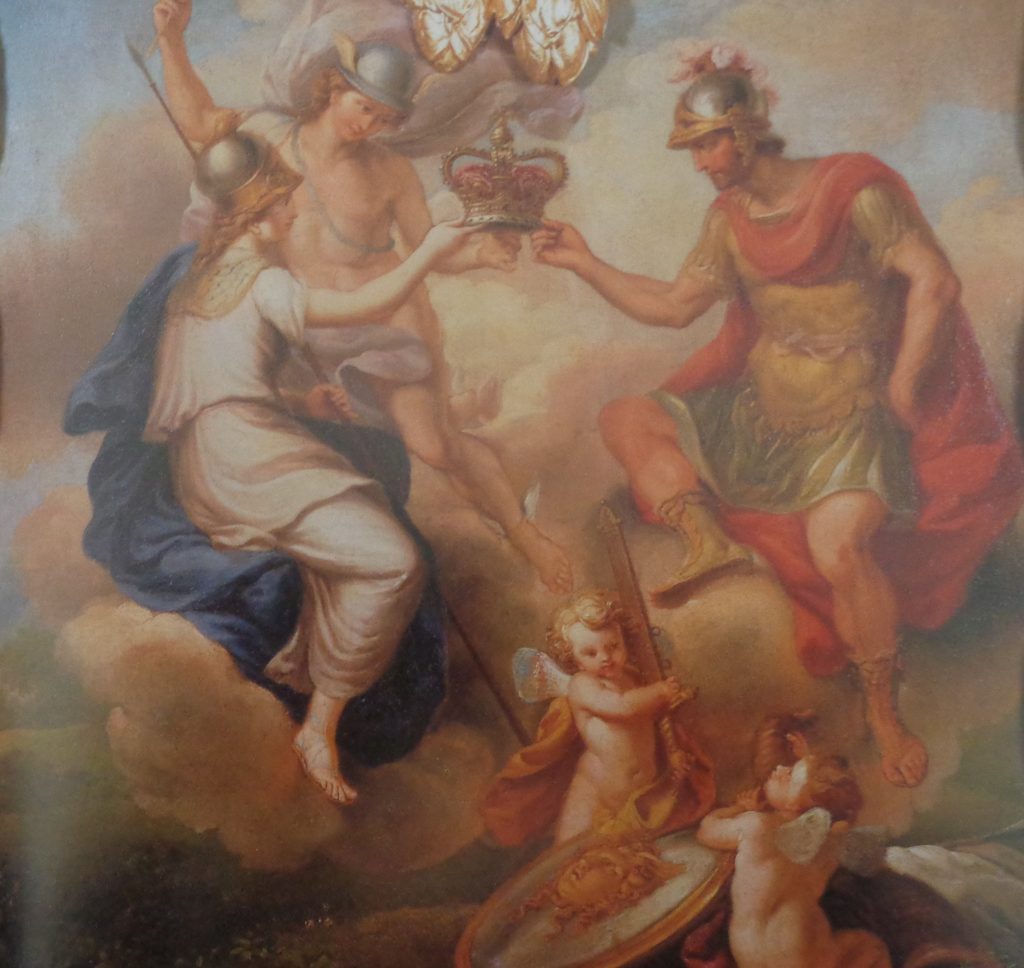 is housed in the Royal Mews in its own room, and it is vast, with the main carriage having a body 24 feet long and 12 feet high. It weighs in at a massive four tons, and needs to be pulled by four pairs of Windsor Greys, each of sixteen hands. That’s an impressive horse power, but necessary for something of that weight. Indeed once those giant golden wheels start rolling, it takes some stopping. A footman has to apply the brake – and even then it takes 30 feet to roll to a halt.  For that reason the carriage is only ever drawn at walking pace, so that the grooms can walk along side it and are on hand in case anything goes amiss. Four pairs of postilions  ride the horses, and by the time you add in footmen/grooms and so on, it is a highly labour-intensive means of moving the monarch from Palace to Abbey.

Somehow it is rather satisfying to know that it is excruciatingly uncomfortable. William IV, otherwise known as ‘the sailor king’ described the motion as being like being tossed in heavy seas, while Queen Victoria hated it for its ‘distressing oscillations’ and in the end transferred her affections to other means of transport such as the Imperial Coach. Poor George VI – he reckoned that it gave him “one of the most uncomfortable rides I have ever had in my life.”

The irony is that it was never actually available for use at the coronation of the monarch who commissioned it – George III. He ordered it to be made in 1760, and splashed out £7562 – that is the equivalent of well over a million pounds nowadays, and for that you got a really spectacular set of wheels, adorned with tritons, cherubs and mythical creatures. The actual coach was designed by architect William Chambers, and was constructed by coach-builder Samuel Butler

Construction took longer than anticipated and George didn’t get to use his new toy until he attended the State opening of Parliament in 1762, and it must have caused quite a stir. The panels are magnificently decorated by the Italian artist Giovanni Cipriani – full of allegorical images of Peace and of Roman gods of War. What I found especially impressive is the thought that there are still people with the skill to repair and renovate a masterpiece like this. My first father-in-law was a coach builder, and I spent many a happy hour watching him apply layer after layer of paint to hand finished panels, rubbing them down with meticulous care, and then using gold leaf to form decorative devices. I remember that the gold leaf was kept inter-leaved in something the size of  a small notebook, and was applied with the softest of brushes. Goodness knows what gold leaf like that would now cost, given the current price of gold…. The end result was as smooth and reflective as a mirror, and it is good to see that these skills are still being practised.

The other rather impressive thing is that all the way round the display room is a huge long painting, by Richard Barrett Davis, entitled “The Coronation Procession of William IV”. Above is just a tiny extract. It was painted in 1831 and shows the procession – all the great and the good, occupying carriage after carriage – as well as showing the golden State Coach in splendid pomp. The catalogue accompanying the display also shows this picture of the carriage being used to convey George III to the Houses of Parliament on 25 November 1762: 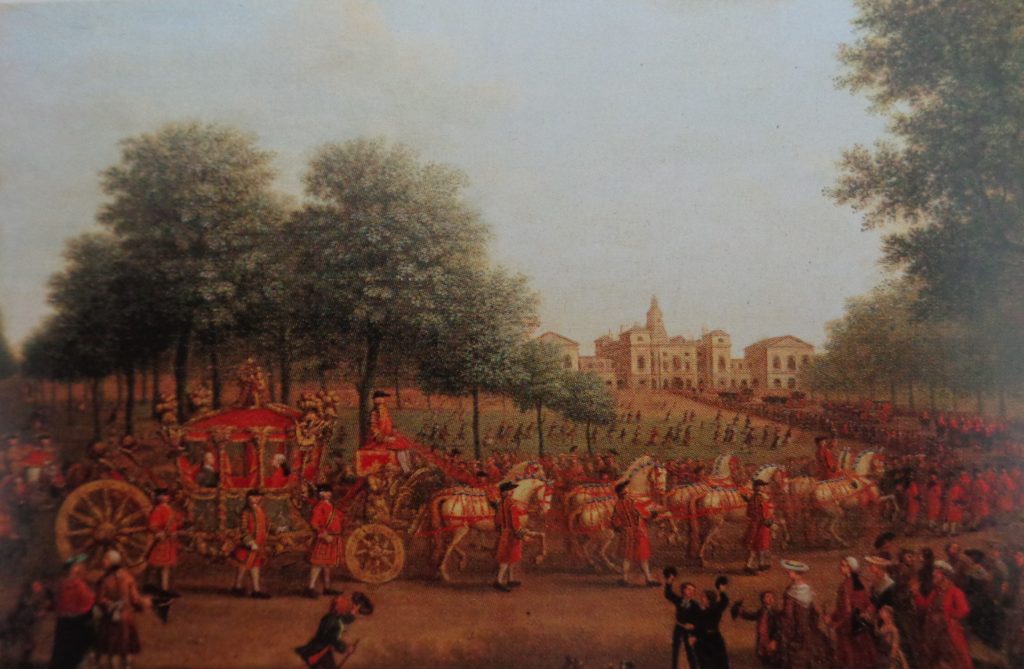 George III in procession to the Opening of the Houses of Parliament, attributed to John Wootton

The carriage  is exhibited in a long hall, and is so big that moving outdoors into the Mews courtyard involves dismantling doors and windows. It is just part of a really interesting tour of the Royal Mews. You can see the horses, the tack room, and the stables in the building housing the horses and designed by John Nash.  Well worth a visit, and the exhibition is open through the autumn. There are particular displays linked to the Buckingham Palace Family Festival which opens tomorrow, Saturday 5th August. Details are at www.royalcollection.org.uk 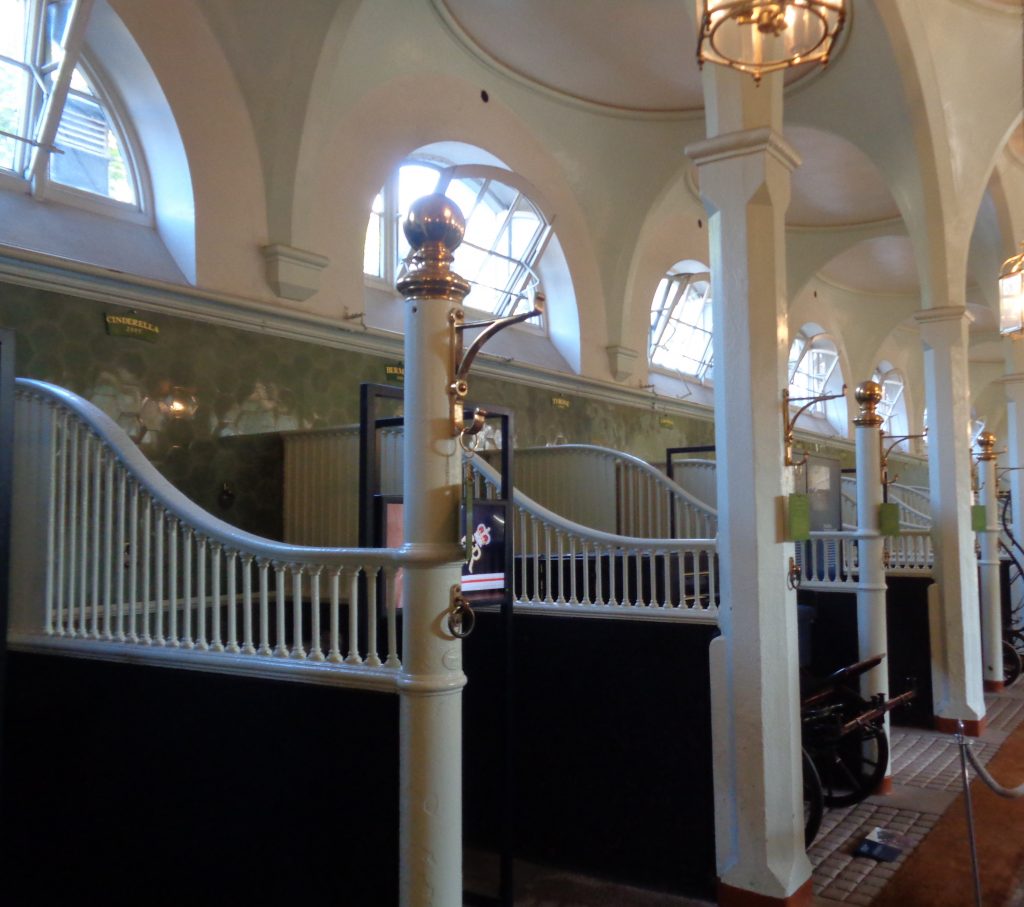 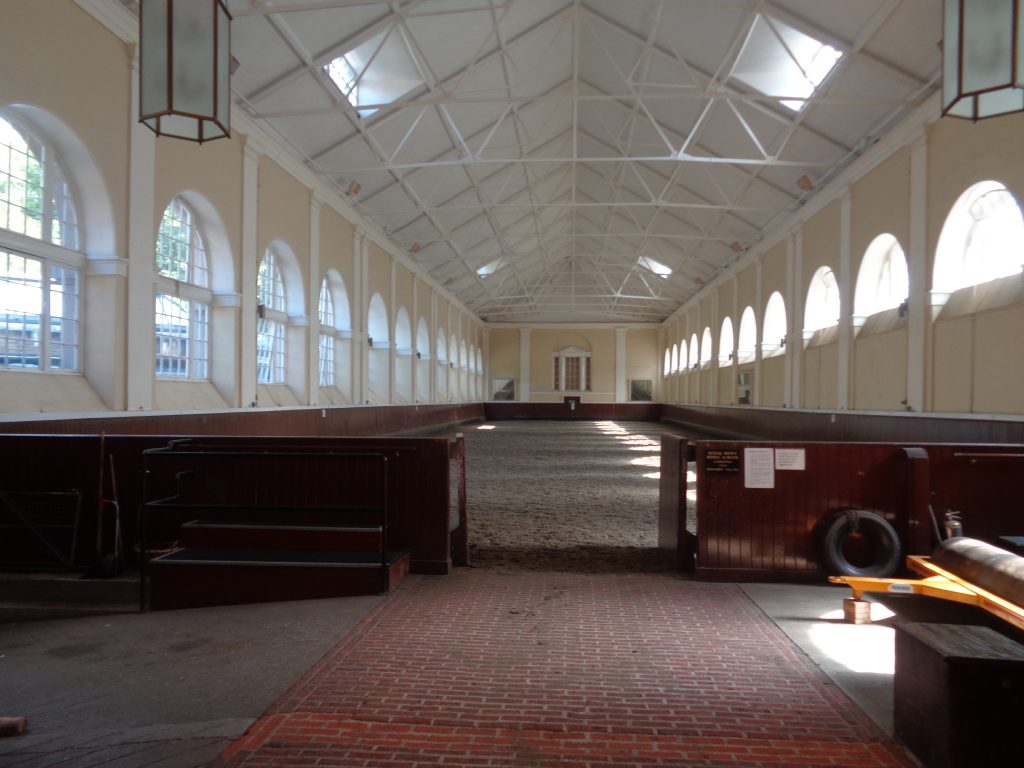 4 Responses to “The Gold State Coach – an interesting reminder of the coronation of Elizabeth II, and of playing with a tin-plate replica.”