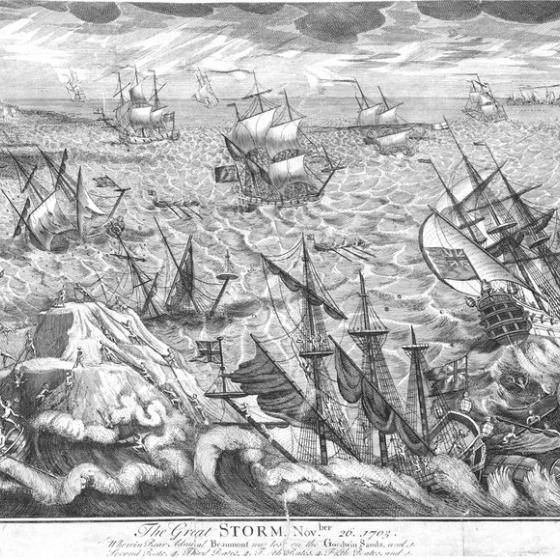 Today I am delighted to offer a guest post to freelance writer Lucy Lawrence. She has many years experience across a variety of sectors, having made the move to freelancing from a stressful corporate job – and loves the work-life balance it offers her. She gamely accepted my challenge to let me have an article about the Great Storm of 1703 – because she has a particular interest in modern technology and how it can help the modern world keep itself informed about the sort of extreme weather conditions which caused such devastating damage back in 1703. Back then, Queen Anne described the storm as “a Calamity so Dreadful and Astonishing, that the like hath not been Seen or Felt, in the Memory of any Person Living in this Our Kingdom.” If only back then they had the benefit of Weather Station Advisor!

Over to you, Lucy: 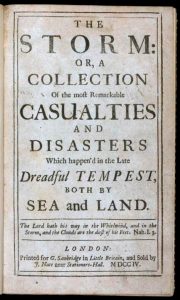 The front page of Defoe’s book The Storm

Of the Great Storm of 1703 Daniel Defoe wrote: “No pen could describe it, nor tongue express it, nor thought conceive it unless by one in the extremity of it”. Indeed it is one of the worst storms recorded in British History, and the 1700s was no stranger to terrifying storms. Defoe’s book “The Storm” has been a valuable historical account of the disaster, helping us to understand what the storm was really like for those that had lived through it.

EXTREME WEATHER AND WIND
For almost two weeks before the story took hold, Britain was battered by strong winds, but from 26th November to 7th December, this had developed into an extra-tropical cyclone that caused incredible damage and loss of life. It was documented that there were 4,000 trees blown down in the New Forest alone. In London, it was reported that 2,000 chimney stacks collapsed – the knock-on effect would have been huge, considering that all homes were heated by fire, and it was the start of winter.

The Somerset Levels, particularly in the area down towards Bridgwater and Yeovil, suffered from catastrophic flooding – hundreds of people died. There were also thousands of cattle, sheep and other livestock that were killed in the floods. Most incredible of all was the destruction of 400 windmills in the area. There were accounts of the sails going round with such speed and force that they burst into flames. 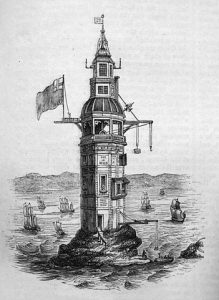 Off the coast of Plymouth the first Eddystone Lighthouse, constructed of wood to the designs of Henry Winstanley, was destroyed and Winstanley himself was among six people drowned. Meanwhile on the Goodwin Sands the destruction of ships seeking shelter was catastrophic, with ship after ship being sunk. Towns such as Portsmouth, on the South Coast, were described by Defoe as looking  “as if the enemy had sackt them and were most miserably torn to pieces.”

The Royal Navy took a terrible battering, losing thirteen ships including its entire Channel Squadron. The ships HMS Northumberland, HMS Restoration, and HMS Mary amongst others were destroyed. There were also 30 merchant ships lost in the storm, together with their crew. It is estimated that the storm resulted in the loss of between 8,000 and 15,000 lives.

HOW COULD TECHNOLOGY HAVE HELPED?

In 1703 there was no warning system to tell others of the dramatic fall in barometric pressure that happened before the storm – a sure indicator that it was unwise to set sail. In a disaster situation, the key to saving lives and trying to prevent as much damage as possible is communication. Emergency radio and weather radio is invaluable around the world to spread the news about incoming bad weather. These types of radio work without the use of the internet, or a television signal. In terms of the losses at sea, this would have been a game changer.

LOOKING TO THE FUTURE
Following the storm, the public and government reaction was very different to how it would have been today. It was generally considered that the storm was an act of God who was “crying at the sins of a nation.” As a result of this, the 19th January 1704 was declared by the government to be a day of fasting to atone for these sins. In Daniel Defoe’s book, he said that the sovereign fleet had been destroyed as a punishment for their unsuccessful performance during the War of Spanish Succession. Would this kind of comments be made today?

The Great Storm of 1703 was an enormous tragedy, with great loss of life and livelihood. However, it wasn’t for another 150 years that weather forecasting emerged as a science.

Thanks Lucy – and if anyone is interested in finding out more about the work of NOAA (the National Oceanic Atmospheric Administration) or the Weather Station Advisor which aims to help weather enthusiasts choose not only the best but the most suitable weather instruments for their particular needs, do follow the link to their site here. After all, as Lucy says, according to Time Magazine 2017 was the worst hurricane season ever and 2018 is unlikely to be any better. For my part I have just returned from seeing the devastation caused by Hurricane Irma in the British Virgin Islands. It  really was a reminder of the terrifying power of Mother Nature – and of how lucky we are that nowadays we get an effective ‘early warning’ of the sort of storms which caused so much damage 300 years ago.

Road Town, Tortola – next to the Yacht Marina built by my brother 40 years ago….

Life’s a beach …. Cane Garden Bay, BVI, has re-opened, but it is still recovering.