The groaning dinner table and the elaborate epergne at its centre. 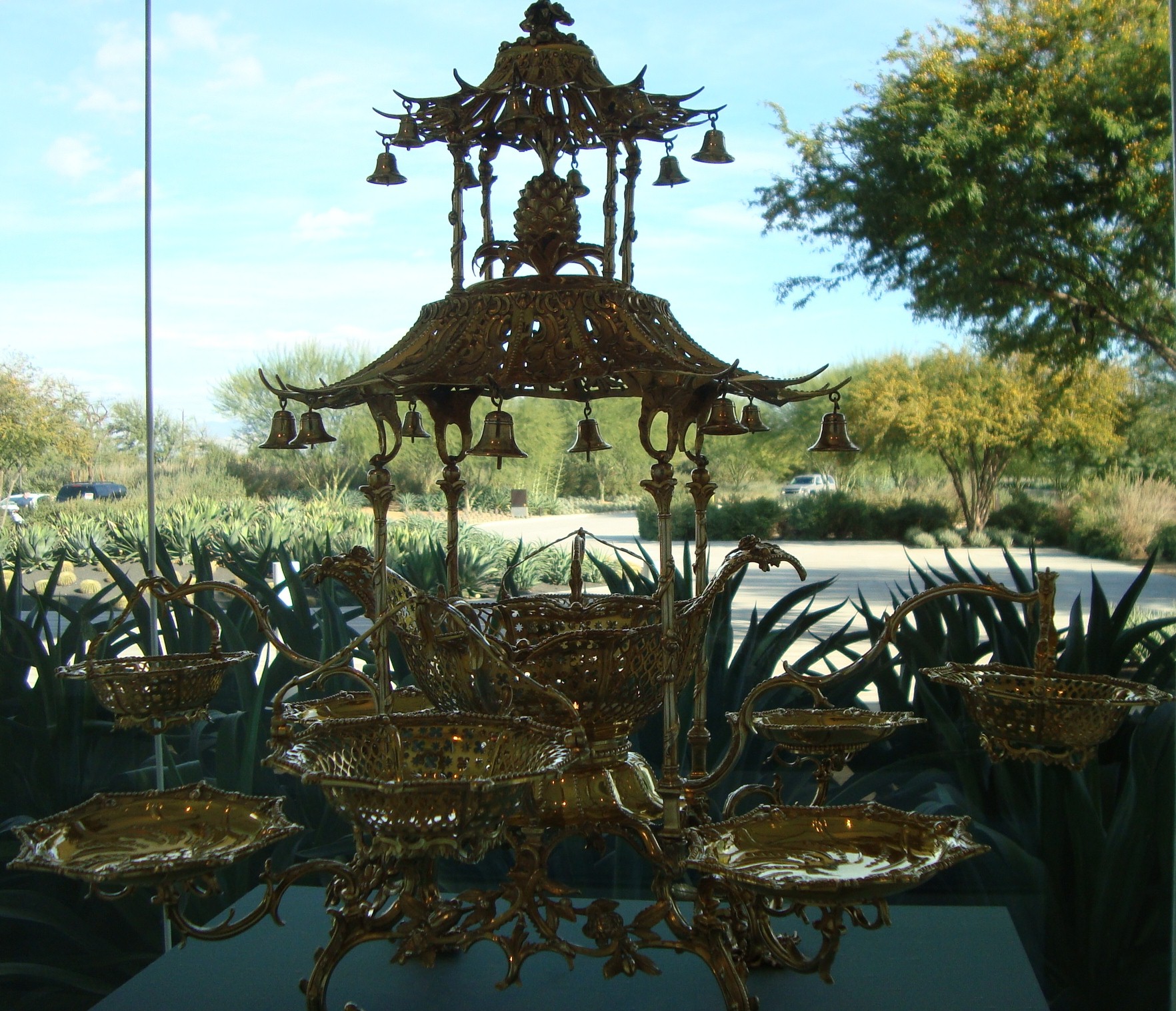 On holiday in the States a couple of months ago I visited the Annenberg Estate at Rancho Mirage, California. The place is a pretty impressive monument to what wealth can buy, most of it involving excess in one form or another. But I was taken by the sheer extravagance of an item from an earlier age, tucked away in a corner. It is shown here – sorry it is a lousy photograph but I could only take it against a background of agarve leaves… a silver gilt epergne by the English silversmith Thomas Pitts 1 (apparently his son bore the same name and he was therefore TP2…).

The epergne is interesting because of its role in the changing face of the dinner table throughout the 18th and 19th Centuries. In the early years of the 18th century the English had adopted the French fashion of having a surtout, holding casters and containers for condiments, and this would be exchanged for a fruitier when fruits were brought to the table towards the end of the meal. Both items were designed to take as little space as possible on the table and therefore made use of tiers of dispensers. Eating had traditionally been a communal activity – no-one was “plated up” one course at a time, and instead the whole groaning table would have been laid out with all the courses at the outset. A “remove” would then lead to a completely new set of dishes.

The tiered surtout in the centre became more and more elaborate. It developed into the epergne (originally anglicized as “aparn”) so that by the 1750’s these were extremely popular and gave rich owners the chance to show off their wealth and taste for opulence.

The word “epergne” apparently derives from the French “epaigner,” meaning thrifty or economical. At first the item was called a Save All because it saved the servant from serving each guest, since all the diner had to do was lean towards the centrepiece and help him or her self to condiments, pickles, fruits, nuts, sweetmeats, and other small items held in the bowls at the end of each radiating arm. The central bowl would have held exotic fruits of rare flowers. The “economy” was from the fact that it was space saving, and, as well as saving the servants from serving every single item, it also saved wastage – unused items were simply left in the centrepiece for use on another occasion.

And the foremost silversmith designing these elaborate edifices was Thomas Pitts. He was born in the Parish of St. Mary Whitechapel and was apprenticed to Charles Hatfield on December 6, 1737. In February 1742 his training was transferred to David Willaume II, son of a prominent French immigrant silversmith. He qualified and became a freeman of the City of London in 1744 but does not appear to have registered his first mark as an independent worker until 1758. He really got going with his epergnes in the 1760’s and 1770’s 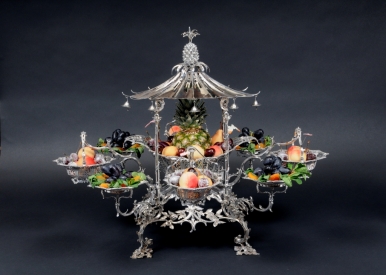 The Leeds Art Fund site here  in describing this epergne at Temple Newsam House bedecked with fruit states “The centrepiece is in the form of a Chinese pagoda or garden pavilion, complete with upturned eaves, hanging bells, pierced baskets and dishes. They would have contained fruits and delicacies for the dessert course at dinner and the table might have had additional ornaments such as porcelain figures and sugared sculptures” 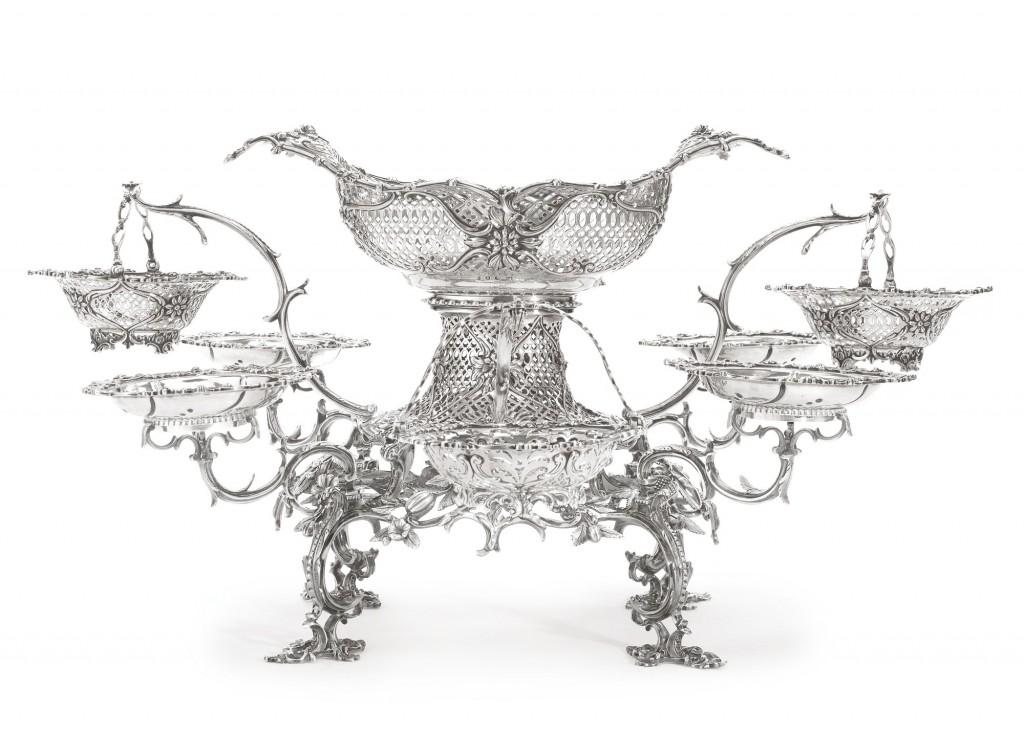 Sothebys describes the George III silver nine basket epergne shown above as being by Thomas Pitts, London 1762 and having “a frame on four beaded scroll supports linked by openwork aprons of fruit and flowering foliage, rising to the neck pierced with panels of trellis and supporting a matching large oval basket and eight scroll branches topped by four circular hanging baskets and four circular dishes.” It apparently sold for $37500 in October 2012.

Another Thomas Pitts epergne, in the neo-classical style, is this one: 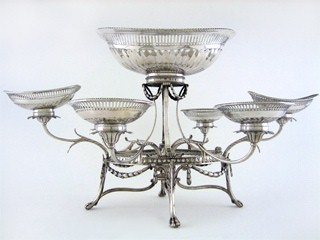 The popularity of the epergne started to wane by the time Queen Victoria came to the throne. Fashions changed and in came the “new” style of serving, service a la russe, with each course being brought in separately. This left more room on the table for the display of flowers and so on. But for sheer extravagance the Annenberg epergne takes some beating – imagine the effect this theatrical masterpiece would have had on diners, with the dancing candle light bouncing off the fretwork gilding, casting shadows as it glittered in the golden light, and no doubt tinkling its bells whenever a guest removed an item. Magnificently O.T.T.! 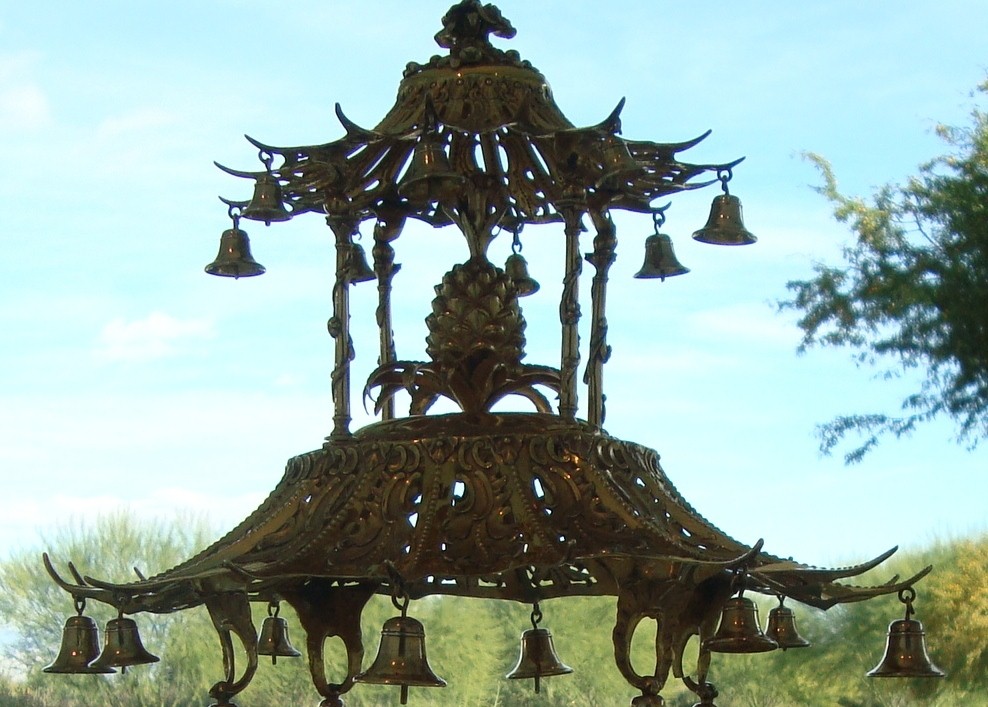 3 thoughts on “The groaning dinner table and the elaborate epergne at its centre.”