The joys of smoking a churchwarden pipe, courtesy of Bunbury and Rowlandson 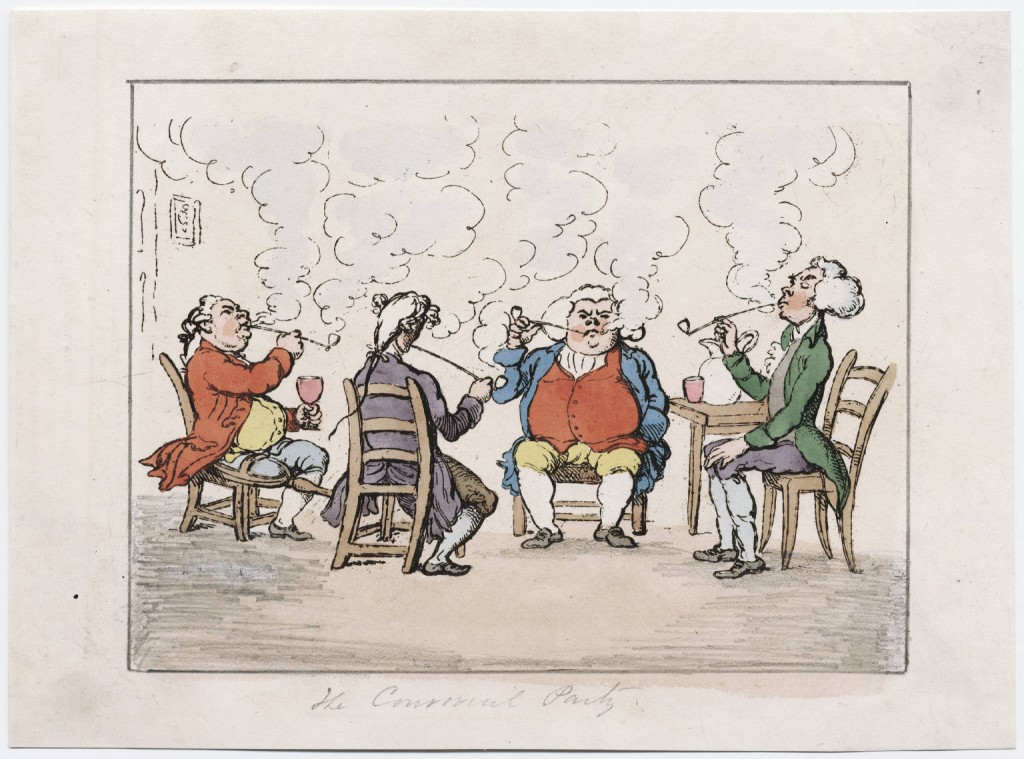 A rather nice gentle caricature, originally by Henry William Bunbury, but engraved by Thomas Rowlandson, showing a group of gentlemen gathered to enjoy a smoke. It was only actually published in 1835, whereas Bunbury had died in 1811, and Rowlandson in 1827. The official title is ‘The Smoking Club’ – and the pencil comment underneath refers to ‘The Commercial Party’.

The print appears on the Lewis Walpole Library site and is typical of Bunbury’s kindly observation. The four gentlemen, wreathed in smoke, are smoking clay ‘churchwarden’ pipes, typically with stems up to twenty inches long. The pipes apparently became very popular in the second half of the eighteenth century and had originated in the Ottoman Empire, and were often associated with the Hungarian Hussars – hence their alternative name of ‘Hussar pipe’. In Germany it was known as “Lesepfeife” or “reading pipe,”  – presumably because the long stem took the smoke away from the smoker, enabling the user to read a book without getting smoke in his eyes. The other advantage of the long stem is that it makes for a much cooler smoke.

Why churchwarden? Probably because the church-wardens were responsible for keeping an eye on their church at night, and smoking such a long stemmed pipe left their line of sight clear.

The stems were incredibly fragile and kept breaking, as shown by the pile of snapped-off stems  at the feet of the smoker shown in this detail from a print by Hogarth. I see that the film The Hobbit has helped  re-popularise the pipe, and the web is full of ‘Gandalf pipes’ most of them made from wood, carved and polished, but some of them are hand-made from white clay. So if you really crave authenticity, have a look at  this site on e-Bay – and make sure that you have your £46 ready!

My ancestor enjoyed a good smoke, and recorded the occasion in his diary, as here: