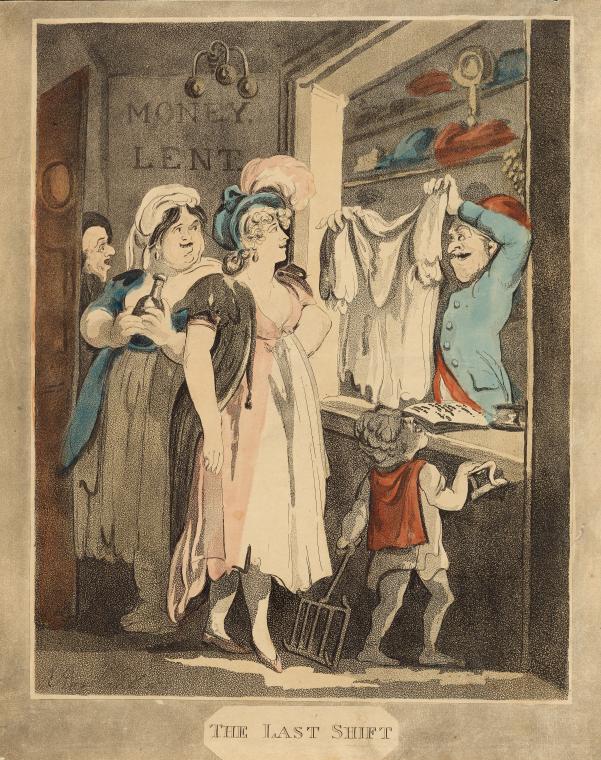 I came across this Rowlandson recently, entitled The Last Shift, showing a woman in a pawn shop, presumably about to pawn her under-garment, while the pawnbroker holds the garment up to assess its condition. It dates from 1809 and appears courtesy of the British Museum.

There are some interesting details – the boy who seems to have been “collecting” old irons and a fire-stand; he can barely see over the counter but presumably uses the shop as a place where he can gain a few pennies. The shelves suggest that clothing is mostly taken in by the pawn-broker – certainly no jewellery, ornaments or fancy goods are on display. The older woman clutches a bottle – you can be fairly sure she will know what to spend an extra few pence on – while a slack-jawed old man inside the doorway looks shocked at the mere display of the tattered shift. 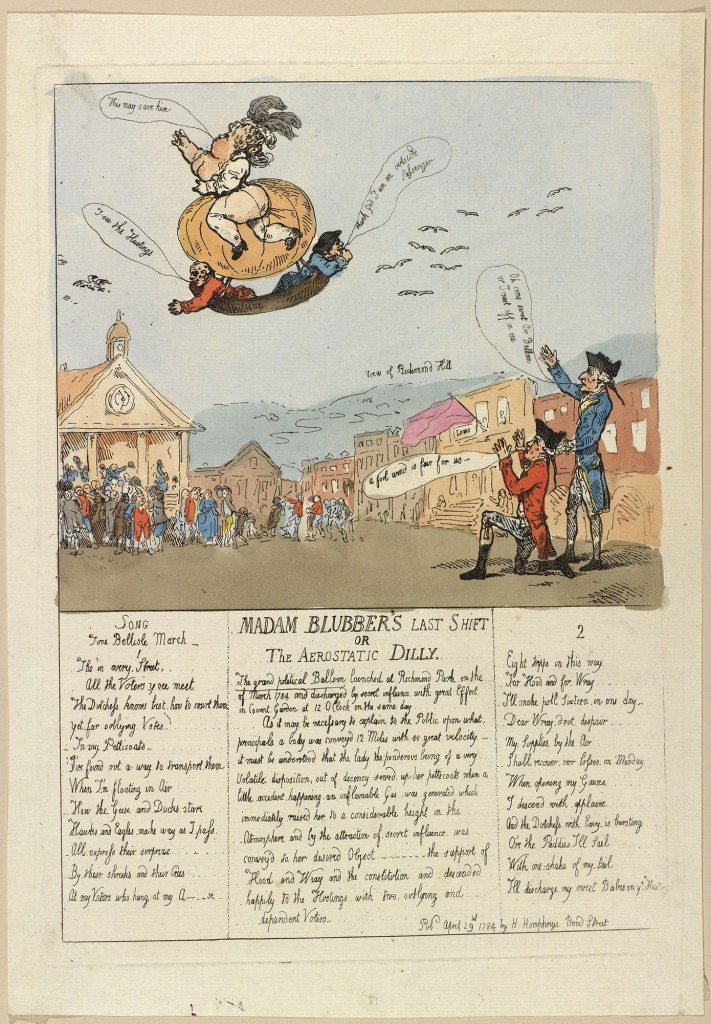 In 1784 (the year when balloon mania swept the country) Rowlandson had drawn another “last shift” or, to give it its full title: “Madame Blubber’s Last Shift, or the ærostatic Dilly”. It appears courtesy of the Royal Collection and their site describes it as:

“A hand-coloured print depicting a scene in Covent Garden with the Duchess of Buckinghamshire floating up into the sky after a ‘little accident’ has inflated her skirts. Suspended beneath her are two voters. On the ground, Sir Cecil Wray, who is on bended knee and Admiral Hood, both look up and comment in support of the Duchess. On the left stands a crowd listening to an orator during the hustings for the Westminster Election at Covent Garden”.

The verse includes the couplet:

“Hawks and eagles make way as I pass.

All express their surprise

by their shrieks and their cries

At my voters  who hang from my A–se”

I am not sure what the decidedly overweight, and presumably flatulent, Duchess had done to deserve being  over-inflated in this way – presumably a reflection on her ego. But it is a nice indication of just how coarse Rowlandson could be if he set his mind to it. 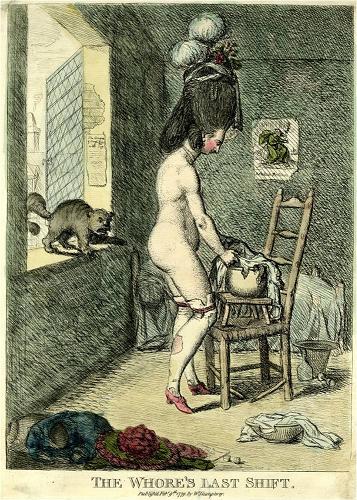 And to end with the rather better-known ‘last shift’ – “The Whore’s Last Shift” by James Gillray. It shows the whore in her garret, naked, washing her shift in the chamberpot . The pun on ‘shift’ is that she has just serviced her last customer for the night. Her stockings are torn – the place is seedy, and the elaborately coiffed head-dress fools nobody. The cat, as usual with Gillray, signifies female lust.

As the British Museum site adds: “there is a broken basin on the floor; her hat and outer-garments also lie on the floor. Beside them are two pill-boxes and a paper inscribed “Leakes famous Pills”. Her hair is elaborately dressed in a pyramid, decorated with feathers, flowers, and ribbons. The low bed has tattered coverings. A casement window (left) is open, showing the roof of a neighbouring house; on the sill a cat miaows. A broadside ballad is pinned to the window recess: “The comforts of Single Life. An Old Song.”  On the wall is a torn print, “Ariadne Forsaken.” The plaster has peeled off the wall in patches, showing bricks.”

It dates from 1779. Not the most glamorous picture of femininity to end with ….!

2 Responses to “The last shift…”