Richard was of course writing this in the absence of any knowledge as to how the abolition movement would end – Parliament was not to approve abolition until six years after Richard’s death. Richard would have heard at first-hand about the plight of slaves because his first wife’s uncle (William Seward) raised money and went to America with George Whitfield (one of the founders of the Methodist movement) in order to buy land so that freed and escaped slaves could establish farms and be self-sufficient. 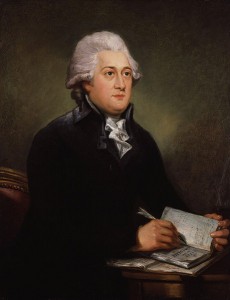 Throughout the last half of the eighteenth century there had been a growing ground-swell of opinion – Parliament did not lead the change, but reacted to the continual pressure from people like Thomas Clarkson, who was the real power-house for abolition. Thomas, along with two other Anglicans were founder members of the Society for Effecting the Abolition of the Slave Trade (´SEAST´). All the nine remaining founder members were Quakers, reflecting their driving force behind abolition. But Quakers were banned from entering Parliament and they therefore sought the support of William Wilberforce, MP for Kingston upon Hull. But if Wilberforce was the mouthpiece of the movement Clarkson was the engine, devoting years of his life to travelling tens of thousands of miles around the country obtaining evidence, canvassing, educating, and basically giving Wilberforce the bullets to fire in Parliament.

It had started for Clarkson when he was at Cambridge University. The 25 year old had entered an essay-writing competition (in Latin) on the question “Is it lawful to enslave the unconsenting?” The research for the essay was to change his life. It dawned on him that someone had to do something about the appalling degrading trade, and that the ´someone´ was going to be him.

The next year he translated his essay into English and it became widely circulated and acclaimed. He helped found SEAST and tirelessly toured the country on horseback organizing petitions and rallies. He pestered and cajoled William Wilberforce into promoting the abolitionist cause in Parliament. He even managed to get 11,000 signatures opposing slavery from Manchester – roughly a fifth of the entire population and this in a city built on commerce. How? By pointing out that the business of shipping slaves was not just morally repugnant but, in business terms, hopelessly wasteful. It is estimated than 20% of all slaves died in transit – of highly contagious diseases like dysentery. But the same statistic applied to the crews who manned the slave ships, since disease affected everyone, and that sort of loss was clearly “bad business practice”.

Clarkson collected and distributed stories of the hideous squalor on board the slave ships. He showed people his gruesome collection of torture implements (leg irons, thumb screws etc.) used to control the slaves. Above all he demonstrated that the slaves were human beings, and in Josiah Wedgwood´s pottery medallion bearing the inscription “Am I not a man and a brother?” he struck a chord which resonated throughout the kingdom. The medallion became a fashion item and as Clarkson himself wrote “ladies wore them in bracelets, and others had them fitted up in an ornamental manner as pins for their hair. At length the taste for wearing them became general, and thus fashion, which usually confines itself to worthless things, was seen for once in the honourable office of promoting the cause of justice, humanity and freedom.” 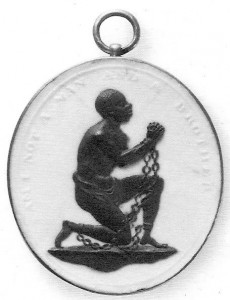 Picture courtesy of the V & A

Undeterred by an earlier failure, Wilberforce tried to push his anti-slavery Bill through Parliament in 1791 – but was crushingly defeated. Soon, all attention was devoted to the war with France. The anti-slavery movement was obliged to ´hibernate´ until war was nearly over before re-doubling its efforts. In 1804 Clarkson again hit the road, criss-crossing the countryside whipping up support. Finally, the Slave Trade Act became law in 1807. The Act made it illegal to engage in the slave trade throughout the British colonies, but trafficking between the Caribbean islands continued, regardless, until 1811.

Two centuries on from this anniversary Wilberforce continues to be remembered and gets all the credit. His is a household name; Clarkson the forgotten hero. Clarkson died on 26th September 1846. Wilberforce is buried in Westminster Abbey near his political chum William Pitt; Clarkson is interred St Mary’s Church in the small Suffolk village of Playford.

Happy birthday, Thomas; you were one of the great social reformers of the Age – any Age. And for that reason Clarkson will have his own chapter in the book I am writing at present, about the Georgian Greats who lived in the shadow of Fame. Others – Wilberforce – basked in the full force of Fame’s spot-light, and Clarkson languished un-noticed by his side. Hopefully the book will be published by Pen & Sword next year. There’s a small matter of writing it first….

3 Responses to “Remembering the man who made abolition possible: Thomas Clarkson, born 28 March 1760”