In my last post I gave details of the smaller pocket-sized cases for handy utensils used in the Georgian era. Today is for larger, grander, containers!

On its informative and fascinating site The Georgian Index  has a picture of an eighteenth century travelling box or nécessaire. For some reason I cannot insert a direct link to it , but it is  at http://www.georgianindex.net/travel/necessarie.html

It is described as containing glass bottles, tweezers, a pearl-handled sponge, a spoon, bodkin and scissors. And of course it is topped by a travel clock!

As I have mentioned in The Journal of a Georgian Gentleman my ancestor Richard Hall was a great fan of the jeweller and entrepreneur James Cox. He was his exact contemporary (they were born a couple of years apart and died within a few months of each other). Richard frequently  records that he ‘took tea’ with James and as a regular visitor to  his museum at Spring Gardens there is every likelihood that he would have seen this piece. It is described as being  a nécessaire incorporating “an automatom watch, dating from the 1770’s  with a moss agate case mounted in gold and set with diamonds, rubies, and emeralds; silver; and mirror glass; dial: white enamel, with frame pavé set with paste jewels. It is held at the Metroplitan Museum of Art.

The Royal Collection also holds an example of a James Cox nécessaire, with the explanation: When the lid is opened, a watch and automaton are revealed. The watch face is surrounded by an outer circle set with ten jewelled roundels; these spin individually around the watch face as the outer circle rotates. This appears to have been a favoured device and is found on other watches and clocks by Cox, including examples sent to the Emperor of China. A painted chinoiserie scene hides the back of the mechanism. Below this a second compartment is fitted with various cosmetic bottles and implements. Agate, gold, silver, coloured paste, pearls, glass, gouache are all used in this piece. It became part of the Royal Collection when Queen Mary gave it to her husband (George V) on Christmas Day 1925. 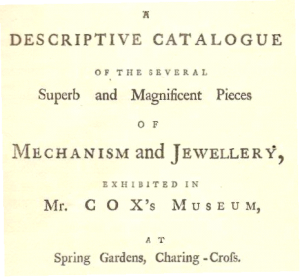 Another example found in the Metropolitan Museum of Art in New York.The description is that it is made of gold and agate by French watchmaker Joseph Martineau senior, who was active in London between 1744 and 1770.

But the heyday of the necessaire was surely in the Victorian era. The boxes developed into beautifully engineered cases which held a multitude of fine things, which were intended to be used rather than merely looked at. Lift the lid on this splendid coromandel and brass case and the sides automatically open out and the front drops down to reveal a positive cornucopia of goodies – cut glass scent bottles, brushes, mirrors, sewing implements and indeed everything a lady could possibly want on her journey right down to a screw-in hook (in case your host did not provide one for your silk peignoir on the back of the door 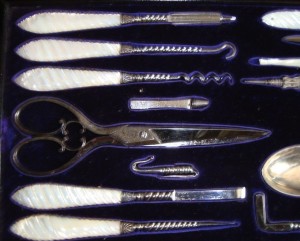 The containers reveal such delights as a swans down powder puff, while the mirrors include concave and convex  ones as well as plain. All are crested and the cabinet even has its own case – it comes in a leather box with its owner’s initials. Almost certainly it was made by William Neal in London shortly after 1880. 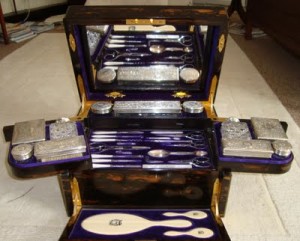 Rather more about this beautiful piece appears if you click on the link to the ever-fascinating Two Nerdy History Girls site. 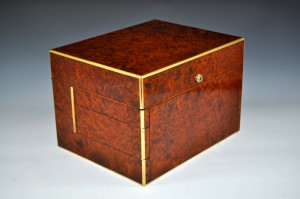 These travel case developed throughout the Nineteenth Century until we get to the splendid example, with a Titanic connection, which appears on the Hampton Antiques website at http://www.hamptonantiques.co.uk/fisher-coromandel-silver-vanity-box-1.html. Why the Titanic?  Because this outstanding box was given by Joseph Bruce Ismay  as a present to his wife Florence Schieffelin. It’s possible that the box was commissioned as a wedding anniversary present. Ismay was a  director of the White Star Line of steamships (famous for building the Titanic) and the box was commissioned from the New York department store of B. Altman & Co.

Joseph Bruce Ismay, known as Bruce, was the highest ranking official from the White Star Line to survive the tragedy which occurred precisely a hundred years ago. The box is made from thuya wood and instead of the more usual  brass protective edges it is bordered with silver gilt. More information on this superb piece can be obtained from Hampton Antiques. 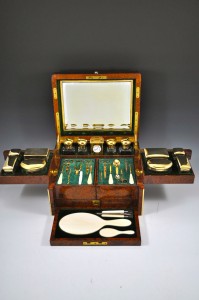 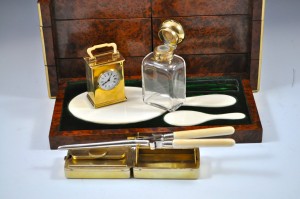