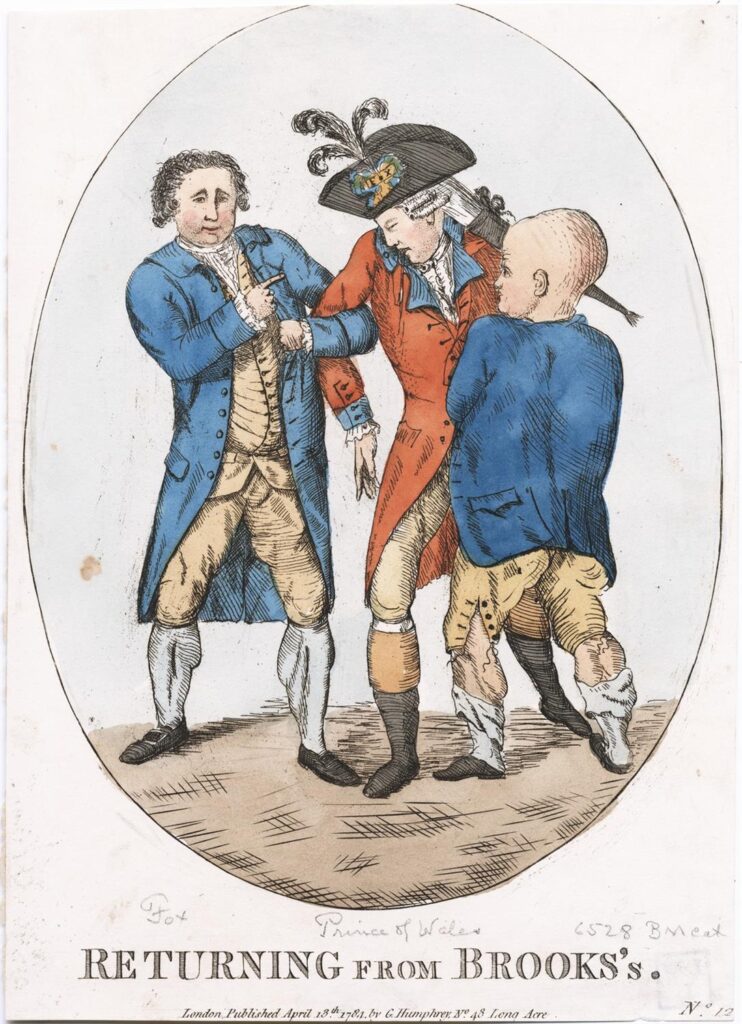 A nice print I hadn’t come across before, on the Lewis Walpole Library site. It came out in 1784 and shows the Prince of Wales returning from a heavy session at Brooks’s Club. He is wearing a Prince of Wales plume of feathers in his hat and sports a ‘Fox’ favour. On his right, Charles James Fox offers his arm and raises a finger as if in admonishment. Apparently the figure on the left of the Prince, back half turned to the viewer, is Sam House, but who he was and what his connection was with Brooks’s Club is unclear.

Brooks’s Club is still going strong and their website has this to say about its origins:

In January 1762 a private society was established at 50 Pall Mall by Messrs. Boothby and James in response to having been blackballed for membership of White’s. This society then split to form the predecessors of both Brooks’s and Boodle’s. The Club that was to become Brooks’s was founded in March 1764 by twenty-seven prominent Whig nobles including the Duke of Portland, the Duke of Roxburghe, Lord Crewe and Lord Strathmore. Charles James Fox was elected as a member the following year at the age of sixteen. The Club premises at 49 Pall Mall was a former tavern owned by William Almack as was the neighbouring 50 Pall Mall where the society had previously met and so the Club become simply known as Almack’s. These fashionable young men, known as Macaronis, would frequent the premises for the purposes of wining, dining and gambling.

In September 1777 William Brooks, a wine merchant and money lender who acted as Master, or manager, for Almack’s, commissioned Henry Holland to design and construct a purpose built clubhouse at a site on neighbouring St James’s Street. Paid for at Brooks’s own expense, the building was completed in October 1778 and all existing members of Almack’s were invited to join. Brooks’s gamble paid off as all existing members swiftly moved into the new building and the Club then took on Brooks’s name as its own. Brooks himself however would not live long to enjoy this success, dying in poverty in 1782.”

So, in this picture, Fox would have been around 35 and the Prince a mere lad of 22. By that time he had already been embroiled in affairs with Mary Robinson and The Armistead, and had met and fallen for the charms of Maria Fitzherbert, with whom he would go through an invalid form of marriage ceremony the following year. More about these splendid ladies in my next book, due out next year, about courtesans and high fashion. Meanwhile they all get a mention in my recent tome Sex and Sexuality in Georgian Britain

The hand-coloured etching was by George Humphrey of No. 48 Long Acre – the elder brother of Hannah Humphrey who owned the nearby print shop where she lived with the caricaturist James Gillray. George sold prints along with all manner of curiosities (shells, fossils etc) – including items bought by him from some of the crew who accompanied James Cook on his voyages of circumnavigation. Later, he operated out of premises at 4 Leicester Street, Leicester Square, and died in 1826. By then both of his print-selling siblings had predeceased him – William in 1810 and Hannah in 1818.

His other sister was  Elizabeth who married the leading international mineral dealer Adolarius Jacob Forster, running his London shop until her death in 1816. An interesting chap, was the splendidly-named Adolarius. He spent forty years flogging mineral samples across Europe, with shops in Paris and St Petersburg and with two London shops, one in Soho and the other in Covent Garden. The Humphrey-Forster link was obviously a close one – Adolarius married George’s sister, George married  the sister of Adolarius.