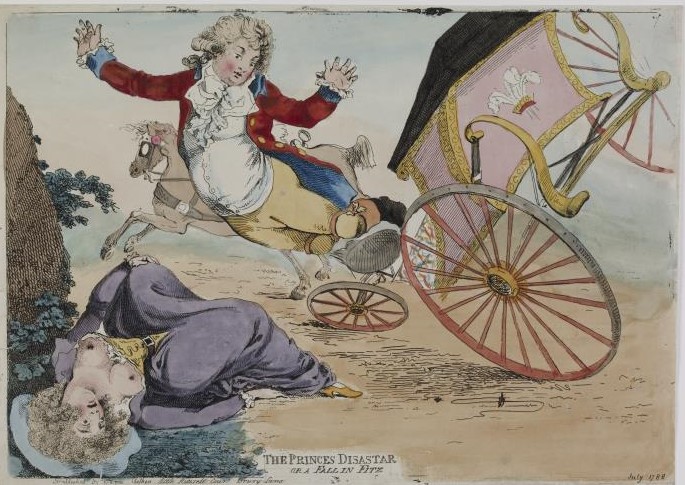 Here is a nice caricature showing the artist’s view of the scandalous behaviour of the Prince of Wales in cavorting with Maria Fitzherbert. Entitled ‘The Prince’s Disaster, or a Fall in Fitz’, it followed an incident on 1st July 1788 when the Prince went out for a drive in his phaeton, and the vehicle over-turned, throwing both occupants to the ground. Neither appears to have been seriously injured – because the Morning Post of 5th July  reported that the Prince had come to town the previous day and that ‘Mrs Fitzherbert is totally recovered from the effects of her accident.’ The upshot was this caricature, published by James Aitken – described as being of Little Russell Court Drury Lane. It appears on the British Museum site and they describe it in the following manner:

‘The Prince of Wales falls from an overturning phaeton or curricle. He is about to fall on the prostrate body of Mrs. Fitzherbert (left), who lies on her back, her breasts exposed, in an attitude intended to be indecorous. She lies under a steep bank or rock beside a country road. The horse rears behind the Prince.’

Poor Maria – she was always the subject of nudge-nudge, wink-wink caricatures. As for James Aitken, the publisher, he was responsible for around a hundred prints  between 1788 and 1801. His early prints were often engraved by James Gillray and Isaac Cruikshank, but he drifted down to ‘the lower end’ of the print market ie selling erotica and salacious material. He ended up in the dock charged with obscene libel – i.e. selling indecent material. He had apparently been part of a consortium of printers responsible for such masterpieces as Harris’s List of Covent Garden Ladies. He was sentenced to a year in prison with a fine of £200, so goodness knows what happened to his wife and six young children. Eventually Aitken was declared bankrupt (in early 1801) and in all probability died in extreme poverty some time towards the end of the Regency period. More about Aitken can be found on the ever-interesting Print Shop Window site here and there is an etching of ‘John Aitken/ Alias John the Painter’, showing Aitken in the dock at his trial, on the British Museum site.

To end with, a print entitled  ‘The Royal Toast – Fat Fair and Forty’ which appeared in March 1786. It shows Maria Fitzherbert dressed in her fashionable finery – and demonstrates just how uncomplimentary the satirists could be! 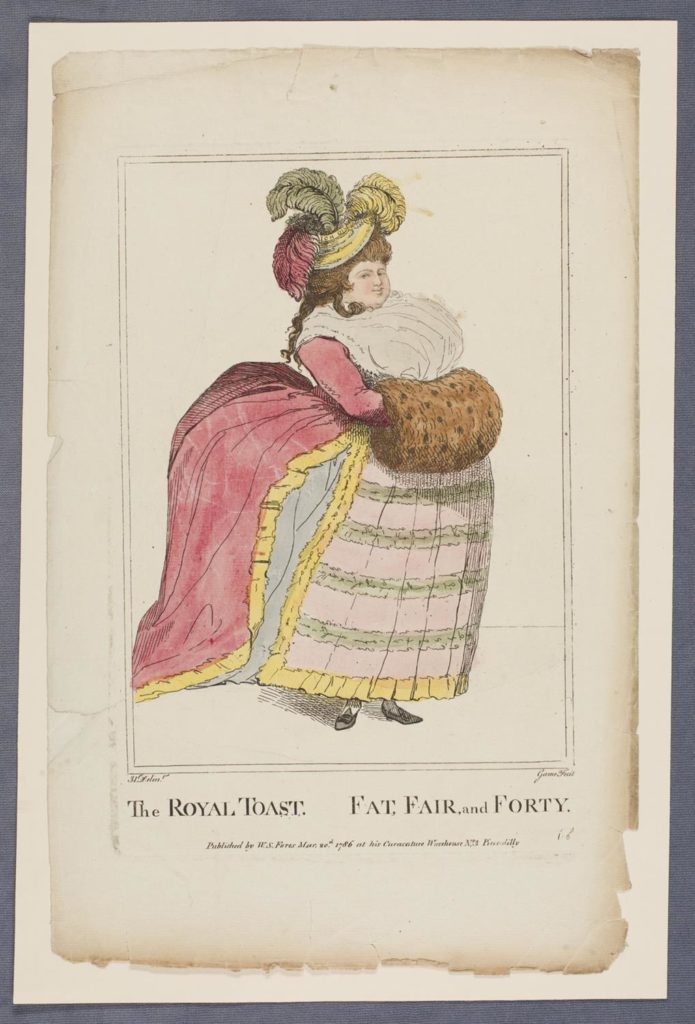 Shown courtesy of the Lewis Walpole Library at Yale University.

2 Responses to “The Prince of Wales flying through the air – and landing on his busty girlfriend. Nothing new there then…..”