It is interesting to see how the weight and girth of the heir to the throne fascinated onlookers in the last two decades of the eighteenth century. To start with, a silhouette from 1781 showing the outline of George, Prince of Wales, shown courtesy of the Lewis Walpole Library site at Yale University. So far so good. 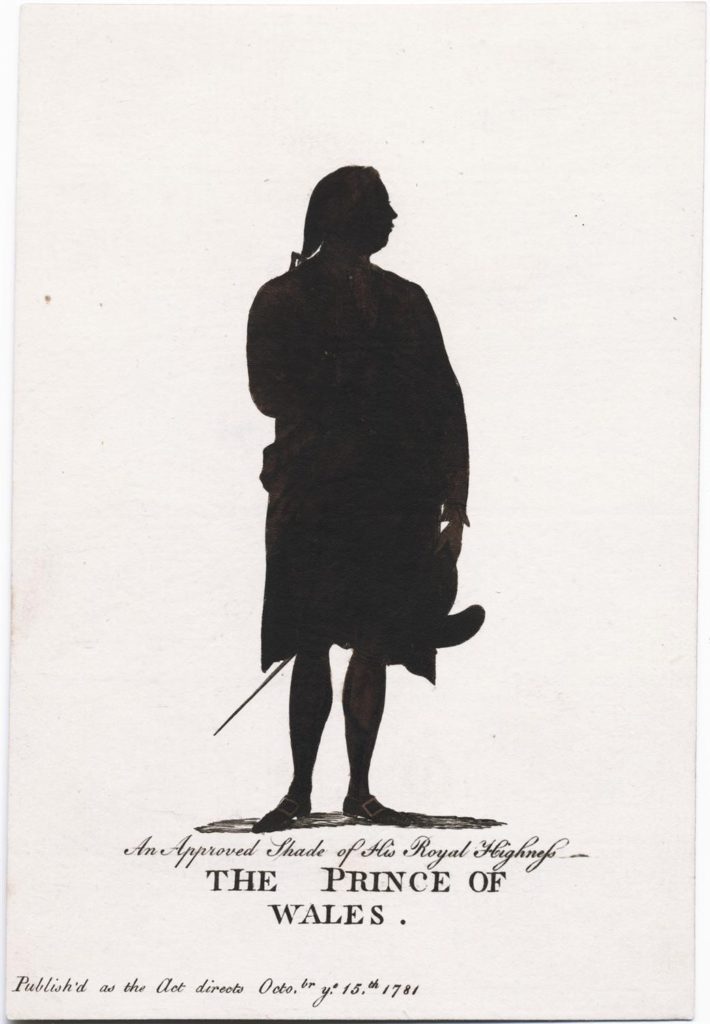 Shortly afterwards we have a sketch of the rear view of the Prince astride his horse. Not too bad… 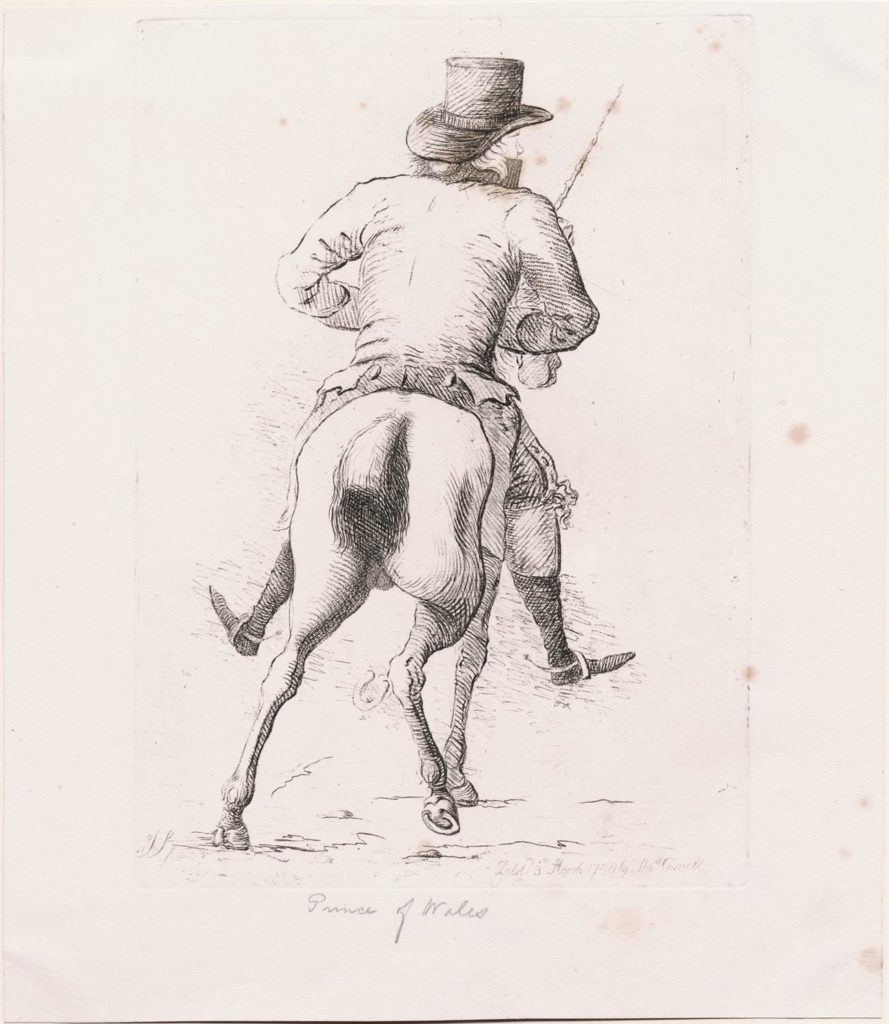 But we then move on to a rear view drawn by James Gillray, in 1800. 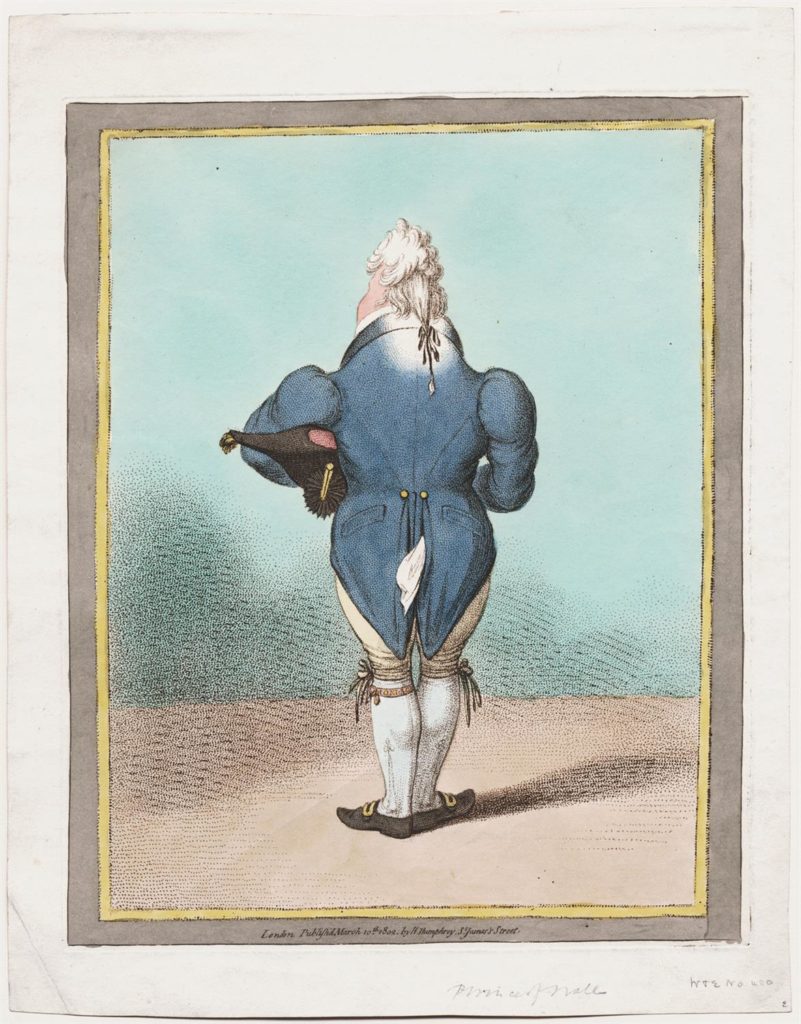 The Prince stands in back view, his head turned to the left. His heels are together. His powdered hair or wig has a cockatoo-like crest, worn with a very small queue, round which his coat is thickly frosted with powder. His neck, as indicated by his coat-collar, is grotesquely thick, his coat has the bulky sleeves associated with Jean de Bry, with pointed coat-tails. Under his left arm is a cocked hat. The word ‘Honi . . .’ appears on his garter.’

It is dated 1800 – twenty years before his father died and he was finally able to  claim the crown in his own right, as George IV. By then he was grossly overweight, with hugely swollen limbs, and suffering from a variety of complaints. Most particularly these ‘complaints’ included the fact that the public pointed  him out and poked fun at his figure if he set foot outdoors. Such was the loathing of the British public, who despised their hypocritical, venal, extravagant new ruler, that he became a virtual recluse, imbibing increasingly large quantities of laudanum.

George IV famously banned his wife from attending his own coronation in Westminster Abbey – he was haunted by the horrors of the very thought of her. This gave rise to the final bum-shot, with the King looking at his own reflection but seeing only the queen looking back at him. 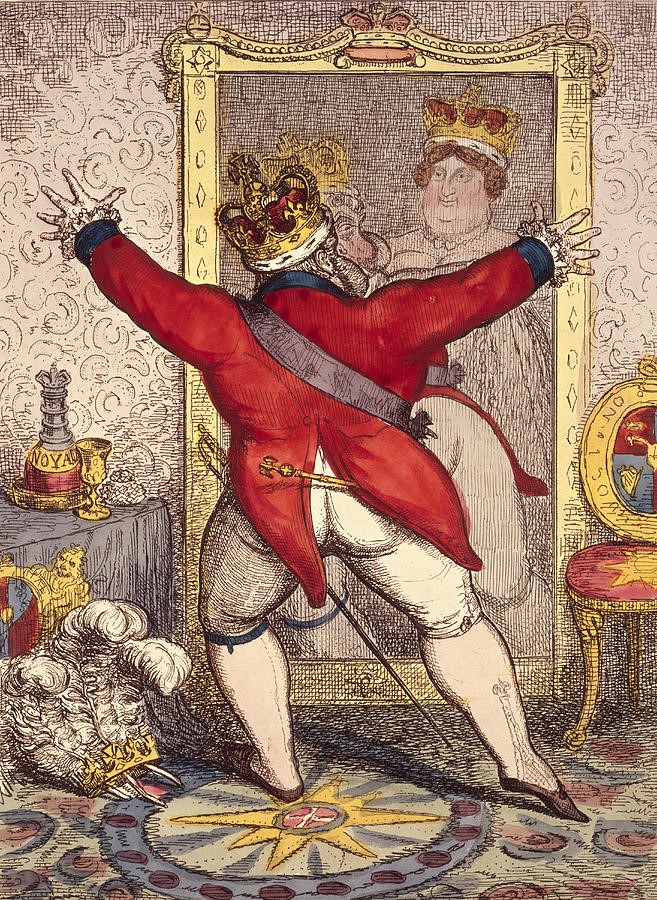 ‘Reflection: To be or not to be’ courtesy of the Trustees of the British Museum.

As the British Museum site says:

‘George IV, looking at himself in a pier-glass, starts back at the sight of his wife, crowned, looking over the shoulder of his own reflection, of which a cheek, whisker, and startled eye are visible. The crown, which he is trying on, is on his head; on the floor beside him lie his discarded coronet and feathers. He wears a sword, and a sceptre projects from his coat-pocket. The Queen is very stout, and seems taller than the King, looking down on him with a contemptuous half-smile. She wears a necklace centred by two hearts. On a table (left) is a decanter of ‘Noyau’, with a glass. Carpet, chair, and table-cloth are decorated with the Royal Arms or (Garter) stars. The mirror is surmounted by a crown.’
It appeared on 11 February 1820 and was drawn by Isaac Robert Cruikshank and published by SW Fores – and here he is shown as a right royal porker.

A hint of the size of the Prince was shown by his choice of wearing apparel on his visit to Scotland in 1822. Apparently his kilt was so short that he was forced to wear a pair of pink tights underneath his ensemble in order to preserve his modesty and to hide his massive thighs. The official portrait omitted the pink tights – but this caricature form the time shows the Prince with his somewhat meaty thighs. 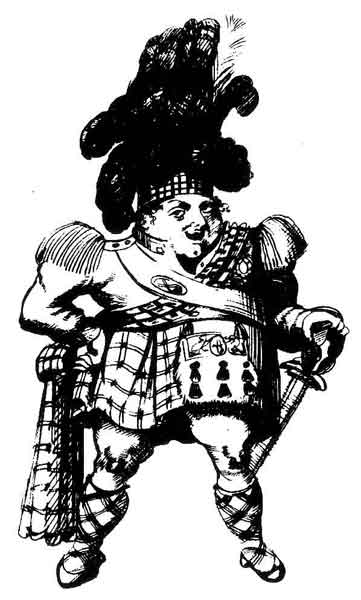 Not that the caricaturists were any nicer to Queen Caroline of Brunswick, his long suffering wife. To end with, a Gillray picture showing that whatever she was, she was no oil painting. Who says that our generation is the one which is pre-occupied with beauty? Poor Caroline was constantly ridiculed – largely because she was somewhat less than beautiful. OK, she was ridiculed for many other reasons as well, but in general if they couldn’t find anything nasty to say about what she was doing, caricaturists made do with describing what she was looking like… 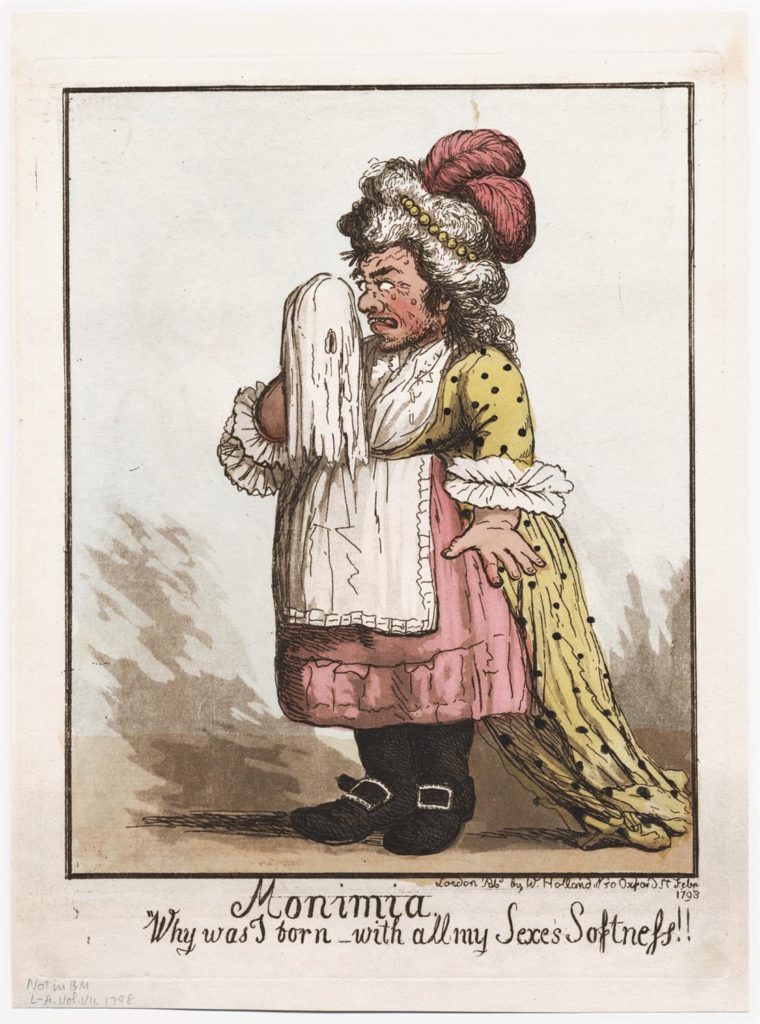 ‘Monimia – Why was I born, with all my Sexes softness!!’  by James Gillray, from 1798. The irony would not have been lost on the audience: here was a woman who was largely devoid of the softness normally associated with her sex; not only that, she was positively repulsive, ugly and definitely NOT one of the beautiful people.