I rather like the  way that caricaturists in the Georgian period liked to include their employer’s print shop in the background. Indeed there must have been an explosion of such shops in the last twenty years of the eighteenth century, to cope with all the series of caricatures, drolls and so on churned out by the latest breed of artists, satirists and moralisers.

Here are a few showing the print shop premises – either as central to the drawing, or by way of background, and unless otherwise stated they appear on the Lewis Walpole Library site:

First up, Robert Dighton’s “A Windy Day” showing hats and wigs flying in the face of a fearsome gale as the crowd jostles in front of an un-named emporium selling prints: 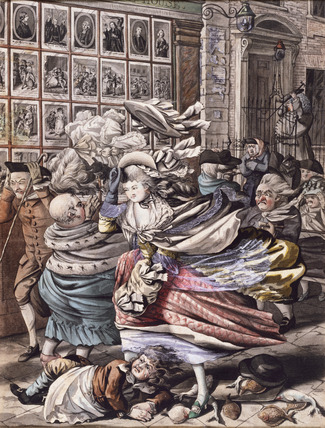 In a rather similar vein, a high wind outside No. 57 St. Pauls Church Yard, [1793]. While the girls in the centre struggle to remain modest, the female on the left reveals that she is not wearing underwear, while a parson walking past  inspects her derriere most carefully, apparently oblivious to the fact that his tricorn hat has sailed away on the breeze… on the right a fisher-woman has fallen, scattering the day’s catch across the pavement outside the printshop of S W Fores, who just happens to be the publisher of the print. 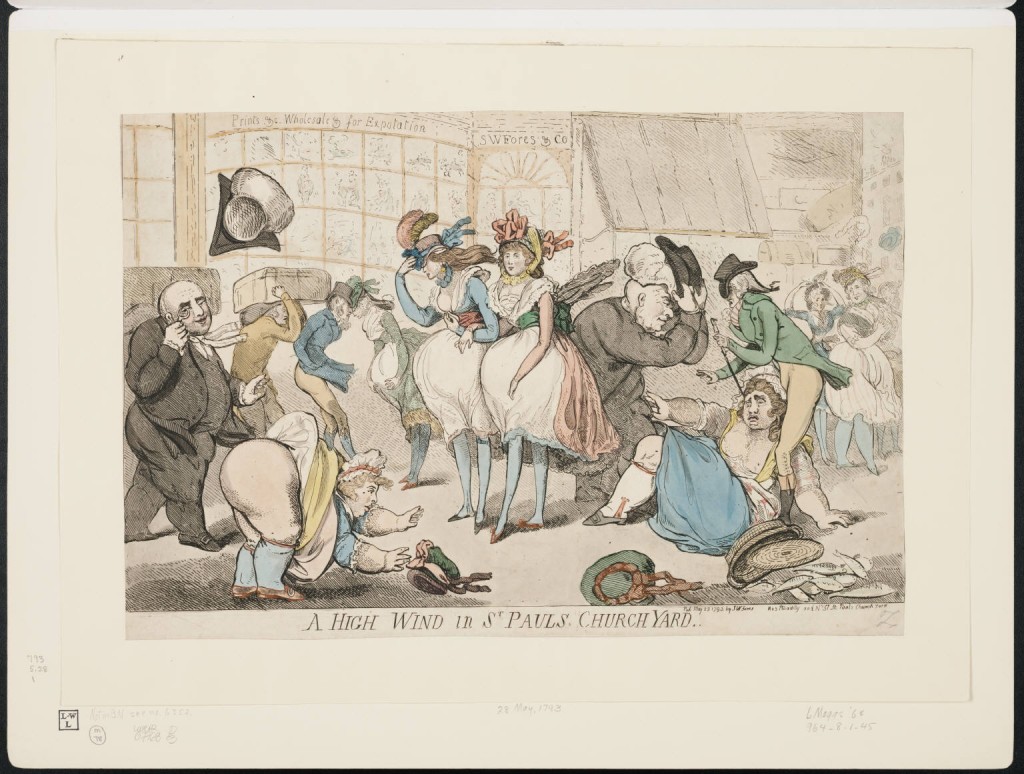 There was clearly something about foul weather and print shops – here is Gillray’s “Very slippy weather.” 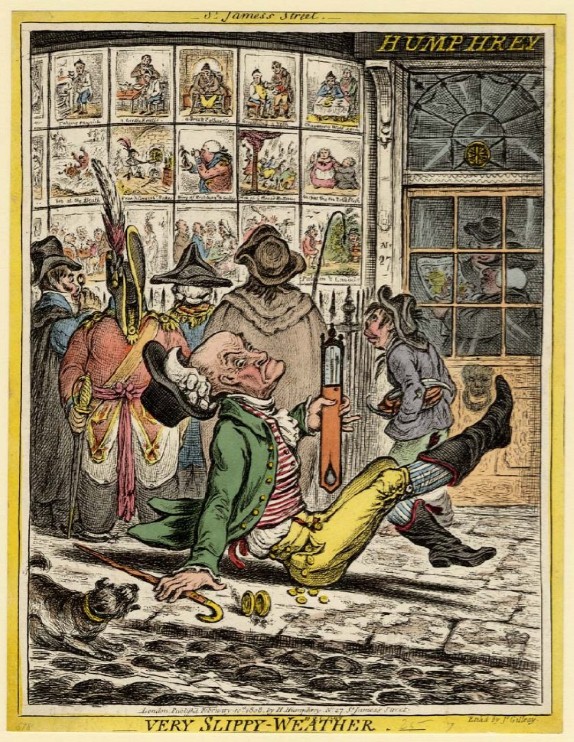 It shows an old man, holding a thermometer, slipping to the pavement outside Hannah Humphrey’s print shop. His gold coins and his snuff box tumble out of his pockets: no-one notices as they are looking intently at the prints on display. The window is filled with Gillray drawings, and the print itself was published by Hannah Humphrey with whom Gillray lived for twenty years.

Some people apparently enjoyed seeing themselves lampooned – others were not so keen as in this print: 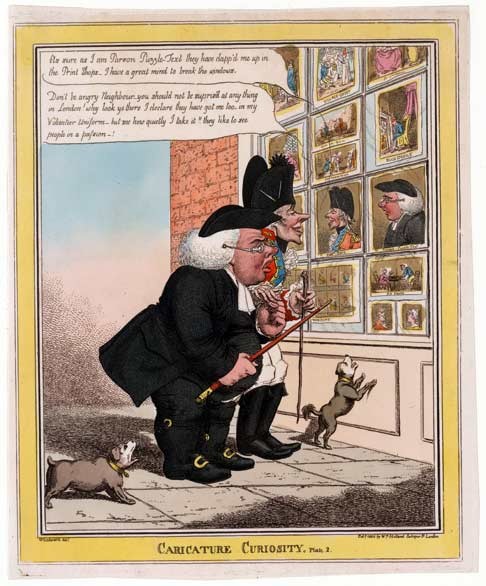 The fat parson looks at his caricature and exclaims “Be sure as I am Parson Puzzletest – they have clapped me up in the Print shop. I have a great mind to break their window” The soldier rather admires his image and says “Don’t be angry neighbour, you shouldn’t be surprized at anything in London. Why look ye here I declare they have got my look in my Volunteer Uniform.”

Theodore Lane drew this one of a scene outside  the bow-fronted window of George Humphrey’s print shop  – and it is possible to identify some of his prints on display. The motto – taken from the Loyal Order of the Garter – is ‘Honi Soit Qui Mal y Pense’ – shame on he who thinks evil of it

The British Museum has this image  showing  the owner of an unspecified print shop standing outside his premises in 1820: 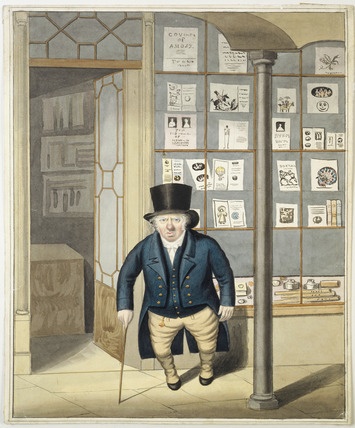 But my favourite  one is this: 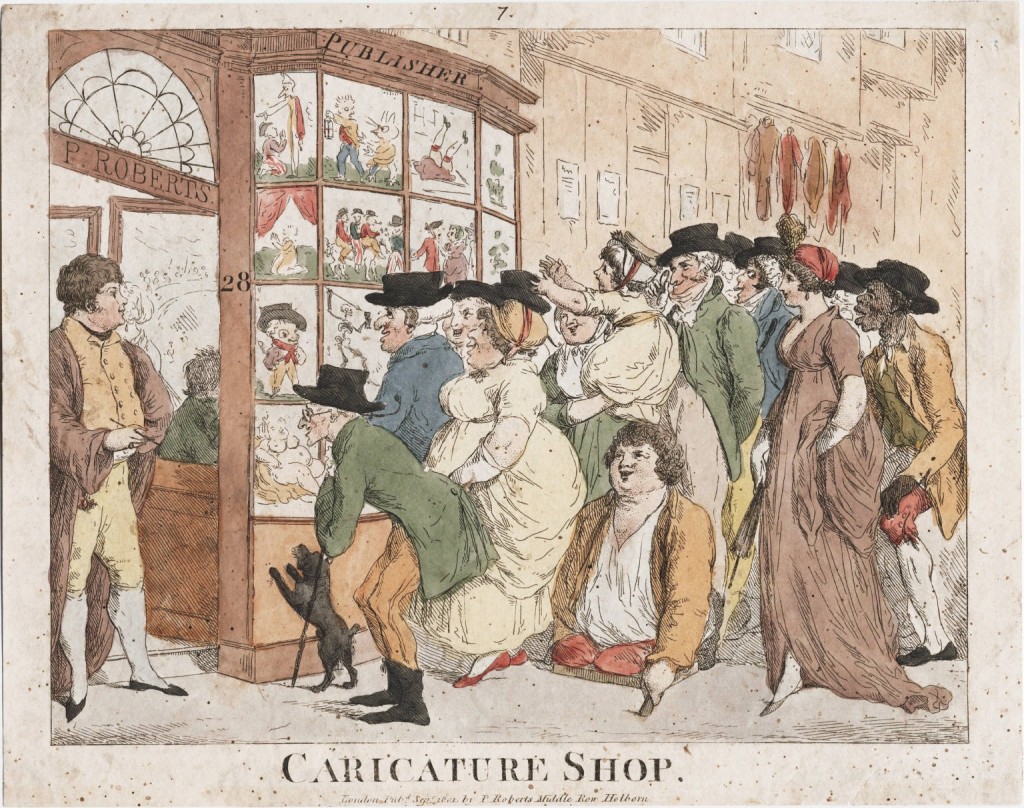 Entitled “The Caricature Shop” it takes place outside the print shop of P Roberts at 28 Middle Row, Holborn and displays the full range of the caricaturist’s stock in trade – the hunchback, the fat lady, the woman of fashion, the limbless man on a sled – and in the background, very much out of things, a solitary black servant trying to see what is going on.