The Queen’s Ass, or how a donkey earned its stripes… 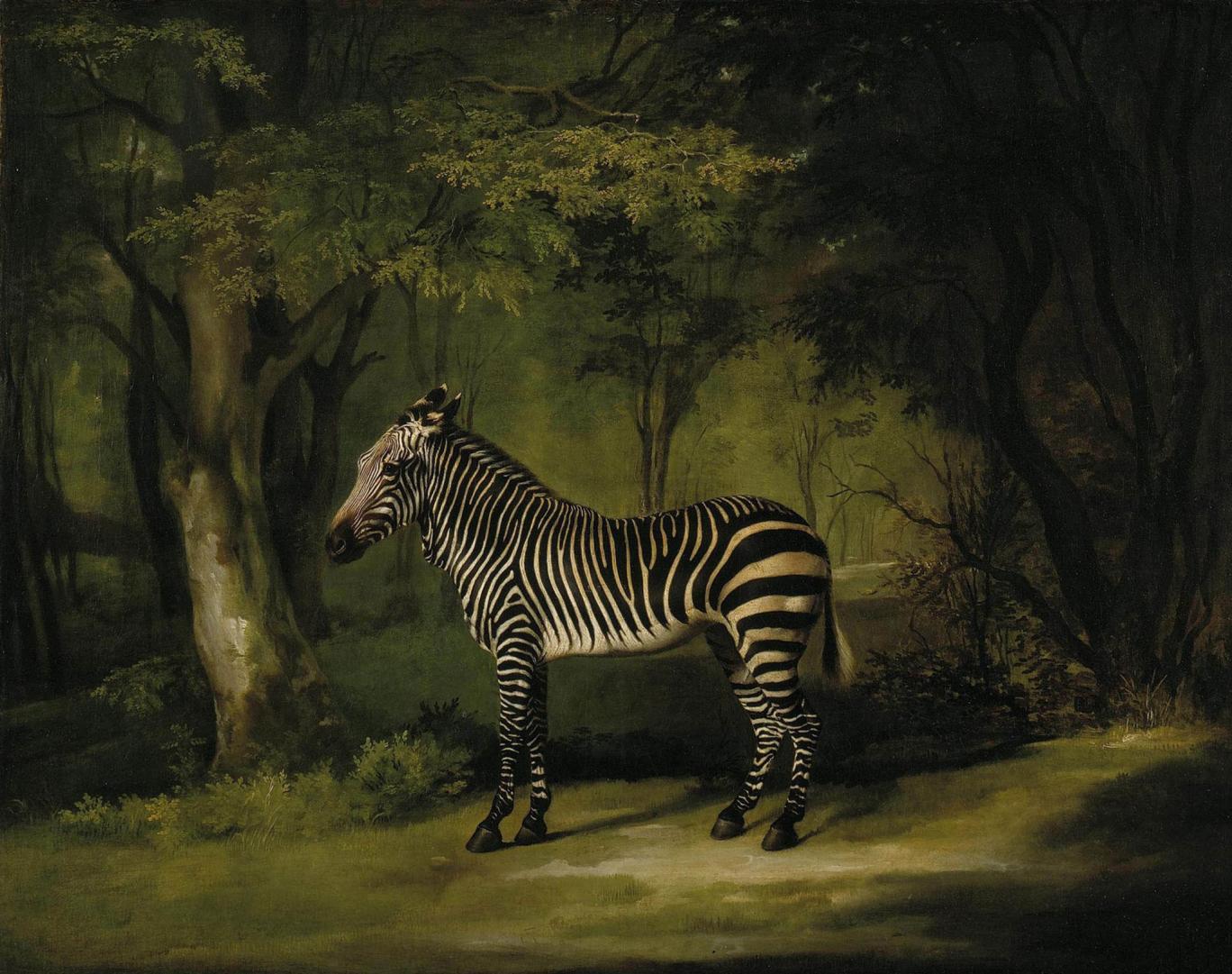 Standing in the dappled shade on the edge of a woodland  a zebra looks majestically … around the gardens of Buckingham House. The scene was painted by George Stubbs and the picture, shown courtesy of the Yale Center for British Art, is one of a number of exotic wild animals painted by Stubbs. Normally this artist was known for his equine paintings, and he achieved his amazing lifelike studies by spending hours dissecting dead horses. By revealing the muscles and ligaments and by attaching weights and pulleys, he was able to see how the animal moved. But this time the subject, a zebra, was still very much alive and kicking. Besides, its owner was no less a person than Her Majesty the Queen and she was rather fond of her zebra, or she-ass as it was known, on account of the fact that it/she was a wedding present.

The Queen, Charlotte of Mecklenburg-Strelitz, had married King George III on 8 September 1761 in the Chapel Royal, St James’s Palace and of course that raised an immediate problem for all the officials, diplomats, courtiers and hangers-on: what to give the royal couple as a wedding present? For the governor of the Cape in far off South Africa it was simple – round up a couple of Cape zebras, one male and one female, load them on board HMS Terpsichore under the command of Sir Thomas Adams, and pack them off to London. Unfortunately the male zebra died on the way, but the “Queen’s Ass” (as she was rudely known from the outset) was a favourite of the young Queen. The year was 1762 and a constant stream of visitors called to see the beast, reputedly the first such zebra ever observed in  Great Britain. As one observer noted: “The Queen’s she-ass was pestered with visits, and had all her hours employed from morning to night in satisfying the curiosity of the public. She had a sentinel and guard placed at the door of her stable. . . . The crowds that resorted to the Asinine palace were exceeding great.”  Was the zebra lonely for company? Apparently not, because she was  given the company of a royal elephant (my, how those royals must have loved opening their presents from far away countries!).

I rather like the story recounted by Sir David Attenborough to the effect that the Queen wished to breed from the zebra, and in the absence of a male of the species resorted to the ploy of getting a male donkey, painting white stripes across its backside, and introducing it to the “Queen’s Ass”. Incredibly the ruse worked – the zebra became pregnant and in due course gave birth to a “zebroid”. The Queen’s Ass lived until 3 April 1773, having been moved to the Royal Menagerie at the Tower of London. Apparently the taxidermists then got to work and before long the stuffed remains were on display at The Leverian, after it had moved for Leicester Square to its new home at the end of Blackfriars Bridge. 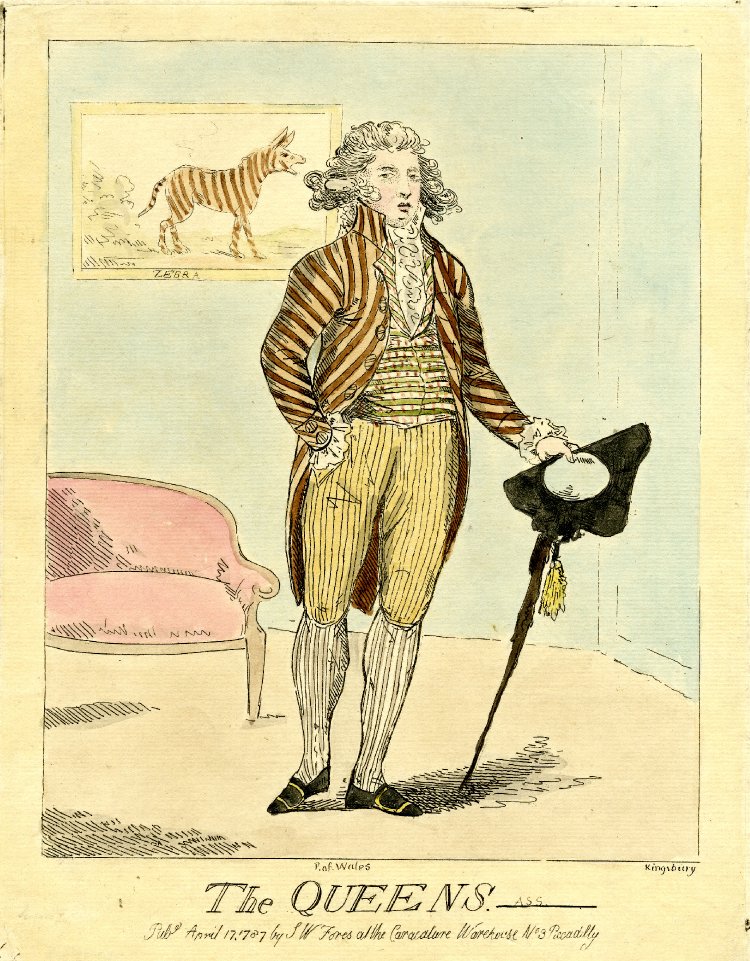 The Queen’s Ass – otherwise known as the Prince of Wales.

In its lifetime the poor animal became a pseudonym for any of the Queen’s favourites, most notably the Prince of Wales, shown here with his striped jacket, waistcoat and stockings. In time the epithet was applied to others such as William Pitt and a number of other sycophantic politicians. It became an easy symbol for caricaturists. The public were quickly familiar with the expression “The Queen’s Ass” especially after this rude ditty was published: 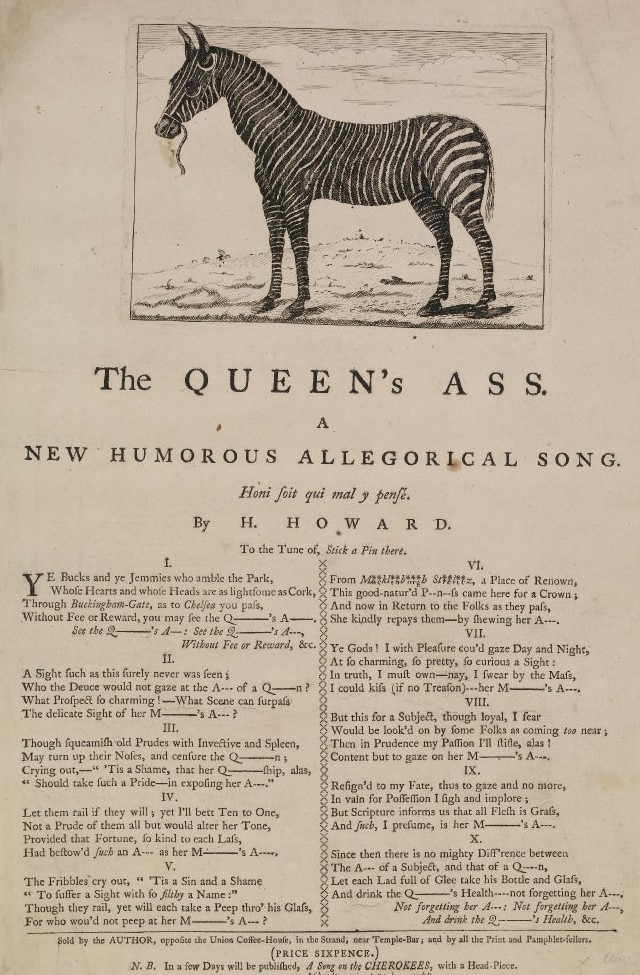 Ye Bucks and ye Jemmies who amble the Park,

Whose Hearts and whose Heads are as lightsome as Cork,

Through “Buckingham Gate”, as to “Chelsea” you pass,

Without Fee or Reward, you may see the Q—‘s A–.

(The Queen’s Ass. A new humorous allegorical song . . . By H. Howard, To the Tune of “Stick a Pin There”. Broadsheet, shown courtesy of the British Museum). 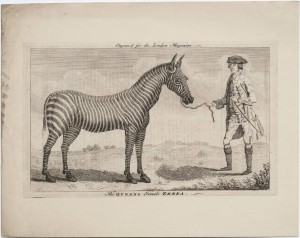 ‘The Queens Female Zebra’  shown on the Lewis Walpole Library site and appearing first in 1762 in The London magazine; or, Gentleman’s monthly intelligencer.

Other caricatures lampooned a variety of political allies of the Queen, as here in ‘The Asses of Great Britain’ (also via Lewis Walpole Library). It came out in 1764 and was drawn and published by John Jones, and is having a go at the Earl of  Bute, George Whitefield,  the magistrate Sir John Fielding, Irish writer Arthur Murphy,  and the Scottish poet and author Tobias Smollett. 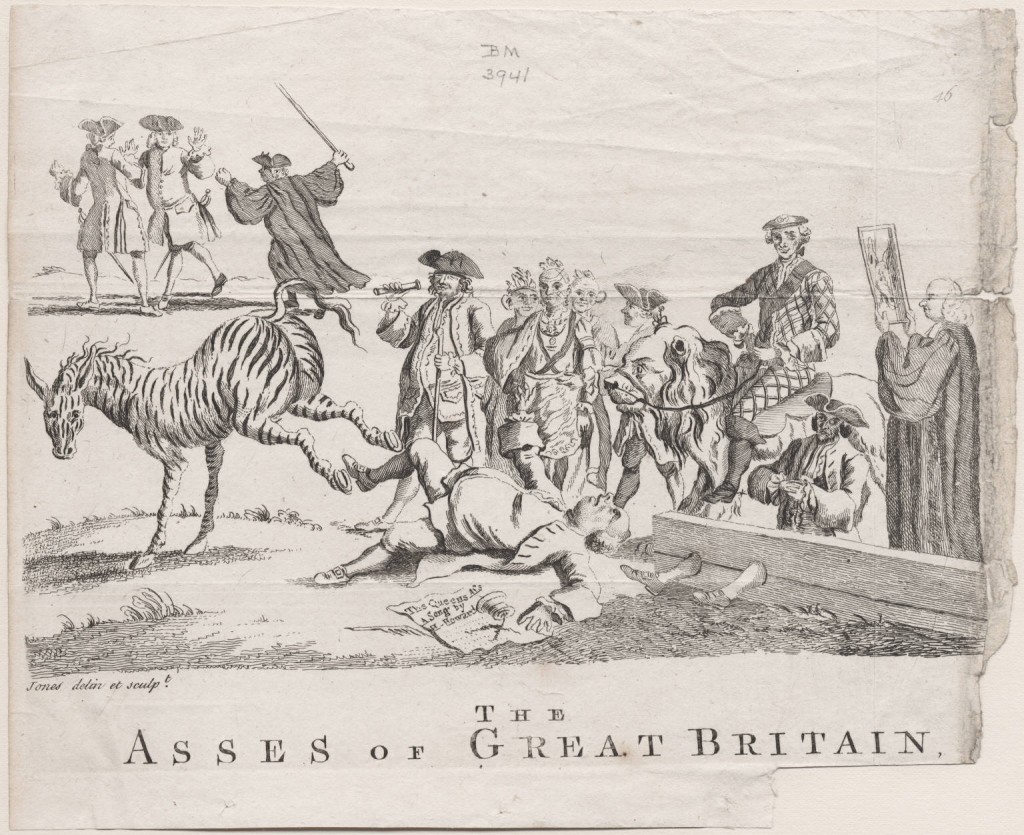 Sometimes the Queen’s Ass was a metaphor for the Queen herself, as with this caricature, apparently  by Thomas Rowlandson, from December 1788 and entitled ‘The Q.A. loaded with the spoils of India and Britain”. It is shown on the British Museum site who describe it as “Pitt rides (right to left) a zebra; he sits on the animal’s hind quarters, flourishing a whip; before him are two panniers filled with jewels…The zebra (the Queen) is led by Dundas (left) … and urged on by Richmond (right), who prods it with a goad. It says, “What are Childrens rights to Ambition – I will rule in spite of them if I can conceal things at Q.” [Kew.] In front of Dundas (left) is a signpost: “To Tower Hill by B——m [Buckingham] house”. 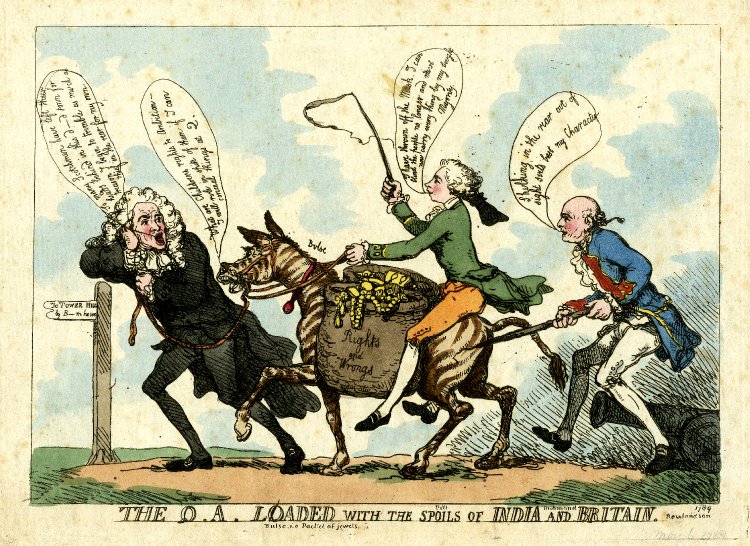 So, the zebra became a shorthand for  royal greed and stupidity. In Return to the Political Ark, also on the British Museum site, we see William Pitt as the Queen’s Ass: 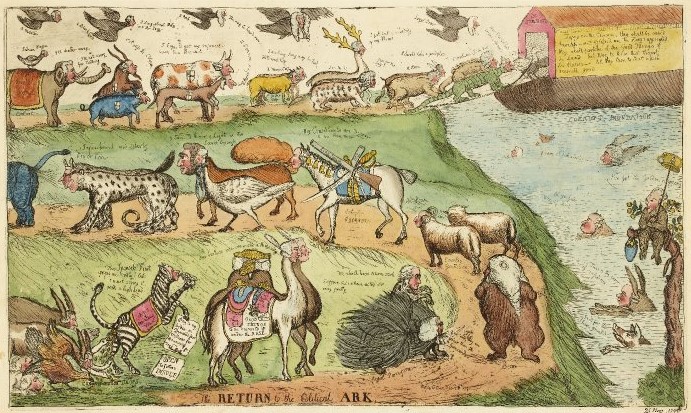 He is shown as one of a procession of Members of Parliament heading for the ark (representing the House of Commons). The British Museum commentary states: “In the lower left corner is Pitt as a zebra on his hind-legs ; he holds a bunch of grapes to his mouth, in his other forefoot is a paper inscribed ‘Pay to my Order on Demand five Millions for Bouncing. P. To John Bull’; beside it is a paper inscribed ‘Open to future Insult’. On his back is a saddle-cloth inscribed ‘Art of preventing War’. He excretes ‘Convention Drops’ which are eagerly devoured by geese, dogs, a cock, and two asses with human profiles”

Given that this was supposedly the very first time a zebra had been seen in the country these caricatures give some idea how quickly the exotically marked animal captured the human imagination. Others quickly followed – in 1779 one was being exhibited at Astley’s Amphitheatre near Westminster Bridge. I came across the occasion when researching for my book “Astley’s Circus – the Story of an English Hussar” about the great exhibitionist Philip Astley. Mind you, Astley was keen to get rid of the creature and advertised that it was available for purchase for 400 guineas. I suspect that he would have despaired of training the animal, since obedience was the keystone of the Astley act. A disobedient zebra, however pretty, was never going to make it as a star. It was never going to rival General Jackoo, his performing monkey, and so the zebra went the way of the ostrich, another of Astley’s exotica …

Another zebra collector was Robert Clive. I am not quite sure why “Clive of India” chose an African animal but presumably no self respecting nabob wanted to be upstaged by the Queen. Apparently he had his own private menagerie – and the same story is told that he successfully introduced his (female) zebra to a paint-striped male donkey, with successful results. When Clive died in 1774 an inventory of the livestock at his home showed a zebra and foal, two small cows, two spotted deer,  two antelopes, six hog deer and, bracketed together as “very troublesome”, seven goats and an African bull. According to a helpful paper published by the University of York:  The running and Grazing of the Young Zebra cost 3s. a week, while in 1777 £18 8s.6d. was spent on the Young Zebra being sent into Shropshire. Quite what happened after it got to Shropshire I do not know – perhaps it got sold to Astley.

Years later, George III was presented with a quagga. A sub-species of the Plains Zebra, the quagga was extinct by the late 1870s, but for some years  a royal specimen was kept at Kew. This is shown courtesy of the Yale Center for British Art.

Rather more about the exotic animals collected by the Georgians can be found in Christopher Plumb’s excellent book “The Georgian Menagerie: Exotic Animals in Eighteenth-Century London” details of which appear here.  Christopher was kind enough to draw on some of the records kept by my ancestor Richard Hall, so the least I can do is return the mention! 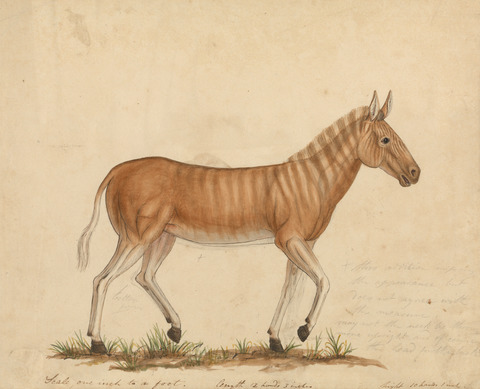 James Sowerby’s portrait of a quagga, painted in 1824

3 thoughts on “The Queen’s Ass, or how a donkey earned its stripes…”