“Rose, dressed and took breakfast and then ordered the carriage to take one to Drury Lane Theatre Royal. Arrived at three o’clock for the Royal Command Performance of ‘She would and She wouldn’t’; got shot (twice) by some madman, watched most of the play but fell asleep towards the end; went home.”

So, to paraphrase the diaries of our dear King George III, might the monarch have written up the story of his day 213 years ago.

He had arrived at the theatre to a packed audience, who all stood for the playing of “God Save the King”. In the audience was a deranged former soldier who believed that, by dying, he would herald Christ’s Second Coming. His cunning plan to bring about his own death: shoot the king and be sent to the gallows for treason.

The man’s name was James Hadfield. The story goes that he had suffered a number of severe sabre wounds to the head while serving in the British army. Whatever the cause, he was clearly a total nutter, and not a very good shot. One of the slugs missed its target by 14 inches, the other brought down flakes of plaster from the ceiling of the Royal Box. Luckily one member of the audience – a David Moses Dyte – had the presence of mind to disarm the assailant before he could do any more damage to the building – or the King. Dyte’s reward? He was eventually made up to the exalted position of  ‘Purveyor of Pens and Quills to the Royal Household’. Now that’s what I call gratitude! 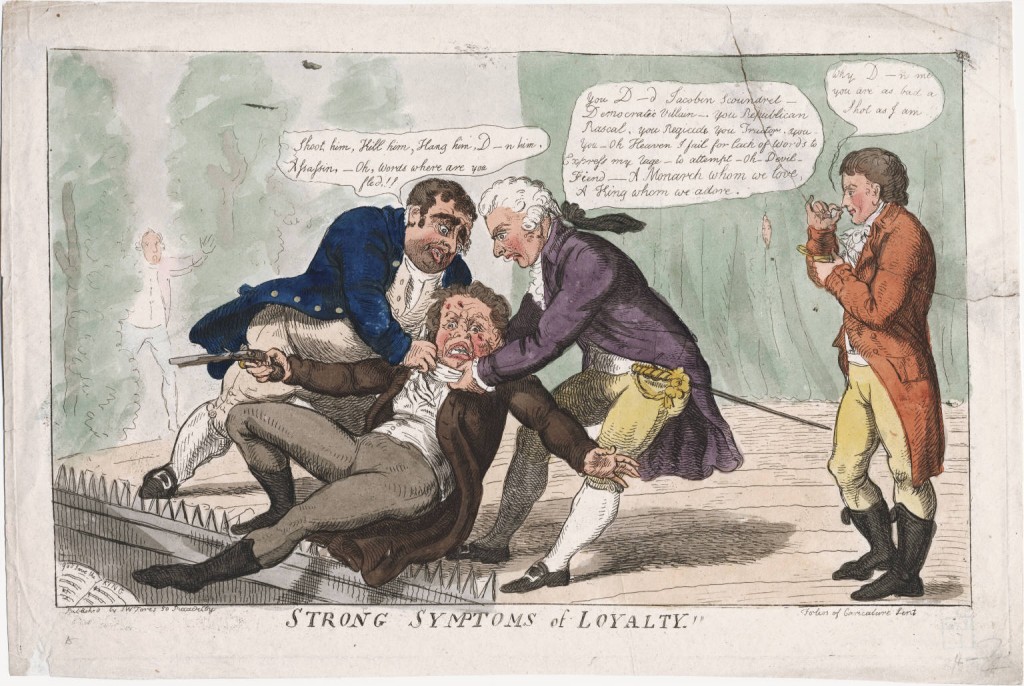 An etching entitled Strong Symptoms of Loyalty courtesy of the Lewis Walpole Library appeared shortly after the incident. It shows an imaginary scene before Hadfield was bundled over the rails and into the orchestra pit and dragged away to the music room. Charles James Fox grapples with Hadfield and shouts: “Shoot him, Kill him, Hang him, D—n him, Assassin – oh words where are you fled!!”

Theatre manager Sheridan exclaims “You D-d Jacobin scoundrel – Democratic Villain – You Republican Rascal, you Regicide you Traitor, you – you – Oh Heaven I fail for lack of words to Express my rage – to attempt – oh Devil – Fiend – A Monarch whom we love, A King whom we adore”

On the right, the snuff-taking George Tierney looks on unconcernedly. He casually remarks “Why, D-n me, you are as bad a Shot as I am.”

What actually happened was that  Sheridan came into the music room with the Duke of York and the prisoner apparently told the Duke “God bless your Royal Highness, I like you very well; you are a good fellow. This is not the worst that is brewing.”

It turns out that Hadfield had been an orderly working for the Duke, and he admired the Duke greatly. Hadfield was taken away and later charged with High Treason. To the great admiration of all present,the King insisted that ‘the show must go on.’ He apparently enjoyed the play so much he fell asleep in the second half… 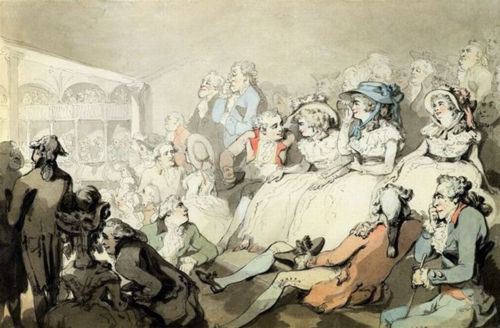 The case against Hadfield came to trial in the Court of King’s Bench in June 1800. Various members of the public were called to give evidence as to what happened – the pistol was produced by a Mr Wright, who had picked it up off the floor. The Duke of York was called, which must have been a little embarrassing for him, with questions along the lines of “Do you normally employ complete madmen as your orderly?”

The questioner was the great barrister Thomas Erskine. He had a field day defending his client, who had pleaded not guilty by reason of insanity. The problem was that in all other respects the prisoner appeared perfectly normal. According to the Newgate Calendar, seeing the Duke in court upset the prisoner greatly, causing him to exclaim in great agitation “God bless the Duke, I love him!” The Court immediately gave directions that he should be permitted to sit down; and Mr Kirby, the keeper of Newgate (who all the time sat next him), told him he had the permission of the Court to sit down, which he did, and remained composed during the remainder of the trial. The Newgate Calendar continues ‘When the prisoner was asked what could have induced him to commit so atrocious an act, he said he was tired of life, and thought he should have been killed’.

Erskine called various medicos to attest to the meaning of insanity and insane delusions, the problem being that up until that time the defence of insanity was only available if the insanity was so total that the accused was utterly irrational and had no control over his actions. That was clearly not the case here – Hadfield obviously intended to kill the King, and had brought along his pistol for the express purpose of firing it at the monarch. Eventually the judge halted the trial saying that the medical evidence meant that the verdict would inevitably mean an acquittal, because it was quite obvious that the guy was as mad as a hatter. But he added that “the prisoner, for his own sake, and for the sake of society at large, must not be discharged”.

The difficulty here was that in the past, the criminally insane were often handed back to the families to be looked after, but Hadfield could hardly be let loose to wander the streets. Parliament quickly passed new laws – the Treason Act and the Criminal Lunatics Act (both in 1800). The latter enabled prisoners who were found to be criminally insane to be locked up indefinitely, and Hadfield was carted off to Bedlam, or more correctly, Bethlem Royal Hospital. 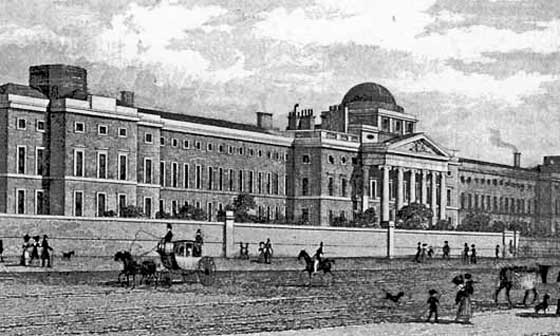 When the asylum was rebuilt in 1815 (which involved moving it to St George’s Fields, Southwark) Hadfield moved too. Apart from one time when he escaped and headed for Dover, intent on catching a ferry to France, he finished his days in the asylum, eventually dying of tuberculosis in 1841.

Poor Sheridan: he was already stretched financially by the cost of building the new theatre, and running it was an expensive business.In 1809 disaster struck and the theatre was burned to the ground. It gave rise to the famous remark by Sheridan, when he was encountered wandering around with a wine glass in his hand, watching the flames destroy his project:  “A man may surely be allowed to take a glass of wine by his own fireside.” 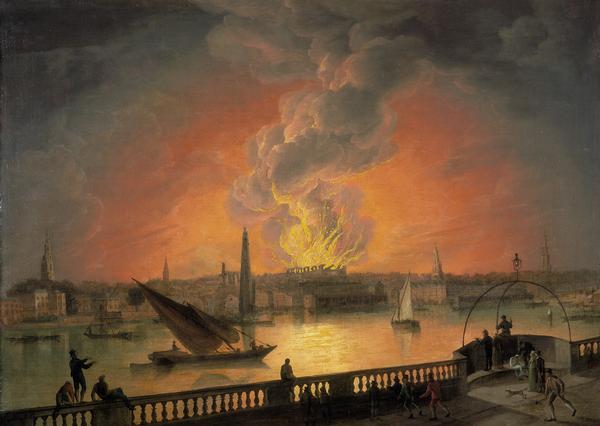 The loss of the theatre completed his financial ruin – he died in poverty in 1816 and was buried in Poet’s Corner of Westminster Abbey.