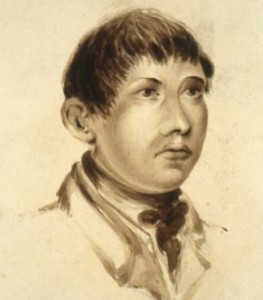 On a fine day in January 1821 seventeen year old Eliza Balsum was crossing the stream near her home in Hanham on the outskirts of Bristol. With her was her new beau William Waddy. They were laughing and joking as they used the stepping stones to keep clear of the water. On the other side of the stream appeared John Horwood. The same age as Eliza, John had previously been Eliza’s boyfriend but she had broken off the relationship towards the end of 1820 and he had threatened violence against her. Seething with jealousy, John observed the carefree pair and picked up a stone, hurling it at Eliza. It struck her on the temple, causing her to stumble and fall. The poor girl was supported back to her mother’s home nearby, still conscious but in obvious discomfort. 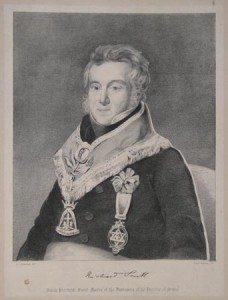 Dr Smith in his masonic robes .

After a couple of days being treated at home she attended the Bristol Royal Infirmary as an outpatient, where she was treated by Dr. Richard Smith, senior surgeon. He observed the depressed fracture at her right temple and decided to have her admitted as a patient to his hospital. Dr. Smith was present when a statement was made by Eliza, in which she named John Horwood as her attacker. Days passed, and Eliza’s condition got worse rather than better, until the good doctor decided that he needed to operate to relieve the pressure on the brain. Trepanning (i.e. drilling a hole in the skull) was a barbarous method of treatment in the days before anaesthesia, and with no understanding of antisepsis. Within a couple of days the girl was dead – and John Horwood was immediately charged with murder. The date was 17th February 1821. His trial took place at the Star Inn in Bedminster (Bristol) and lasted one day. Ironically the trial saw the two people who caused Eliza’s death to be present in the same room, Horwood and Smith, but in very different contexts: one as them as the accused; and the other as main witness. There was therefore no examination as to the actual cause of death, or whether the trepanning operation was bungled. Instead, Dr. Smith recounted the statement made by Eliza, outlined his valiant efforts to save the poor wretch, and convinced the court that it was all John Horwood’s fault. Found guilty, John was sentenced to death and the punishment was carried out within 48 hours. It was 13th April 1821 and John had turned 18 years of age just three days previously. 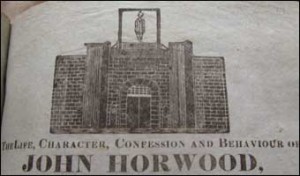 Horwood took several minutes to die by slow strangulation. The event was hugely popular with the populace of Bristol, with thousands of people turning out to watch. The prison was adjacent to the unfenced stretch of river known as the New Cut, and the authorities were seriously worried that the crush would lead to spectators falling in and drowning.

That was not the end of his family’s suffering. They were a mining family from Hanham. John was one of ten children and many of the family attended the hanging, intent on claiming the body afterwards so that it could be given a proper burial. Dr. Smith was having none of that – the body was requisitioned by him and he was determined to use it for dissection purposes. 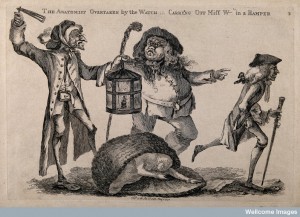 Fresh cadavers were hard to come by legitimately, and here was a corpse he could examine without having to employ body snatchers, as in this etching from the Wellcome Institute, showing the watchman encountering two men who have dug up a recently buried body of a young woman.

A tussle broke out as the family sought to snatch the corpse of John Horwood away, but they failed and Dr. Smith took the body back to his rooms at the Royal Infirmary. After analyzing the body parts he kept the skeleton, still with the noose around its neck, in a specially made cupboard in his home, where it remained until his death on 24th January 1843.

The noose around Horwood’s corpse

It then passed to the Royal Infirmary and there to Bristol University where it remained until nearly two centuries after Horwood had died.

But that was not the only indignity: Smith was in the habit of composing rhymes about the deceased criminals who came before him in his laboratory, and Horwood was no exception. The verse, plus Smith’s notes on the case and Eliza’s confession, were then made up into a book…..and bound with John Horwood’s skin! This macabre practice was not all that uncommon in the 17th and 18th Centuries. It is known as anthropodermic bibliopegy and involves flaying the corpse and sending the skin away to be tanned. Smith’s book still has the invoice from the tanner (one pound ten shillings) inside, and the skin is embossed with a skull and crossbones in each corner. The original is still held by the Bristol Records Office, although it is now very fragile and the contents have been digitised. The sketch of John Horwood, shown at the beginning of this post, was included in the book.

Another examples of the practice of anthropodermic bibliopegy is this one using the skin taken from one of the Gunpowder Plot conspirators (Father Garnet). An impression of his features has been stamped upon the binding as a reminder of what he looked like, and is still visible, albeit in a very indistinct manner.

For Dr. Smith, it was business as usual: he was a hugely popular figure in his home city of Bristol, doing much charitable work for schools such as Red Maids School. He was a local councilor for many years, and was Deputy Grand Master of the Masonic Lodge close to his home at 38 Park Street. When he died, of apoplexy, in 1843 the whole city seems to have come to a stand-still in mourning. Crowds of many thousands thronged the streets and at one stage the jostling mass of humanity stopped the funeral cortege altogether. He was buried at Temple Church in Bristol. The Bristol  Mirror sadly reported “In his decease Bristol has lost one of her most devoted sons, and best and brightest ornaments.” It described his funeral with the words  “All associated together on this solemn occasion and felt the bitter pang of regret at the loss of one who was a benefactor to his race – a true philanthropist.”

And what of the mortal remains of John Horwood? After languishing for 190 years in a cupboard, it was finally time for him to be laid to rest. So it was that in April 2011, on the exact anniversary and time of his death, John’s body was brought back to Hanham and given a proper funeral. It marked the end of a personal crusade by Mary Halliwell, the great-great-great-granddaughter of Horwood’s brother. The coffin was draped in velvet and carried on a wheeled bier in the manner of funerals of the period of his death. A dignified end at last to a somewhat undignified episode which shows us not just the barbarity of English justice but also the inadequacy of medical treatment some 200 years ago.

6 Responses to “Another look at he sad case of John Horwood, who took 190 years to be buried.”