The Scots and the Irish: a repeat of further thoughts.

In connection with yesterday’s post about English attitudes towards their Irish and Scottish compatriots I  came across a pair of Gillrays (although he used the nom de plume ‘C Loraine Smith’ –  a dig at the landscape painter Claude Loraine) from 1805. 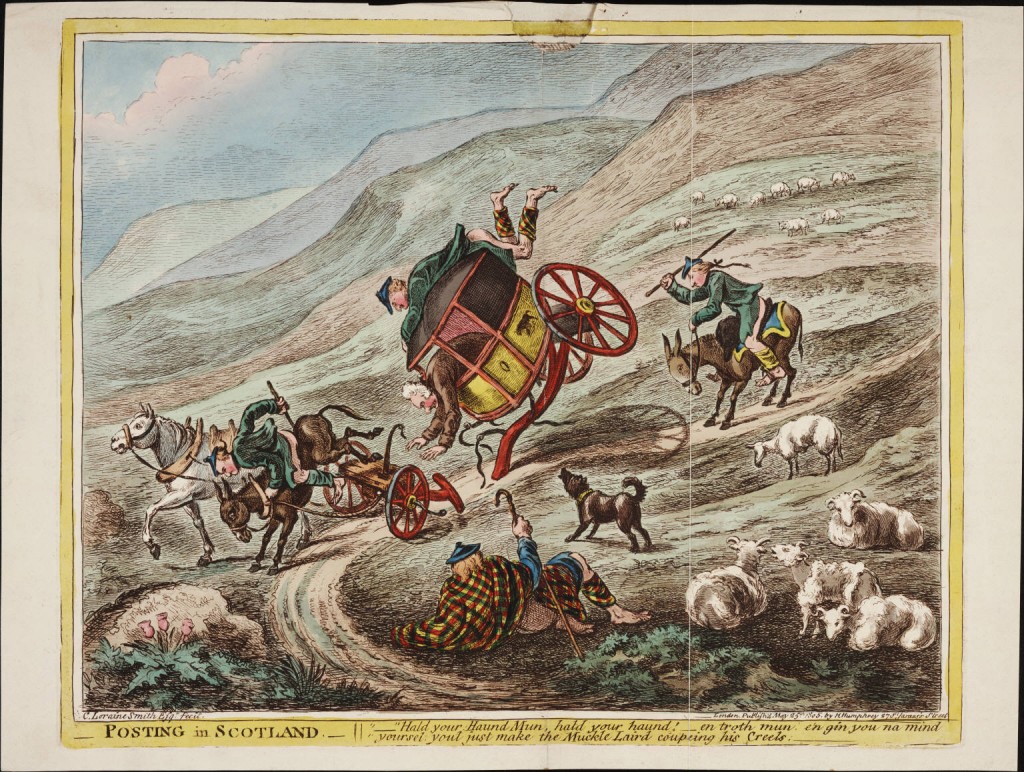 The first, called ‘Posting in Scotland’ shows an old post-chaise coming round the corner on a steep bumpy road, breaking its axle and hurling the occupants onto the highway. A shepherd, swathed in tartan, sits watching as the horses, somewhat resembling asses, kick over the traces. Driver, postilion and  rider are all butt-naked, and the sheep are totally unperturbed by the commotion.

The caption, which I will not attempt to render into my mother tongue, is   “Hald your Haund Mun, hald your haund! – en troth mun: en gin you na mind yoursel you’l just make the Muckle Laird coupeing his creels.” I have no idea what ‘coupeing his creels’ means! All contributions gratefully received…* 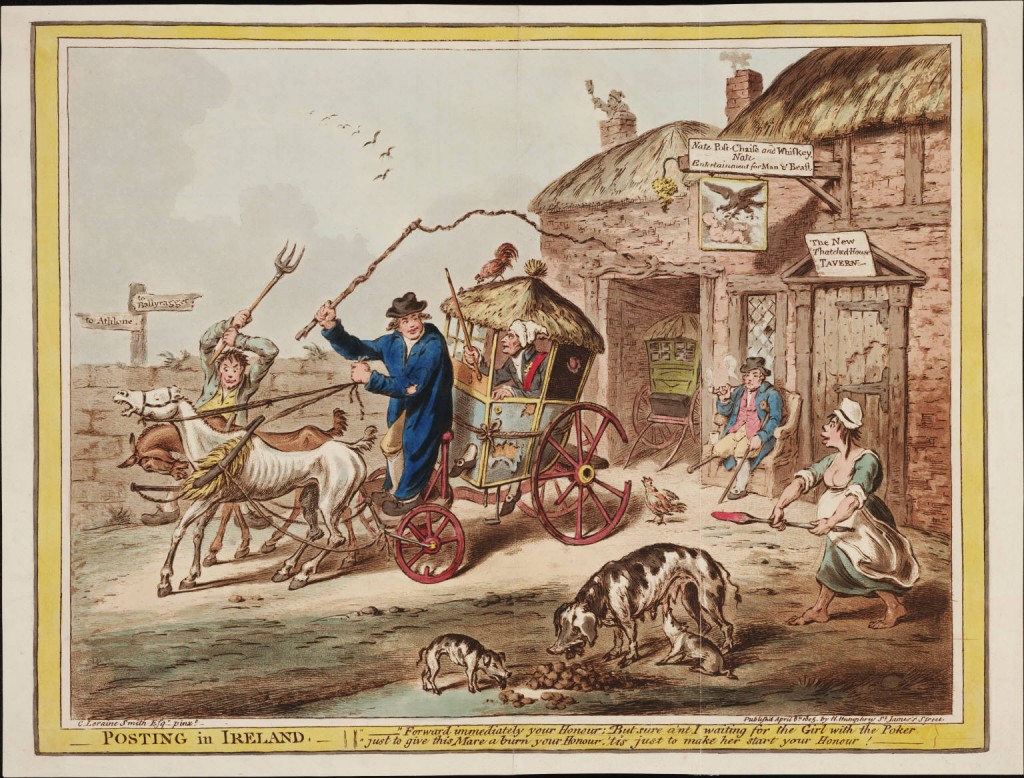 Its companion piece had appeared the month before under the title of ‘Posting in Ireland’ and shows a coachman preparing to leave the coaching inn known as The New Thatched House Tavern, somewhere between Athlone and Ballyragget. The emaciated horses are rib-thin; there is an air of poverty about the place; and the sow and her piglets are devouring potatoes. The woman advances towards the decrepit carriage, with its thatched roof, wielding a red hot poker with which to brand the horses into action.

The driver explains to his fare: “Forward immediately your honour; but sure a’nt I waiting for the girl with the poker just to give this Mare a burn Your Honour, tis just to make her start your Honour.”  Needless to say the carriage is not going anywhere – the rim and spokes of its wheels are broken…

There are some lovely details in it – the sweep emerging from the chimney and giving a wave with his broom, the chicken on the roof of the coach pecking at the straw, the yokel waving a pitchfork.

As before, the images come courtesy of the Lewis Walpole Library. They really are extraordinarily helpful – I e-mailed the Library, asking for seventeen high definition images for use in my forthcoming book “The Georgians – an Illustrated Introduction” and back they came the next day, free of charge…. that’s what I call good service!

Finally, I see that the pair of prints are shown on the G J Saville site here on sale for £900 the pair (although I am not sure that the stock details are up-to-date).

* My thanks to Elizabeth Cornwell for explaining that it means …. falling over.

2 thoughts on “The Scots and the Irish: a repeat of further thoughts.”