When the French Revolution started, many in this country were in support of the uprising, horrified at the excesses of the French monarchy. This is borne out by the attitude of caricaturists such as Gillray, and of many other artists.

A popular support for the revolution is shown by Philip Astley who, within weeks of the storming of the Bastille, was re-creating events on stage at his amphitheatre premises at the Lambeth-end of Westminster Bridge. Similar re-enactments were being performed at Sadlers Wells and at Hughes’ Royal Circus on Blackfriars Road. 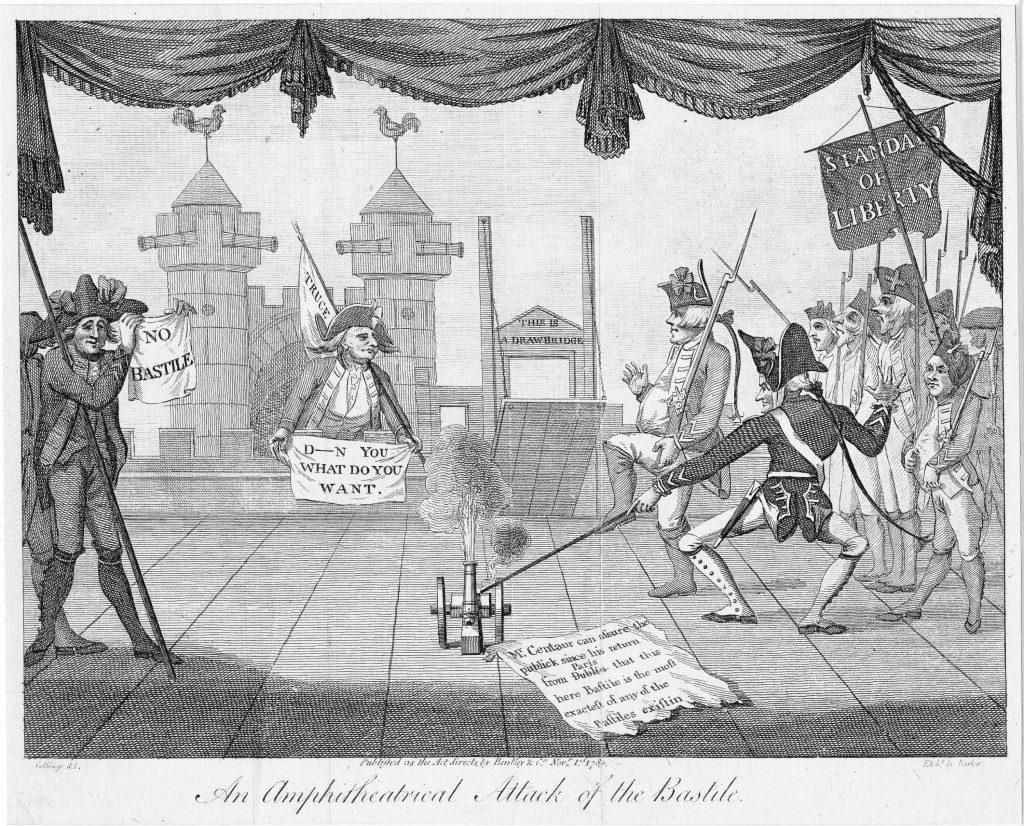 A caricaturist’s view on Astley’s re-creation of the storming of the Bastille, 1792, shown courtesy of the British Museum.

The etching appeared on 1st November 1789, just a few months after the attack on the famous prison.  The British Museum site describes it as:

“A stage representation of the fall of the Bastille. At the back of the stage is the gate of a fortress flanked by pinnacled turrets, each with a cock on the summit. Next it is a flimsy timber drawbridge inscribed ‘This is a Drawbridge’. In front of the gate and behind a low battlement stands the governor (de Launay), a flag inscribed ‘France’ over his shoulder, but holding out a cloth inscribed ‘D—-n You What do you want’. In the foreground are the assailants of the Bastille with muskets, some in regimentals with cocked hats and long pigtail queues. One man in back view, striking an attitude, fires with his cane a toy cannon. They have a ‘Standard of Liberty’ of makeshift appearance. There are eight men on the right and two on the extreme left, one of whom holds up a cloth inscribed ‘No Bastille’. On the front of the stage is a paper: ‘Mr Centaur can assure the publick since his return from Paris [engraved above ‘Dublin’, which has been struck out] that this here Bastile is the most exactest of any of the Bastiles existin.’ The actors are out of proportion to the scenery which is on a very small scale. A festooned curtain hangs above the heads of the actors. ”

But as the horrors of The Terror became apparent, people in this country started to step back in dismay at the antics of the revolutionaries. In 1792 the month of September heralded a blood-bath of grotesque savagery in Paris.

The massacres began on 2nd September and lasted less than a week. The first attack occurred when two dozen priests being transported to a prison named L’Abbaye were attacked by a mob of angry citizens of Paris. They quickly and grotesquely killed all of the priests as they were trying to escape, mutilating their corpses. They went on to kill a considerable number of other prisoners. During the five days of the massacres approximately 1200 prisoners died – roughly half of the entire prison population in Paris. Many of the dead were women and young children – slaughtered in the name of the Revolution. Among the victims were more than 200 priests, almost 100 Swiss guards and hundreds of political prisoners and members of the aristocracy. As The Times asked  in its edition of 10th September 1792, “Are these ‘the Rights of Man’? Is this the LIBERTY  of Human Nature? The most savage four-footed tyrants that range the unexplored desarts  (sic) of Africa, in point of tenderness, rise superior to these two legged Parisian animals —Common Brutes do not prey upon each other.”

The article goes on: ” A ring, a watch chain, a handsome pair of buckles,  a new coat, or a good pair of boots – in a word, every thing which marked the appearance of a gentleman, and which the mob fancied – was sure to cost the owner his life. EQUALITY was the pistol, and PLUNDER the object.” 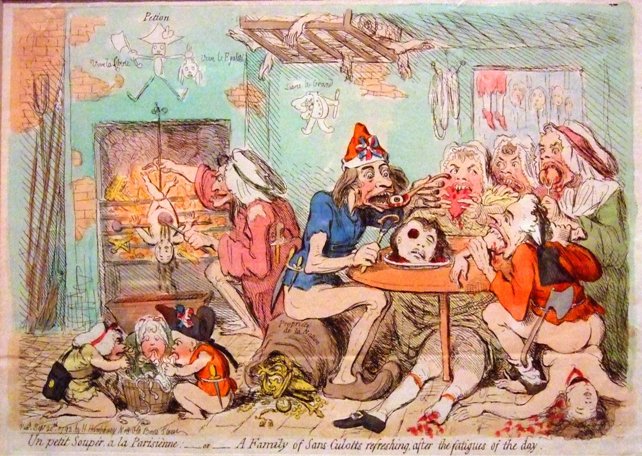 The reaction of caricaturists such as Gillray was immediate and vicious, none more so than in this Gillray print  entitled “Un petit soupir a la Parisienne – or – a Family of Sans Culottes refreshing after the fatigues of the day.”

The phrase “sans culottes” was intended to refer to the working classes –  the shopkeepers and workmen who elected not to wear the pantaloons (“culottes”)  favoured by their wealthier superiors and who instead wore long trousers. Gillray takes the description literally, and shows the French plebeian family, sitting down for their evening meal, naked from the waist down because they have no pants (literally, ‘sans culottes’).   One man is  shown  obscenely sitting on the naked corpse of a woman, while he devours a human arm. His fellow diners are tucking in to a delicious meal…. of human parts. One eats the eye taken from the decapitated head on the dining table; another eats the heart while another prepares to tuck in to the kidneys. Below, to the left, the kids are encouraged to get stuck in on a meal of ….. human entrails. Over in front of the fire an old crone bastes fat over the body of a dead child, turning the spit as her repast gently tenderises.

It is a scene of indescribable horror and revulsion,  an assertion that the lower classes in France were despoiling and murdering the  entire country. Gillray rarely made for easy viewing – none more so than in this savage reaction to a barbaric act. What, I wonder, would his reaction have been to chemical attacks in Syria? How would he respond to the appalling events in Damascus, as civil war  destroys a nation and de-humanises a population? And would we, his audience, pay for a coloured print of a massacre to adorn our living room walls?

[Postscript: this will be the first of a number of posts mentioning Philip Astley (“the father of the modern circus”) – because I am just finishing writing a book about him, in time for the bicentenary of his death in 1814. But there will be no scenes of cannibalism, just loads of circus handbills and tales of horsemanship!]

One Response to “The September Massacre, Paris 1792.”