As a Bristolian I was brought up to believe that the Theatre Royal in Bristol was the oldest working theatre in Britain – although I was aware that it had been hugely modernised and altered over the years. So I was delighted to come across an absolutely splendid provincial theatre known as the Georgian Theatre Royal in Richmond, Yorkshire and which is by far the least hacked-about, the most complete and perhaps the most authentic of the four Georgian theatres still in existence in Britain. Not surprisingly, it has Grade One Listed status, on account of its historic and architectural importance.

The theatre was established in 1788 by a man called Samuel Butler. He had started a small chain of theatres in the North East (at Beverley, Harrogate, Kendal, Northallerton, Ripon, Ulverston and Whitby) and his theatre company performed regularly on a circuit, using Richmond until 1830. Eventually productions ceased, the pit was floored over and the lower area was used for wine vaults. Above floor level, the place became an auction house. By some extraordinary twist of fate nobody destroyed the original boxes or the gallery and the interior remained largely intact. It was “re-discovered” in 1930. Initial restoration projects included some rather garish and inappropriate stage lighting, a somewhat intrusive ventilation system, and rather incongruous gilt ballroom chairs in the various boxes.

In 2003 new renovation works were started – the restorers seem to have carried out a magnificent balancing act between preserving original features, replicating lost ones, and at the same time introducing modern requirements to comply with Health and Safety concerns, For instance, the original theatre would have been lit by candles – and the number of disastrous fires in theatres throughout the Georgian era is testament to the fact that naked flames and flammable stage scenery and curtains do not mix happily! The newly restored theatre therefore has to use “imitation” candle lights, for instance for the footlights. They flicker authentically and can be raised up to stage level or lowered out of sight when not in use. In the main auditorium fifty-four new ‘candles’ have been incorporated, each set in a glass chimney supported by a cast iron fitting. Above each column, small iron rings are hung from brackets to a design derived prevalent in theatres at that time, while the remainder are suspended on large iron rings from the ceiling.

Where possible the restorers have tried to assess the original colour scheme and put in a “best guess” for the design and colour of the features which have been lost. Floor boards have been left as wood, walls are a neutral colour, paintwork is green or blue, and the ceiling is decorated with clouds against a blue background.

Improvements in 2003 aimed at making the place more user-friendly include an extension comprising a box office, a third dressing room, bars and foyers, and greatly improved ventilation and access. 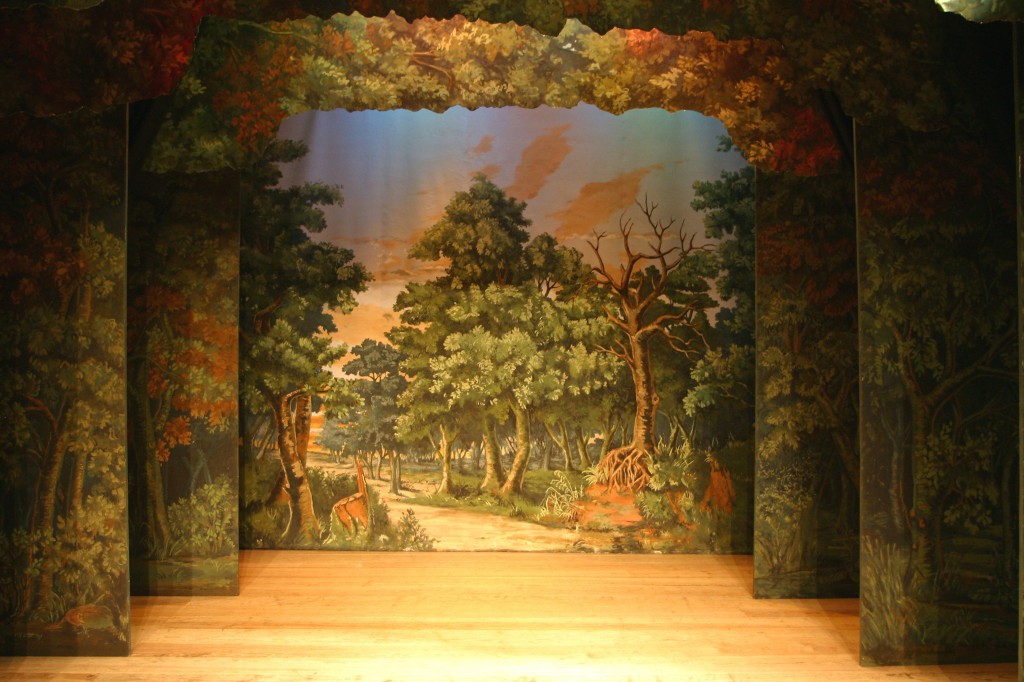 The theatre owns the country’s oldest piece of stage scenery – a “Woodland scene” painted around 1816 but it is too delicate to be in use and therefore a replica “Woodland scene” has been made and is now in use.

There are eleven theatre boxes, all named after playwrights whose works would have been staged by Samuel Butler. They range from William Shakespeare to Sheridan, and from Ben Jonson to Oliver Goldsmith and each box has been sy

mpathetically restored. They look magnificent. Meanwhile down in the pit there are padded benches with detachable backs and removable bench ends designed to extend the benches over the aisles. The end result is a theatre which is now a vibrant part of the community, regularly used for putting on plays, but one which is also faithful to the original ideas of Samuel Butler. He died in 1812 aged 62.

The lovely thing about the theatre is its small intimate size, It has a capacity of 214 and the furthest seat is less than 11 metres from the stage! Talk about up close and personal!

I am indebted to Nicholas Allen for an article on the  Building Conservation  site for details of the restoration, and to the lovely, helpful, people at the Theatre itself for the images used in this post. Their website is here .