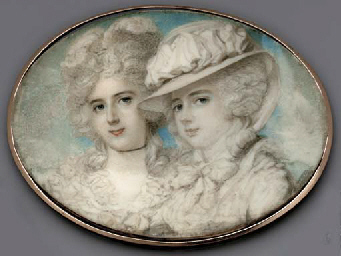 I came across this delightful miniature by Richard Cosway (1742 – 1821) on the Christie’s site of lots sold in 2002. It apparently went for £11,163 – ten times its estimate, and as I am uncertain about the copyright I must stress that the image belongs to Christies or whoever was lucky enough to buy the miniature. I show it because I like it.

The site explains  in the Lot Notes:

“The Waldegrave Sisters: Lady Anna Horatia and Lady Charlotte Maria, wearing white dresses with frilled collar and bows at corsage, Horatia with white plumes in her long powdered curling hair and Charlotte with white bonnet tied with white ribbon under her chin; sky and cloud background”

I find it charming. There were in fact three Waldegrave sisters, born after the marriage  in 1759 between James Waldegrave, 2nd Earl, and Maria Walpole (illegitimate daughter of Sir Edward Walpole). The eldest child, Lady Elizabeth Laura Waldegrave went on to marry her cousin the 4th Earl Waldegrave.

That left Lady Charlotte Maria to marry the 4th Duke of Grafton, while the Lady Anna Horatia ensnared Admiral Lord Hugh Seymour, son of the first Marquess of Hertford. In other words, a rather well-connected, well-married set of sisters.

Their father had died in 1763 leaving their mother a widow at the age of 26. But blow me, within three years she had gone and found herself another husband, no lesser a personage than the Duke of Gloucester, third son of Good King George III. The problem was: Maria was born  illegitimate, and worse still, was a commoner. There was no way the King would have approved of the wedding so they married in secret.

Subsequently Parliament passed the Royal Marriage Act stating that descendants of George II could only marry with the consent of the monarch – but it  was not retrospective so the wedding remained valid and therefore Maria was entitled to be styled “Her Royal Highness”.  I wonder what her daughters made of that….But George III was unforgiving and never allowed Maria to be introduced at Court.

To end with, the Sir Joshua Reynolds portrait of the three sisters -” The Ladies Waldegrave” painted in 1780, and shown courtesy of the Scottish National Gallery. Haughty is the word which springs to mind. Accomplished at embroidery and tapestry work, yes, but certainly with an air of knowing their own importance and worth! Love the frocks though…. 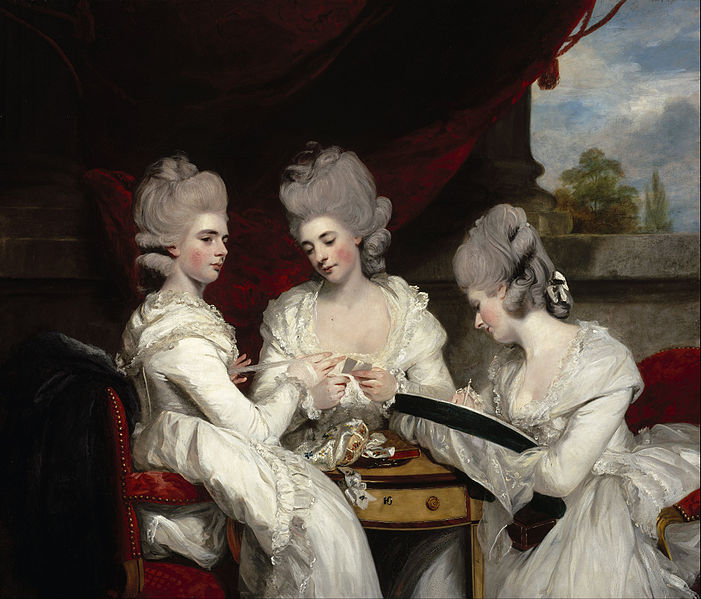 (Post script: I am grateful to Rachel Knowles for gently pointing out my mistake in the blog, as originally  published. I got the wrong wife  for the second Earl, confusing him with the first Earl… my excuse is that they were such an inter-married family it is hard to remember who was who!) Thanks, Rachel.