A few weeks ago I received an e-mail from Naomi Heap, who lives in Auckland, asking if my ancestor Richard Hall had written in his diaries about meeting Samuel Johnson. No, not THAT Samuel Johnson, but an ancestor of hers by the same name and who is generally described as being ‘a dancing master from Cheshire’. I have sympathy for Naomi having an ancestor with a name usurped by someone or something more famous. After all, my family name is ‘Hall’ and googling  a search for my dear old uncle Albert – ie Albert Hall – reveals pages and pages about some hideous Victorian monstrosity in London, and nothing at all about my forebear! (Memo to self: tell Google that they have their priorities all wrong….).

I confessed to Naomi that Richard Hall had never mentioned her ancestor – which was not surprising given that ‘her’ Samuel Johnson was born in 1691 and Samuel’s main claim to fame was a play performed in London in 1729 (the year Richard was born). The play was called Hurlothrumbo and appears to have been a completely over-the-top  production of nonsense, parodies, skits and jokes. 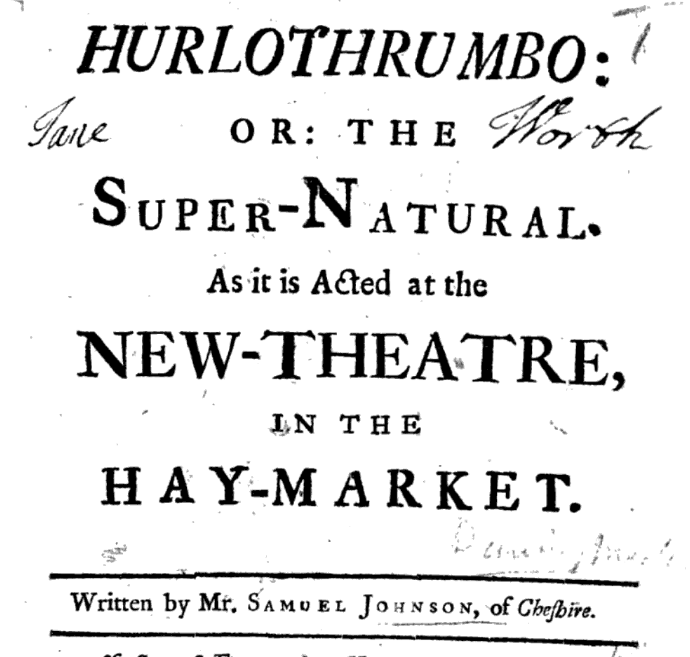 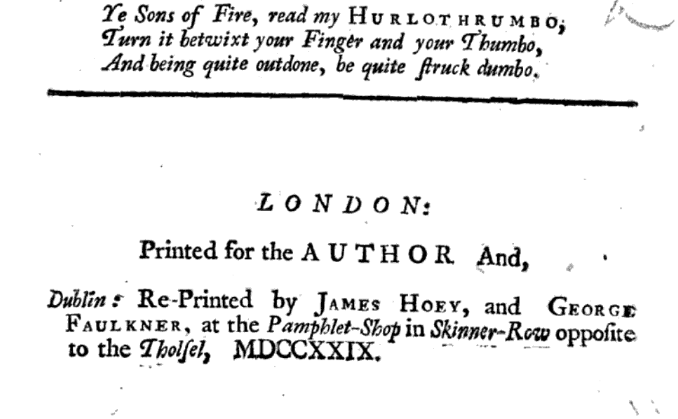 I was intrigued by Naomi’s story, because it seems to me that the world has room for more than one Samuel Johnson, particularly for one who was quite an odd-ball. Here was a dancing master-cum-jester working itinerantly in England, who wrote his play circa 1720, performed parts of it to various friends over the following 9 years, and eventually had it accepted at the Haymarket Theatre. The opening night was the 28th of March  1729. All of his friends attended and apparently pledged themselves to applaud the play from beginning to end. This went on for more than thirty performances and attracted full houses. The play was attended by people of fashion, and included the Duke of Montagu, who may have come up with the original idea of a piece of theatrical whimsy which parodied prevailing tastes, particularly for the performance of tragedies.

John Byrom’s Literary Remains records that on the 2nd of April 1729 Mr Johnson was the chief talk of London and that in Dick’s coffee house the day after the opening night and the play was all everyone was talking about, “it was Hurlothrumbo from one end to the other”. When Samuel arrived, everyone crowded round him “like so many bees”.  There may even have been royal patronage as Byrom states that “the Prince has been told of it and will come to see it” although he goes on to say that he planned to  work with Samuel to remove some of the passages that were unfit for the ladies so that they could see it.

The play is reported as having been totally surreal: a later commentator wrote ‘A more curious or a more insane production has seldom issued from human pen.’ Central to the performance was Johnson himself, wandering around the stage, playing the part of Lord Flame, often on stilts, while fiddling away on his violin. He danced and fiddled away throwing out nonsense verse, leading one commentator to say “Hurlothrumbo is a farrago of nonsense, hardly relieved by one or two good burlesque touches and by approaches to wit…”

There is a reference to Hurlothrumbo in Henry Fielding’s Tom Jones: “Thus the famous author of Hurlothrumbo told a learned bishop, that the reason his lordship could not taste the excellence of his piece was, that he did not read it with a fiddle in his hand; which instrument he himself had always had in his own, when he composed it.”

Despite its obscure and whimsical nature – or perhaps because of it  – the play appears to have gained something of a cult following, and Johnson stayed on in London and apparently composed a number of other plays in a similar vein, including ‘The Blazing Comet’ and ‘A vision of Heaven’. Perhaps it is as well that no printed record of many of his other plays remain! At some stage Johnson went back to Manchester to revive his teaching career as a dance instructor – apparently taking grave offence from a particular lady who declined to accept his offer of tuition.

In 1743 aged 52 Johnson retired to the village of Gawsworth, near Macclesfield, where he lived at Gawsworth Old Hall for thirty years. The house was allowed to him by two successive generations of Lord Harrington’s. He was known as ‘Maggoty’ (meaning whimsical) or ’Fiddler’ Johnson. He also kept the stage name ‘Lord Flame’. He died on the 3rd of May in 1773 at a house called the New Gawsworth Hall, and  he is interred in a small wood in the neighbourhood and his ghost was said to have ‘long haunted the spot’. All this earned him an entry in volume 30 of the Dictionary of National Biography published between 1885 and 1900.

A bit more about Samuel is to be found on the website of a group called Maggoty – a six piece ceilidh band operating in the Manchester/North West area. To quote from their website: ‘His grave, a grade II listed ashlar brick tomb standing in a beech wood, can still be seen today. The final resting place of Samuel, nicknamed Maggoty Johnson, is unusual in that it is not in a graveyard or other consecrated ground, and there are two memorial stones with alternative inscriptions. He was initially buried at St James’s Church; the parish record shows his burial on the fifth of May. However family members arranged for him to be moved to un-consecrated ground in line with his own request, unusual in a country where most were buried in a churchyard. Transcriptions of the grave inscriptions are displayed on plaques near the grave. The first inscription is joyful and was probably dictated by Johnson himself. The second” [placed there three generations later by The Countess of Harrington, Maria Stanhope née Foote – apparent descendent of British dramatist Samuel Foote] “in more righteous less joyful times, scorns the first’s mocking of Judgement Day. 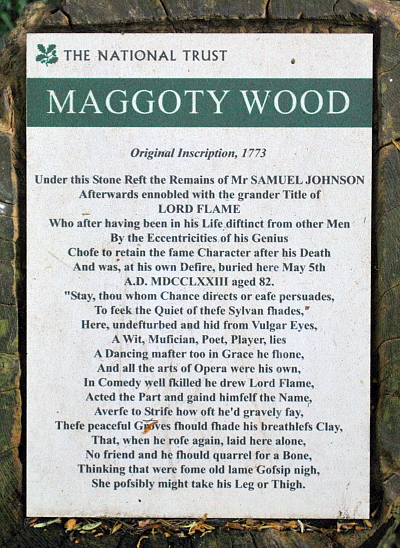 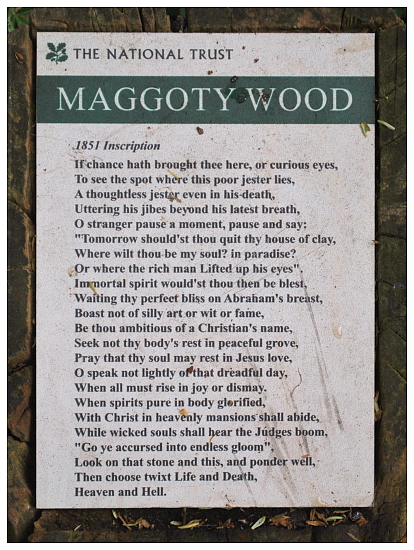 The second inscription, both shown courtesy of the National Trust

“Samuel ‘Maggoty’ Johnson, alias ‘Lord Flame’, was a poet and musician of considerable talent. He appears to have been one of England’s last professional jesters, employed by the Lord of Gawsworth, but available for hire to the local gentry where, because of his sharp wit and endearing repartee, he was invariably allowed free license”.

Many thanks to Naomi for drawing this man to my attention. In my next blog Naomi will explain what else her ancestor is remembered for – a collection of bon mots collected from public conveniences in the first half of the eighteenth century!