Writing some years after the event, my ancestor recorded in his journal the purchase of various items of mahogany furniture, including this one for a chair. He does not specify a maker, but it is quite likely that the design would have been influenced by Chippendale.

There were in fact two Thomas Chippendales, father and son. The elder Thomas was a Yorkshireman, born in Otley in 1718 to a family with a long wood-working and timber trade tradition. After a probable spell working in York and then as a journeyman carpenter he moved to London and in 1748 he married Catherine Redshaw. They went on to have five boys and four girls, living first in rented accommodation near Covent Garden and then at Somerset Court off the Strand. In 1754 he moved to fashionable premises at 60-62 St Martin’s Lane and the business remained there for sixty years.

A Chippendale style chair, circa 1780

At the same time he took a wealthy Scottish businessman called James Rannie into partnership, enabling him to concentrate on his masterpiece The Gentleman and Cabinet Maker’s Director. It contained 161 engraved plates of “elegant and useful designs of Household Furniture in the Gothic Chinese and Modern Taste.” It was a sell-out success, as was the second edition in the following year. A third edition, with additional illustrations came out in 1762. The Director is important because it was the first time a publication had appeared listing designs for others to copy, and because of the success the Chippendale name has been synonymous with the rococo style. It does not mean that all the pieces of ‘Chippendale’ were made by him, although it is true that he employed some fifty in-house carpenters and any number of outworkers. His role was as artistic director, dealing with wealthy clients and supervising the workforce. Ideally he preferred to be given a commission to design the furniture for a grand house, from top to bottom, (such as at Harewood House, situated between Leeds and Harrogate) but he also sold ‘off the peg’ items from the London premises to the passing trade.

His partner James Rannie died in 1766 but his share in the business was sold to their accountant Thomas Haig and for a time the business was known as Chippendale Haig & Co. With passing years Thomas the elder Chippendale had less to do with the business – he remarried in 1776 and had two more children, and by then his role had passed to Thomas Chippendale junior. The old boy had moved to Hoxton and died there of tuberculosis on 13 November 1778. He was buried at St Martin-in-the-Fields in London and various memorials have been erected in his memory including a statue in his home town of Otley and another outside the Victoria & Albert Museum in London. 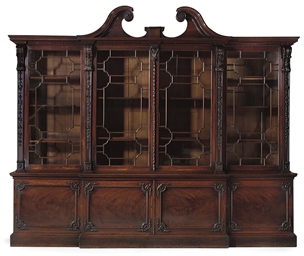 A Chippendale break-fronted bookcase from 1764,  courtesy of Christies.

This left the younger Thomas to soldier on until 1803. It must have been a difficult time for Thomas junior because Haig was the senior partner. When Haig died that year there were insufficient funds to pay his legacies and Thomas was forced to liquidate his assets and was declared bankrupt in 1804. He finally quit the St Martin’s Lane premises in 1813 and died in 1822.

One Response to “Thomas Chippendale – the daddy of furniture design – died 13 November 1779.”