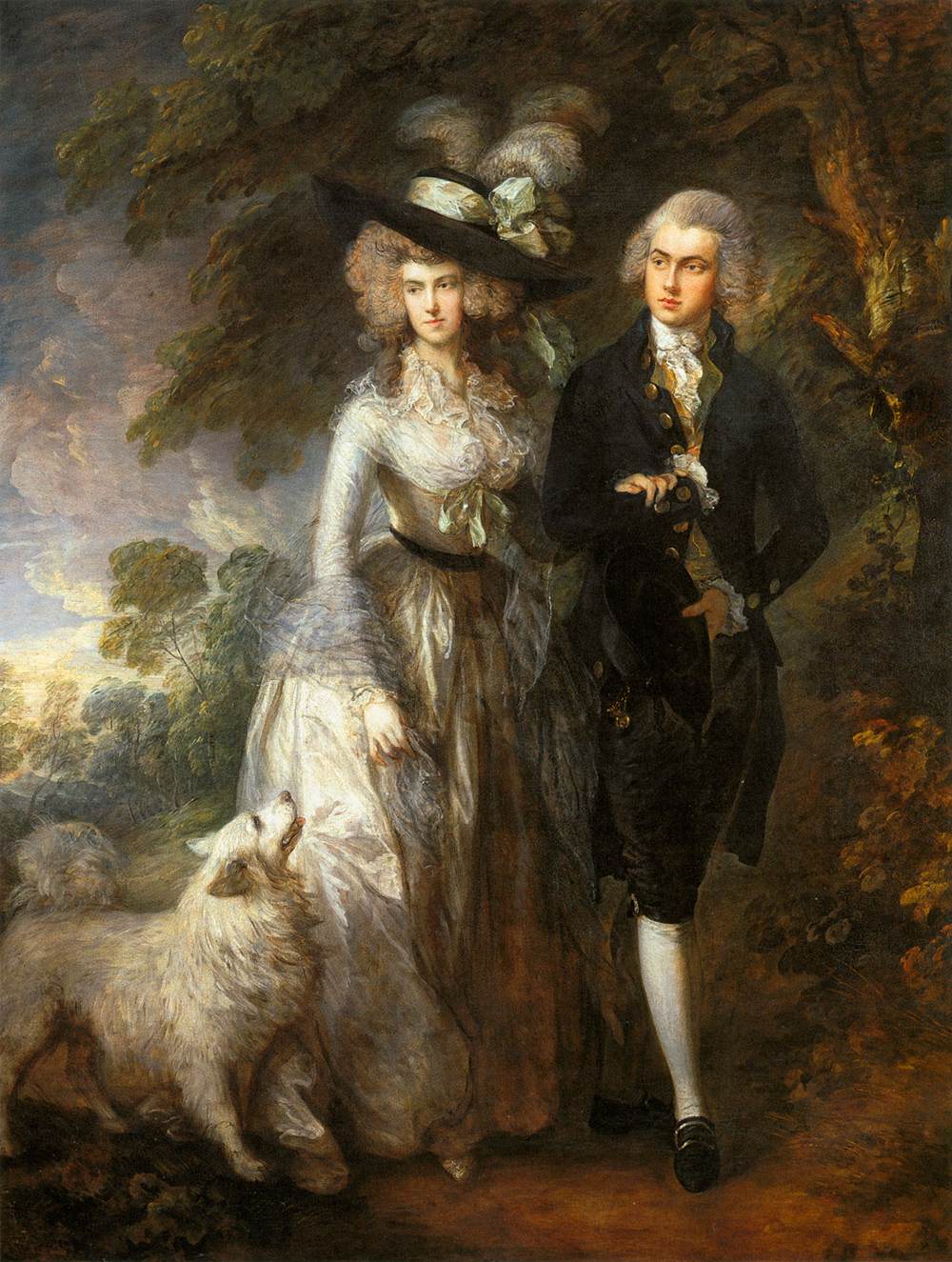 Sad to see that some nutter with a screw-driver has slashed the canvas painted by Thomas Gainsborough in 1785, generally known as ‘The Morning Walk’. The other title is ‘Mr and Mrs Hallett’ – slightly inaccurately, as the couple had not, at the time of the painting, celebrated their nuptials. The National Gallery describe the painting as representing  “an elegant young couple strolling through a woodland landscape, an attentive dog at the lady’s heel. William Hallett and Elizabeth Stephen were … due to be married in the summer of 1785, shortly after the painting was completed.”

The site continues “William is in a black, silk velvet frock-suit. His apparent carelessness is actually a studied pose. The undone jacket and with one hand tucked into it is a stance seen in many fashionable 18th-centry informal portraits (known as conversation pieces).

If the report in the Daily Mail is anything to go by, the portrait is famous because it features in the background to the scene in Skyfall, where  James Bond, played by Daniel Craig, sits on a bench in Room 34 at the National Gallery. Funny that, I always thought that it had been famous for  many years before James Bond came along…

Anyway, as a fan of Gainsborough I am saddened to see that the painting has been damaged and hope it will not be long before the necessary repairs can be effected. The painting has had a fairly chequered history – it was bought by Sir N M Rothschild (later Lord Rothschild) in 1884. A subsequent Lord Rothschild then flogged it to the National Gallery in 1954  for the sum of £30,000 with the purchase being aided by a grant from the Art Fund. Nowadays I imagine that it is worth many millions…..

I have always liked the painting, and can do no better than repeat the description on a site known as the Web Gallery of Art:  ” It was surely Gainsborough’s inclination to interpret a formal marriage portrait, for which the sitters probably sat separately, as a parkland promenade. William Hallett was 21 and his wife Elizabeth, née Stephen, 20 when they solemnly linked arms to walk in step together through life. A Spitz dog paces at their side, right foot forward like theirs, as pale and fluffy as Mrs Hallet is pale and gauzy. Being only a dog with no sense of occasion he pants joyfully hoping for attention. The parkland is a painted backdrop, like those of Victorian photographers, yet it provides a pretext for depicting urban sitters in urban finery as if in the dappled light of a world fresh with dew. ”