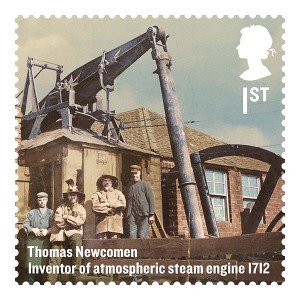 In February this year the Royal Mail brought out a series of stamps under the heading of “Britons of Distinction” and one of the stamps, for use with first class post, honours the installation by Thomas Newcomen of his first working steam engine. It was installed at a coalmine near Dudley Castle in Staffordshire in 1712

So, what of Thomas the Man? He was Dartmouth-born (probably around 24th February 1663) and lived until 5th August 1729. In other words he died when my ancestor Richard Hall was just a few months old. The link to Richard is that Newcomen is buried in Bunhill Burial Grounds – as are Richard Hall´s father, mother and step-mother. In addition Newcomen, like Hall, was a devout Baptist and like Richard, a close friend of Dr Gill the great Baptist theologian.

The young Thomas Newcomen was in all likelihood apprenticed as a blacksmith in Dartmouth, Devon, where he made tools, nails and other iron goods for sale in the Dartmouth area. As a local he would have been aware of the flooding problems faced by tin and coal mine owners in the counties of Devon and Cornwall and he determined to do something about it. Little is known of his early experiments and almost certainly he borrowed heavily from the ideas of Savery (to the extent of never patenting his own works, yet paying a licence fee to Savery´s estate for working under his patent). 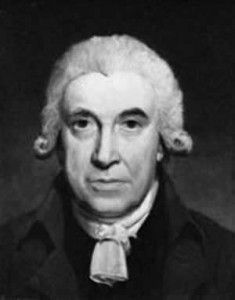 But that is not to say that his developments were not crucial in making the his steam powered beam engine an effective means of lifting water from flooded mines. Around seventyfive of his machines were installed in his lfetime, but over the ensuing half century hundreds more were installed, the length and breadth of England and in many places in Europe. His machines were never particularly efficient – later modifications and improvements by James Watt and others made a huge difference to the performance of the pumps, but it was at least a start, and a very significant one.

The tri-centennial celebrations include refurbishing works in Dartmouth to the Newcomen Engine House – one of the few places in the country where there is still an original Newcomen engine to be seen. The town is also launching a new beer – the Newcomen Atmospheric Ale.

So three centuries on from what was a very significant step in the birth of the Industrial Revolution: a toast to Thomas Newcomen, one of Devon´s finest!

3 Responses to “Three centuries on: the installation of the first Thomas Newcomen steam engine”