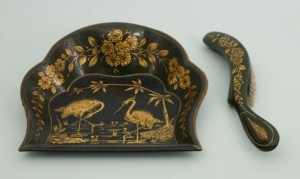 I recently gave a talk on decorated furniture in the Eighteenth Century and until I did my research for it had not appreciated the popularity and importance of papier-mâché throughout that period. Nor did I appreciate how closely the process was linked to the fortunes of Midlands towns, particularly Birmingham and Wolverhampton.

In the middle decades of the Eighteenth Century papier-mâché started to be widely used in decorative finishes ( e.g. to make moldings for picture frames, to build up decorative “knobs” on chair legs, and by designers such as Robert Adam with his decoratively molded fireplaces, mirror surrounds etc.).

In 1740 John Baskerville had opened a japanned tin-ware factory in Birmingham. Almost certainly it was tinware which Richard Hall was referring to when he describes buying ‘a japan’d kitchen’ – by which he probably meant a matching set of containers, with a tray. Later, Baskerville  started experimenting with paper rather than tin as a base. 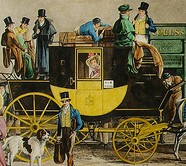 The process of using pulped paper received a huge boost in 1772 when Henry Clay, a Birmingham business man who had quite possibly been apprenticed to John Baskerville, patented a method of pasting paper in sheets, leaving them to be stoved, oiled with linseed oil, shaped, worked and later decorated and varnished. It was used in a huge array of products – from decorative side panels in carriages, through to small items of furniture, boxes etc. It had the advantage of being light weight and the total lack of graining made it far superior to wood when it came to applying an even layer of decoration.

The process began in the molding room where women (and young girls) would lay the wet paper sheets on strips over a copper or tinned metal mould. This was then baked to 100°F and once the required thickness had been built up, the moulded shape was oiled (making it water proof and more durable) and then baked again to 260°F. 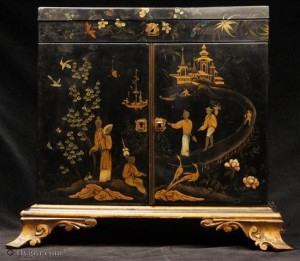 The item was then removed to the making up shop where the item could be planed, drilled, turned and assembled by skilled cabinet makers. The product was then ready to be finished – a layer of tar varnish would be added, then it was baked again, then a further thin layer of varnish added, and so on. Children were often used in ‘sweat shop’ conditions for this final stage of the process and the heat and filth in these finishing rooms is hard to imagine. Soot was used to blacken the product, which for a really lustrous finish would have multi-layers of varnish added once the decoration was applied.

The original varnishing process had come from China and the Far East (hence the process became known as japanning) and was amazingly popular. Long case clock cabinets, chests of drawers, tables, and particularly cabinets and display chests were made of papier-mâché and then japanned.

There were problems with the early lacquers brought from the Far East and which were difficult to use: they were highly toxic, and they did not react well to extreme heat (meaning that the object often cracked in the stoving process. A prize of £20 (later increased to £60) was offered by the Society of Arts to the first person to come up with a practical alternative. Step forward Brummie Stephen Bedford who produced a copal varnish in 1763. In effect this is a softer form of amber – semi hardened tree resin.

Combining these developments together meant a huge boom in Midland towns such as Birmingham, Bilston and Wolverhampton, a boom which was to last until the second half of the next century.

I am indebted to Made in the Black Country for some of the information contained in this post, and for the picture of the crumb brush and tray, and to Jane Toller’s book Papier Mache in Great Britain and America. I also love the splendid papier mache cabinet shown above, which appears on the website iof the most helpful Antique Boxes at the Sign of the Hygra

2 Responses to “Tin-ware or papier-mâché? No matter, as long as it is japanned.”