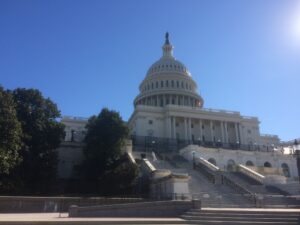 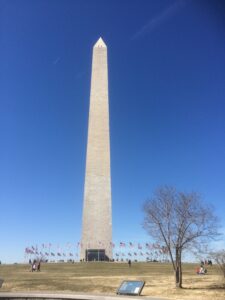 This week I visited Washington, for the first time. Just my luck to find that everything was closed for President’s Day the first day after I arrived. But unlike British Bank Holidays, when it always rains, the Americans seem to have managed to train their weather so that it was a glorious day. Mind you, it was made up by the rest of the week when it was dismally cold and damp, but hey, one magnificent day is worth suffering for a little time afterwards! 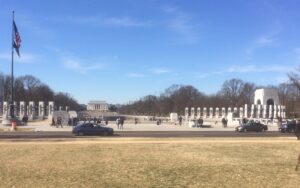 Not having been to the city before, I had pictures in my mind’s eye – of the Capitol building under siege from rioters, of the Lincoln Memorial and the crowds lining the waterway listening to the “I had a dream” speech, of the Presidential helicopter landing on the White House Lawn – but I had no idea how the  buildings all connected. It was fascinating to amble along the entire stretch of the National Mall – a big, almost traffic free, area leading from the empty Capitol Building, resplendent in gleaming white and looking like a wedding cake, down past the various Smithsonian Museums, to the Washington Memorial and on to the World War II memorial (which I found rather moving and poignant) and on to the Lincoln Memorial. 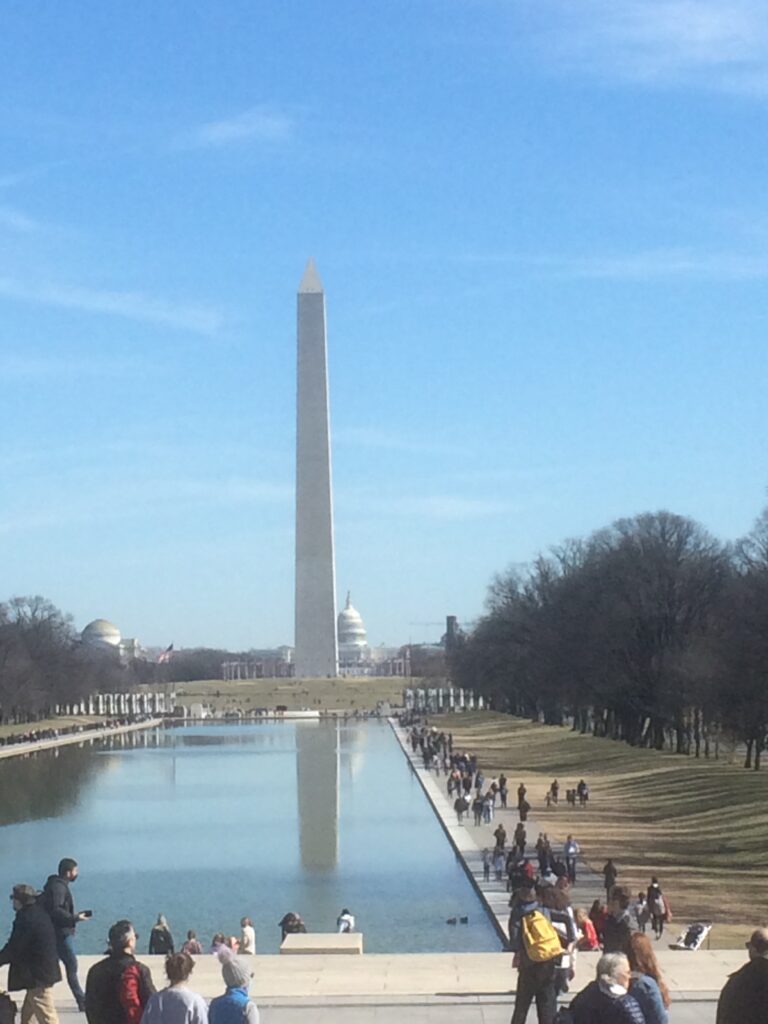 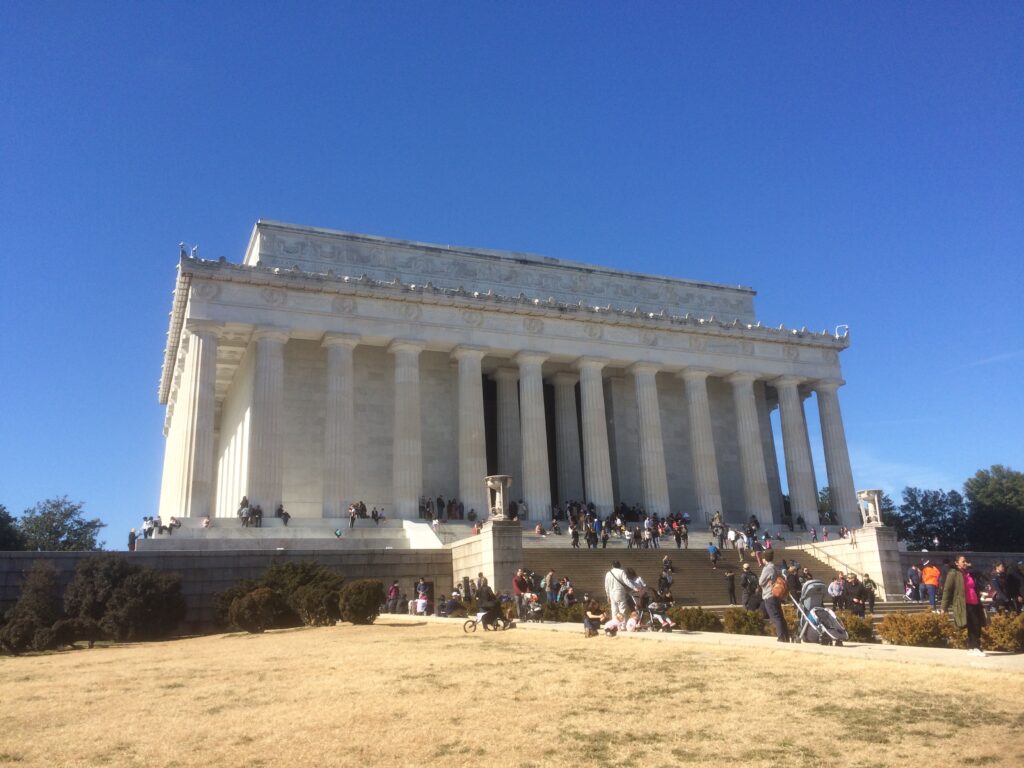 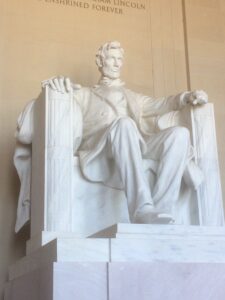 I had vaguely thought that there was ONE Smithsonian, not appreciating that this is the umbrella title for a whole collection of very separate buildings – one devoted to Air Travel and Space, one to the history of the Native Americans, one to the story of African Americans, another to Natural History, another to modern sculpture and Art, and so on. We popped into some of the exhibitions – all free of course. 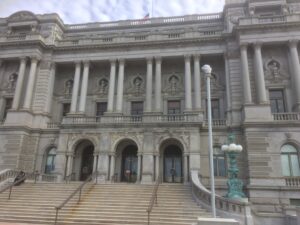 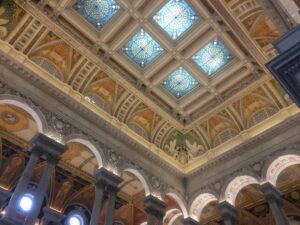 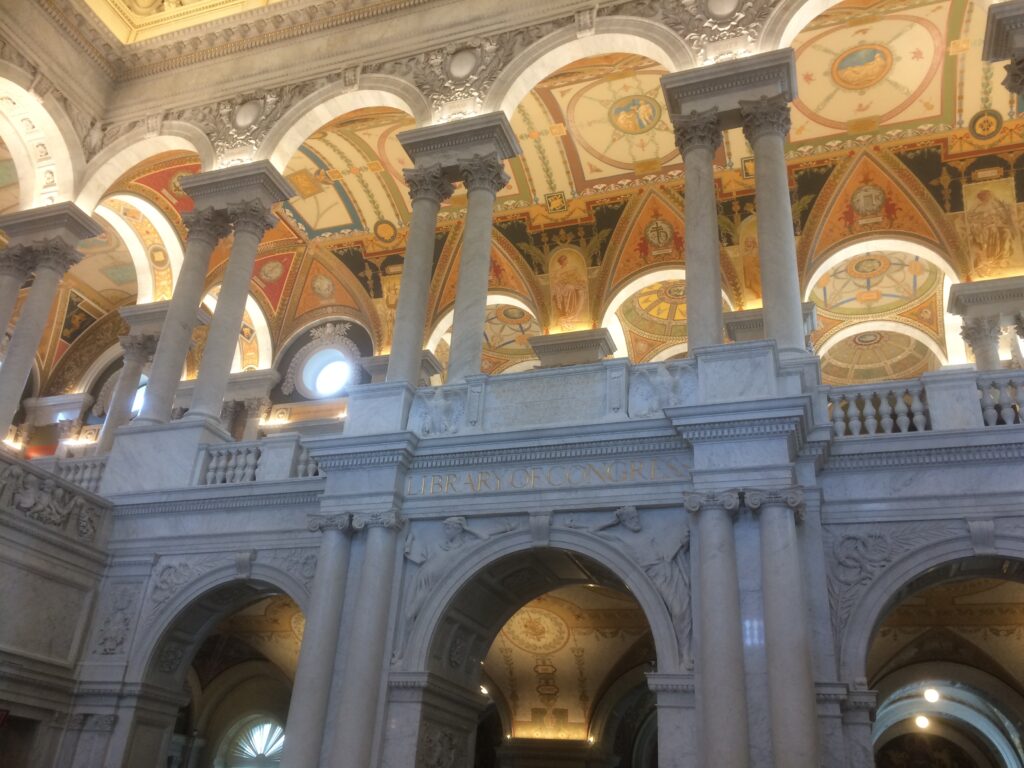 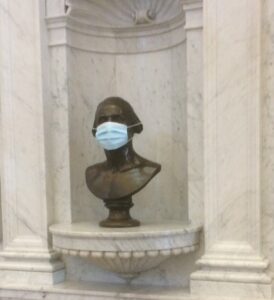 But the highlight, as far as I was concerned, was the chance to see the Library of Congress, situated behind the Capitol Building in a most impressive edifice. You need to book a timed entrance ticket online the day before visiting but it is well worth the hassle. What do you expect in a library – especially one claiming to have the biggest collection in the world. Books? Well, there aren’t any on view in the main part of the building, apart from a small collection showing the books belonging to Thomas Jefferson. He apparently gave his entire library to the American people after the Brits burned down the original collection, when we  attacked Washington and set fire to the White House 200 years ago.

What you see, instead of books, is a magnificent marble edifice, richly decorated in the Beaux Arts style, but very much trumpeting American superiority. The statuettes carry not candles, but electric lights (a US invention) while the cupids speak into an early telephone (claimed by the Americans because it was first trialed in  the US). There are impressive mosaic statues, fabulously decorated ceilings – and then you get a peep into the magnificent Reading Room.

Even this hall of learning is not where most of the books are kept. If you sell books in the States and want your writing to have the benefit of copyright you have to donate two copies, one of which will be stored in one of the gigantic warehouses which are located near the main LoC building. These are protected from fire, not by water sprinklers, but by inert gases. Interestingly the books are not stored by year, or author or subject matter – they are stored by … size. 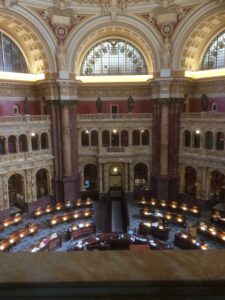 To get the very maximum of books into the shelving, all the books are measured and put onto the shelf of the appropriate size. God help the curators if  the guy with the bar code machine gets his records muddled – you would never be able to find anything. Anyway, nice to think that tucked away in the vaults will be a number of my books, all courtesy of Pen & Sword. 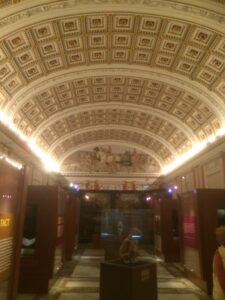 Getting back to the main LoC building: what really made it interesting were the guides – who were able to give a fascinating account of anything and everything to do with the building. There were dozens of them scattered in the entrance foyer, on the stairs – everywhere you looked. The building is one which Americans are immensely proud of – and why not? 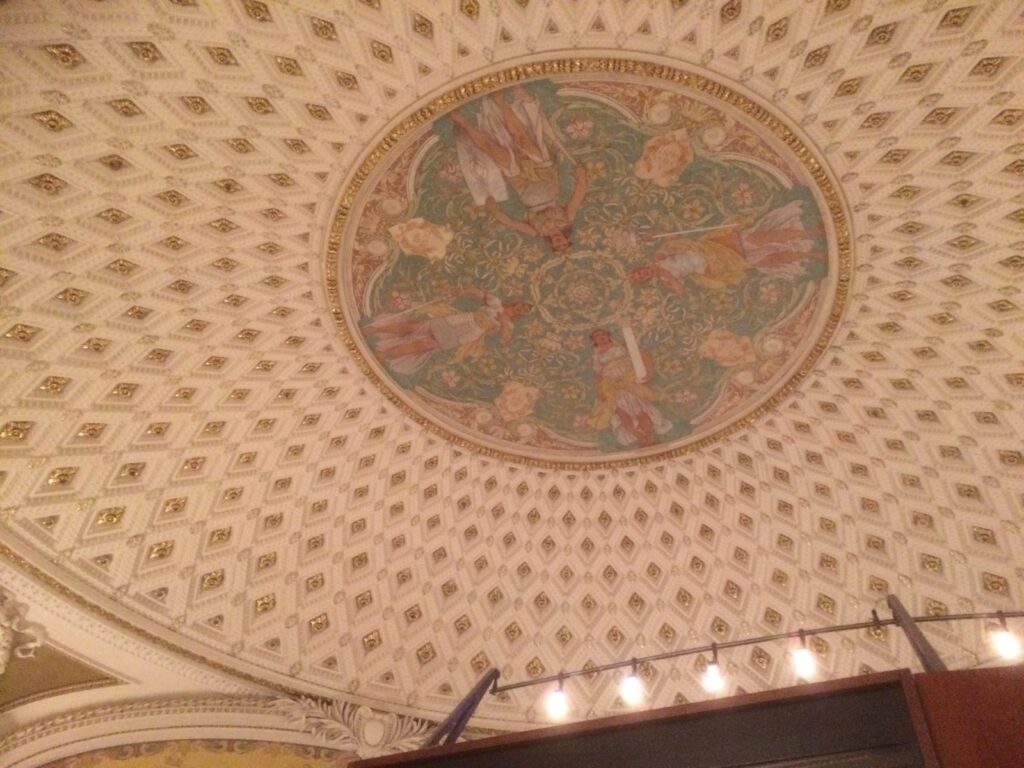 My interest in the LoC  arose originally because they acquired part of the  royal collection of 18th Century etchings and prints. George V decided that the caricatures etc, many of them lewd and politically incorrect, had no place in the royal collection and flogged the lot to the States. I think that this was some time back in the Twenties. Their gain is our loss, and I have featured many of the LoC prints at various times in my books. No, they weren’t available to view on this particular occasion – I would have needed to apply well in advance, but it was really interesting to see where everything is stored. 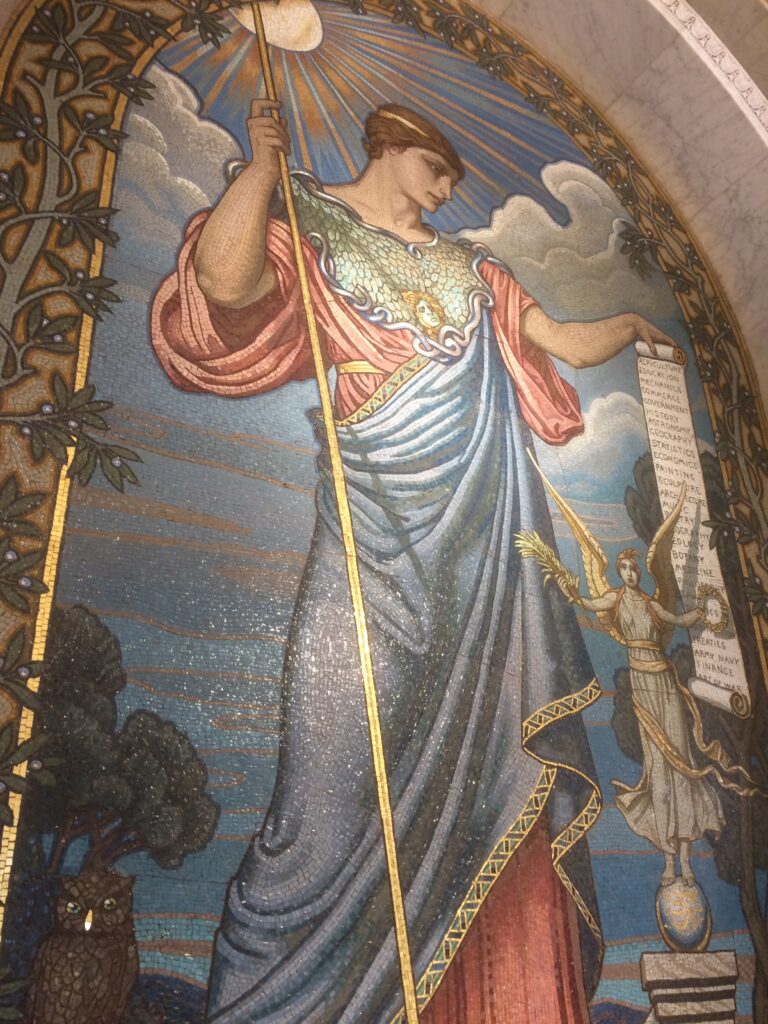 Statue of Minerva, in mosaics

I liked Washington. I couldn’t say I would want to spend weeks there, but it felt incredibly open and much of the central area is compact and ‘walkable’. We had a magnificent tapas dinner down on the Wharf – at least as good as anything I had in the twenty years I lived in Spain – plus an extraordinary meal in a Chinese Take-away recommended in the Lonely Planet Guide. They did say that the place had less atmosphere than the moon. Correct. They did say that the Peking Duck was sensational, and made up for everything. Correct. No matter that the rest if the food was pretty inedible, that duck was quite superb…