Travel in the Eighteenth Century

Richard Hall kept meticulous details of his travels around the country. He recorded the mileage, he recorded the length of journey and whether he had a meal, he recorded the route and the turnpike tolls, and he recorded the weather on the trip! And at the end of the journey he generally wrote in his diary that “through Journey’s Mercies” he had been spared to reach his destination!

The point is: travel was still something of an ordeal in the 1780’s. It would take him two days to get from the Cotswolds, where he lived, to central London, where he had his business. Two days of rattling, bone-shaking discomfort, sitting cheek-by-jowl with people he probably would have preferred not to have been sitting next to!

Here is his separate note-book of distances, includ 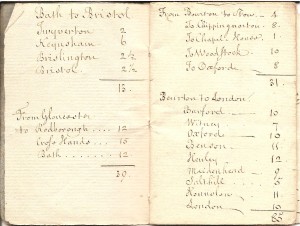 ing the 13 mile trip from Bath to Bristol, and  the 85 mile trip from Bourton-on-the-Water to London. On another page he recorded that the  journey back from London cost him £5/2/00 ( the equivalent of some £400). Why? Because he came back by private chaise. The hire of the chaises came to £4/3/08; he paid eleven shillings to the drivers; six shillings and fourpence for turnpike tolls; and a not very generous one shilling to the “hostler” (ie the ostler – the man who looked after the horses).

He would have followed his route on one of the splendid linear maps printed by Bowles and Co – this is one showing the journey between Banbury and Bristol. 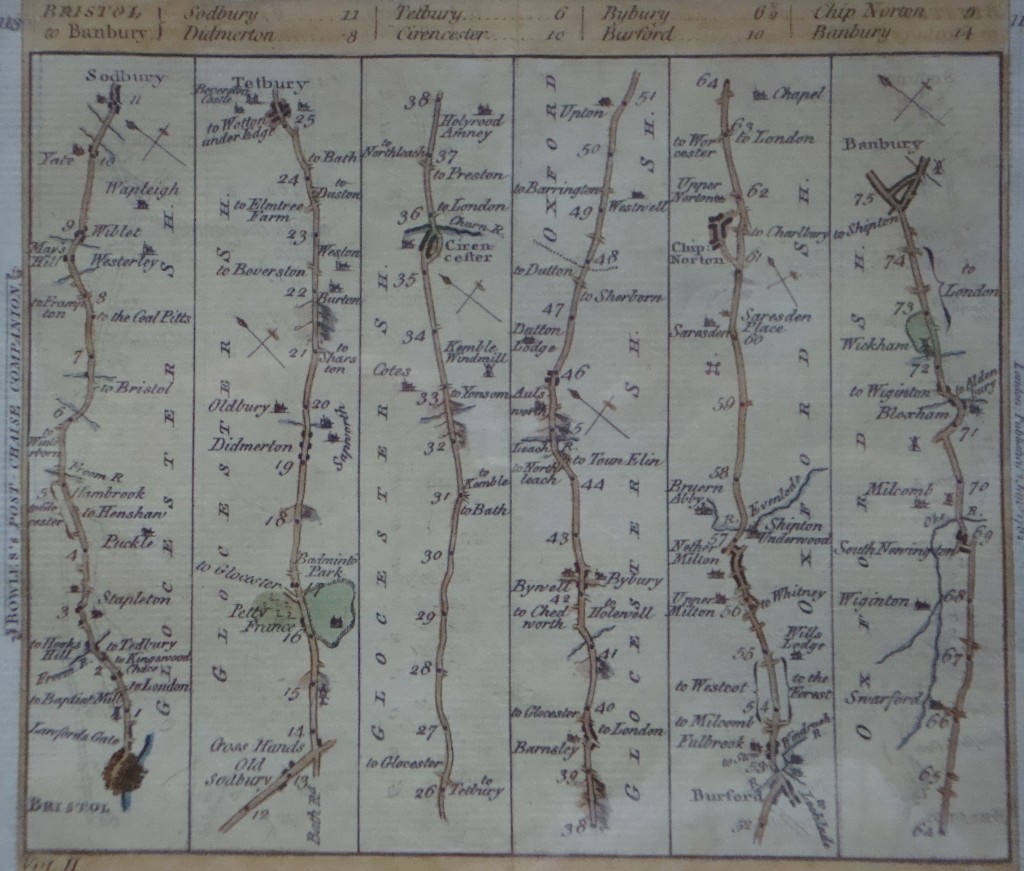 Unfortunately I do not have the diary recording Richard’s trip to Paris with his new bride, from thirty years earlier. A shame – I have his guide book dated 1750 which gives fascinating detail of which  vessels to charter for  your crossing to Calais, how to hire a coach in France, and so on. It includes the warning that you should always have with you “a small collation of Cold Meat, and two or three Bottles of Wine to serve you in the passage” ie across the Channel. You should especially take care to ensure that the plumbing on your trunk (ie the lead seal affixed by the Customs Officer) should not be broken. It was best to hire a French guide – but he would be too proud to carry any of your luggage (“nothing larger than a small hand-basket”) so you would have to pay ten pence per item (“one livre”) to a surly French porter. 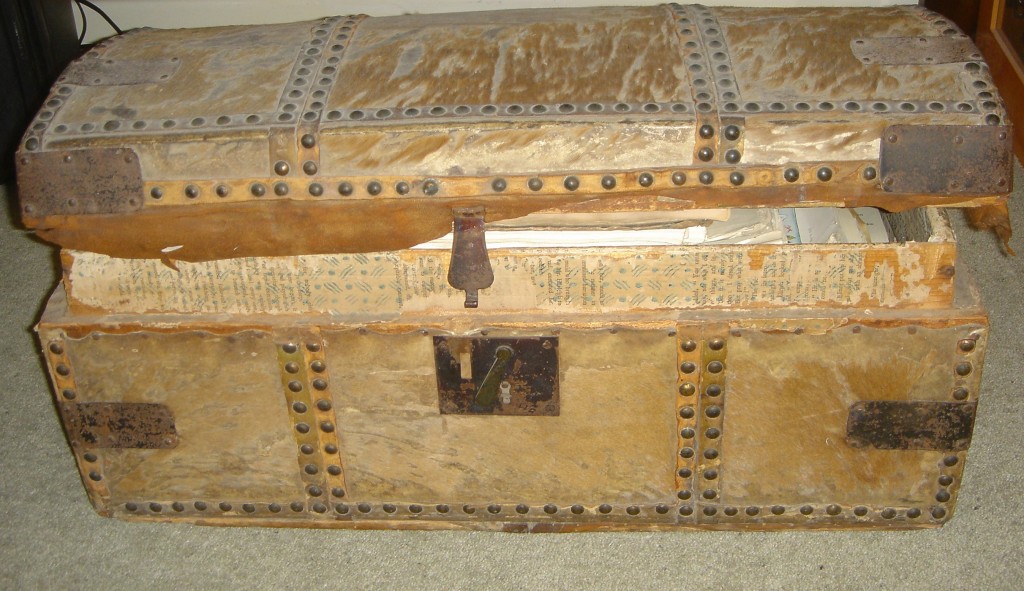 The  guide advises you that the French will try and rip you off at every turn, and is particularly scathing about French horses (“one, sometimes two, of the three horses are not  much bigger or stronger than a large Greyhound”). Making sure that the trunks are tied down properly was vital – so that they did not go walkies when you stopped. The guide warns “a good deal of strong cordage will be wanted to fasten your Trunks behind the Chaise… for you’ll else be made to pay a price for it there and then which will make you amazed, perhaps five or six livres for what will cord on a Couple of middling trunks.”

The guide sets out some vital information. For instance, the Bulls Head at Abbe Ville had good champagne, and even better, the stop at Luzarche involved “Good things – and a handsome Landlady.” Stay at Amiens and you could get both the good champagne AND a merry Landlady – though no mention of whether she was handsome. Well, even in those days, perhaps you couldn’t have everything….

Mind you, it was important to avoid being robbed  while passing through France. As Horace Walpole wrote to the Honourable  Henry Seymour Conway on 28 September 1774:
” Let me give you one other caution …. Take care of your papers at Paris, and have a very strong lock to your porte-feuille. In the h`otels garnis they have double keys to every lock, and examine every drawer and paper of the English they can get at. They will pilfer, too, whatever they can. I was robbed of half my clothes there the first time, and they wanted to hang poor Louis to save the people of the house who had stolen the things.”   Tut-tut, such bigotry! But then,  the French were as bad about us: they generally opined that you could not walk down any street in London without having your pocket picked and your watch stolen…

More about  travel, and what Richard  packed, and the perils of eating French food, can be found in “The Journal of a Georgian Gentleman”.

4 thoughts on “Travel in the Eighteenth Century”