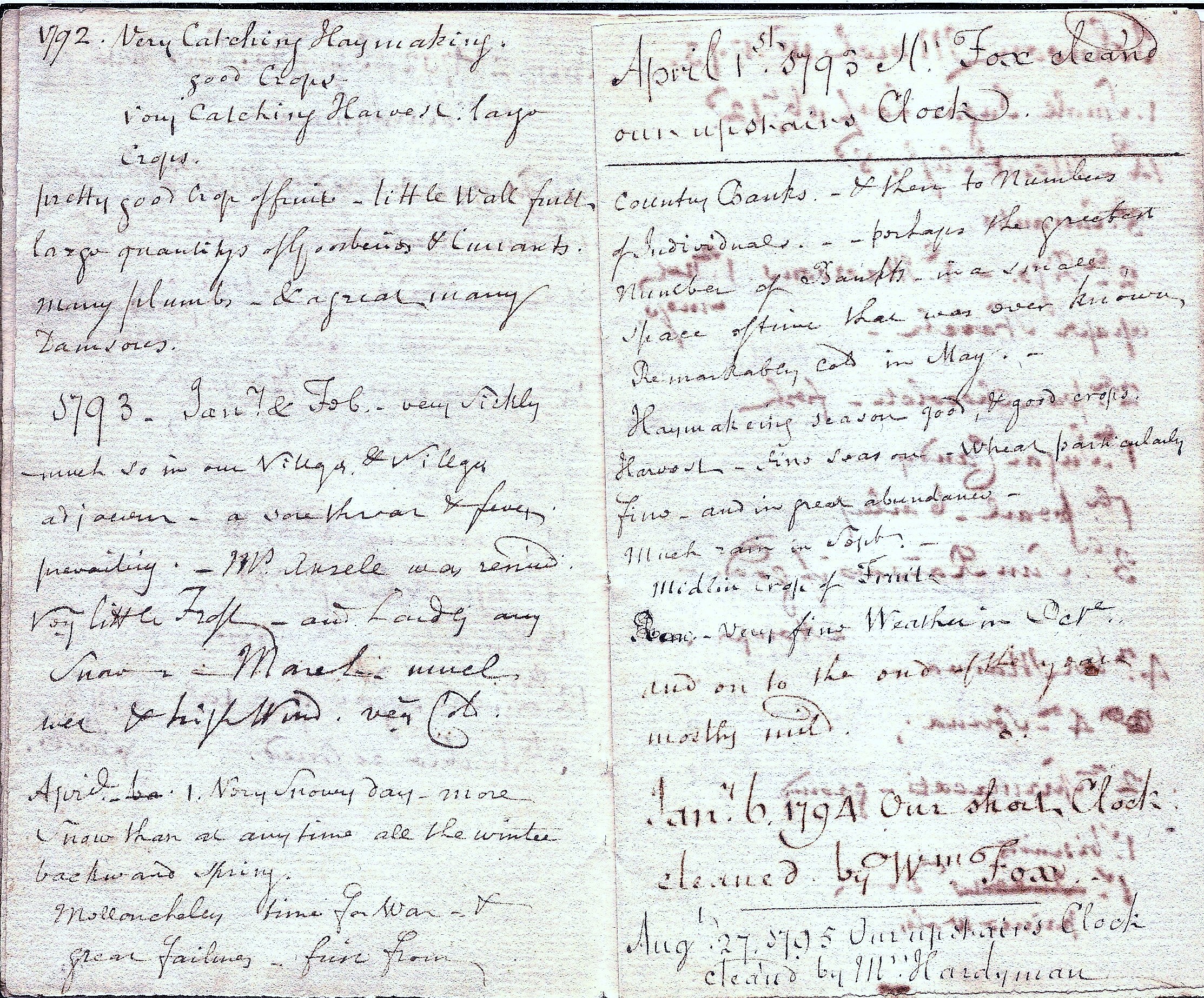 My ancestor was a real worrier – and the older he got the more he worried – and the more he filled his diaries with notes about what concerned him. Those concerns spilled out into his collection of day books and informal jottings – and here is one example.

It starts off with the comment that 1792 saw “very catching Haymaking  – good crops”. This was followed up with the words “Very Catching Harvest – large crops”. He saw a pretty good crop of fruits – “little Wall fruit, but large quantity of Gooseberries and Currants. Many plumbs and a great many damsons.” So far, so good (and I assume that ‘wall fruit’ are those grown espalier-style against a wall, such as apples, figs and peaches).

The next entry was made a year later: 1793 January and February it was “very sickly”  – particularly in the village where Richard Hall lived (Bourton on the Water) and the villages adjacent. A sore throat and fever prevailed. The seasons seemed ‘out of synch’ in the sense that there was very little frost and hardly any snow. Then in March it turned very cold, with high winds. Come April 1st  it was a very snowy day – more snow than at any time all winter long.

Richard saw it as a “melancholy time for War and great failures” – first from country banks and then to numbers of individuals. It was, he surmised, “perhaps the greatest number of bankruptcies in a short space of time that was ever known.”

May was remarkably cold, but the haymaking and harvest were good and then Richard appears to have cheered up – the wheat harvest was particularly good, there was a medium crop of fruit, and the weather turned warm in October and stayed mostly mild until the end of the year.

Punctuating these comments were the facts that on April 1st 1793 Mr Fox cleaned his upstairs clock, and came back on January 6th 1794 to clean the short clock (I assume that this was his bracket clock – unfortunately no longer in the family). He seems to have lost faith in William Fox and his ability to sort out his clocks, because that summer he resorted to having the upstairs clock cleaned by Mr Hardyman. Elsewhere he records that the cost of cleaning the clock was half a crown (2 shillings and sixpence). Mr Hardyman was certainly a handy fellow in the village – he also acted as barber! Richard remarks that on July 2nd 1792 he began to shave with My Hardyman – and in those days a shave was a probably a whole-of-head experience

The next page of his jottings was taken up with a couple of shopping lists – the things he needed to get from Mr Johnson’s shop. In case you wish to do your own deciphering of Richard’s scrawl – here it is: 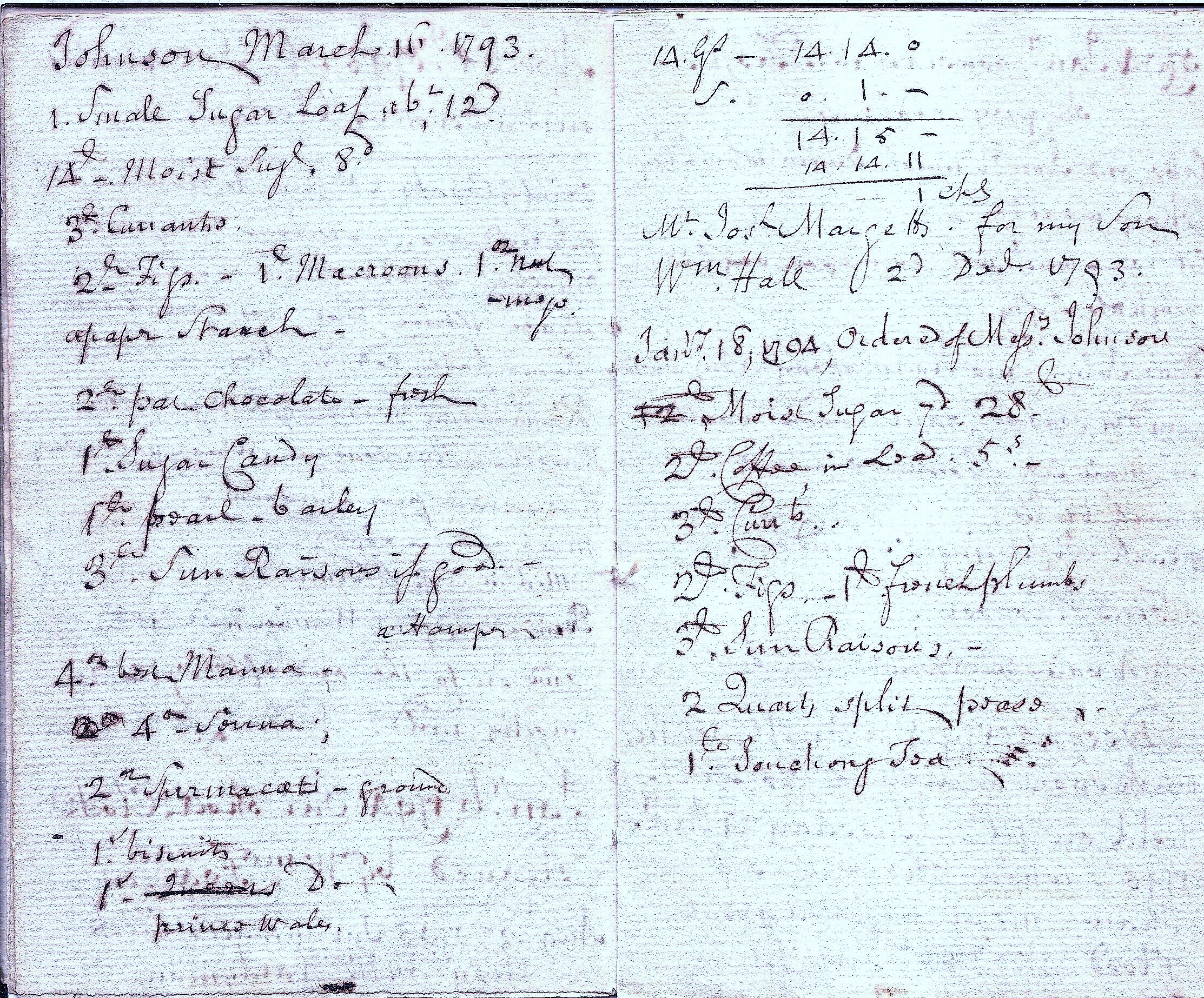 In subsequent years, as war with France dragged on, and the National Debt grew ever-larger, Richard’s jottings became even more troubled and haphazard, ending up with pages and pages of scrawl about the iniquity of Income Tax, about “the Irish Question” and about the sky-rocketing price of bread. As I said at the start, poor Richard, he was a worrier all the time!

One Response to “Worries a-plenty in 1793: from the state of the harvest to concerns about the war, sickness in the Spring and bankruptcies galore…”