The Colonial Williamsburg site contains an interesting example of ‘The Comical Hotch-Potch – or, the Alphabet Turn’d Posture-Master.’ 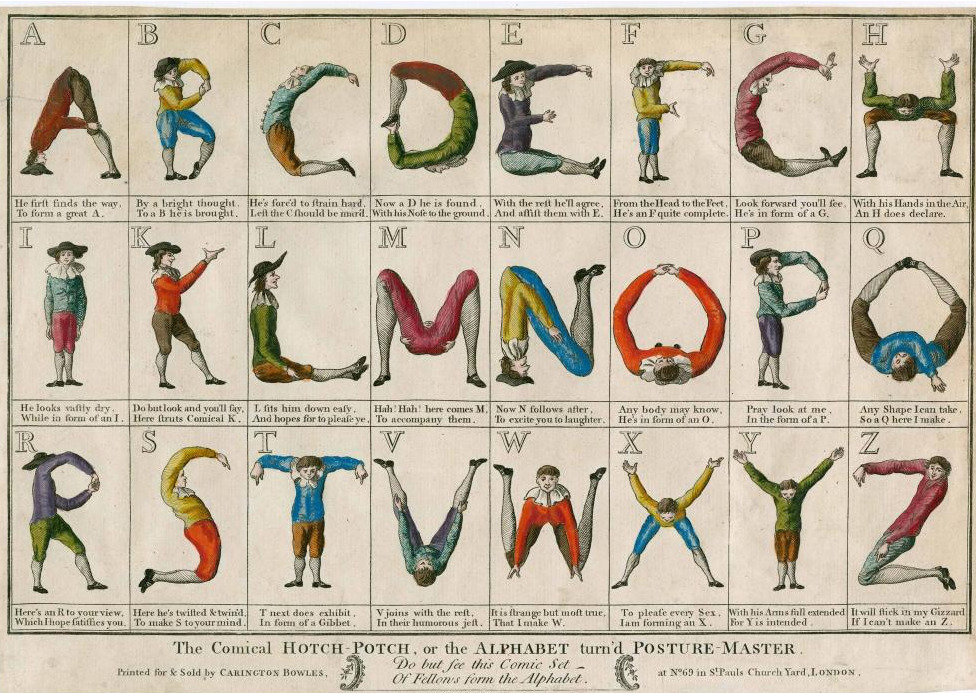 Some interesting detail about the print is given on the Jennie MacDonald site, which describes the alphabet as follows:

“On “The Comical Hotch-Potch” print, the twenty-four letters are illustrated by two images in each compartment: a small Roman type letter in the top left corner identifies the larger version of each letter formed by the contorted body of a boy or young man in the center of the compartment. The small letters are taken from Bowles’s standard Roman alphabet and rendered in outline form. Below each pair of letters two lines of verse occupy their own compartment, which adds three shallow rows of small type to the three visually commanding rows. Some of the verses demonstrate the use of the letter in a word, sometimes in several words, such as the one for the letter B: “By a bright thought / To a B he is brought.” Others indicate how to pronounce the letter without providing any examples of use, such as the one for the letter G: “Look forward you’ll see, / He’s in form of a G.” With their wide, ruffled clown-like collars; their mostly genial faces; and, in the colored version of the print, their brightly tinted jackets and trousers, the “letter-men (or boys),” to use Crain’s term (108), offer a jolly spectacle. Below the alphabet is the title “The Comical Hotch-Potch, or the Alphabet turn’d Posture-Master,” which is “Printed for & Sold by Carington Bowles, at No 69 in St. Pauls Church Yard, London.” The centered and italicized text tells the viewer what to do: “Do but see this Comic Set / Of Fellows form the Alphabet.” At the bottom of the sheet is the requisite notice, “Publish’d as the Act decrees 30 Sepr 1782.”

What I found intriguing was the omission of the two letters ‘J’ and ‘V’ – ‘ J’ because it was not considered independent of ‘I’ and ‘U’ because it was an adjunct of ‘V”. An added twist was that actually the ‘U’ is shown as a ‘V’ (i.e. with straight sides coming to a point). Arguments had raged for some time as to whether  ‘J’ and ‘V’ were letters in their own right – and even Dr Johnson was of the view that  there were only 24 letters in the alphabet. In his 1775 Dictionary  Johnson placed any word beginning with a ‘J’ under ‘I’ and with ‘V’ under ‘U’.  How uery iolly!

Strangely enough, Carington Bowles, who published the print in 1782, produced a slightly different illustrated alphabet a few years later – and this time he included a ‘V’ but omitted the ‘U’ – but the ‘J’ was still nowhere to be seen. It is definitely a ‘V’ in its own right – because the verse explains that ‘Valiant am I at V to try’.  It can be found on Wikimedia Commons and is entitled “The Man of Letters or Pierrot’s Alphabet’. 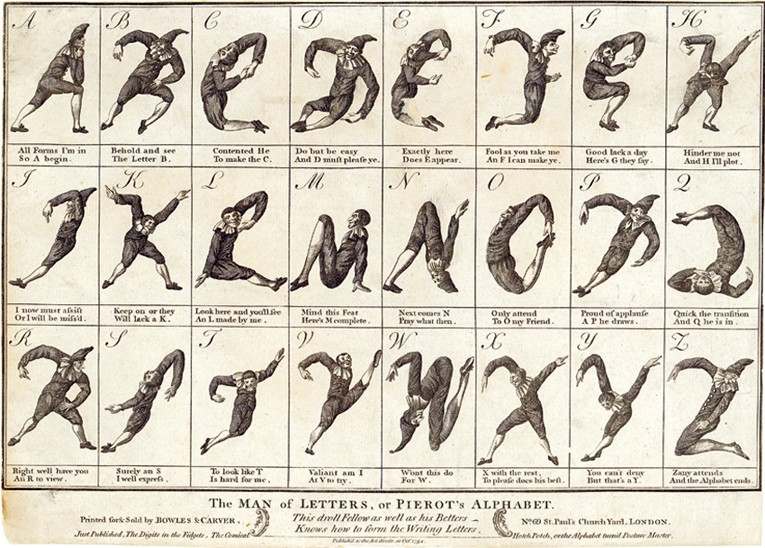 Obviously the matter was of some importance to printers, who needed to know what letters were needed in order to complete printed material accurately – and indeed Bowles had included both ‘missing letters’ in 1775 when he had brought out a catalogue of  print alphabets and numbers, in both Roman and Italic versions. It was advertised as “being with figures, double letters, and the most useful dipthongs in the modern taste; designed chiefly for the use of Painters, Engravers, Carvers, Grave-Stone Cutters, Masons, Plumbers, and other Artificers, likewise very useful for merchants and tradesmen’s clerks”. (I confess I haven’t seen the original catalogue – but I gather it is held by the Bodleian Library). It took another couple of decades before  the 25th and 26th letters were definitively added to alphabet: by the time Webster’s Dictionary came out in 1828 the argument was over. ‘J’ and ‘V’ were officially recognized and accepted in their own right.