I confess that I had never heard of a card game called Pope Joan until I came across a picture of a papier mache bowl (offered for sale at auction by Skinners). They described it as being late 19th Century – I would have guessed somewhat earlier, perhaps Regency.

A quick search on google reveals a couple of similar bowls – this one a tinware glazed bowl made some time between 1750 and 1770 (shown courtesy of the British Museum).

There is also another late Georgian one shown here, courtesy of the Graphic Arts Collection, Princeton University Library. 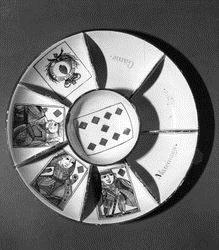 So who, what and why Pope Joan? Apparently stories started circulating in the 1300’s to the effect that around 900 A.D. there had been a female pontiff, who lived her life disguised as a man. 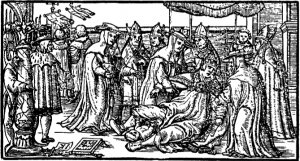 Her cover was blown when she very publicly gave birth to a child while crossing the Via Sacra between the Coliseum and  St Clement’s Church in Rome. Pope John VIII (as she was known) was apparently deposed (or is that de-poped?) and a lovely story suggests that subsequent pontiffs had to undergo a rather intimate examination by a selected Cardinal who would then sing out  “Duos habet et bene pendentes” (“He has two, and they dangle nicely”).

All such scurrilous stories would have been enjoyed  in the Eighteenth Century, a time when anti-Papist feelings ran strong. The name was  given to a card game which became extremely popular in the second half of the century. Played for money it was a game for up to eight players and apart from the staking board shown above, it involved a pack of cards from which the eight of diamonds had been removed. The dealer would start by ‘dressing the board’ – that is to say by placing six counters in the compartment marked ‘Pope’ ( the nine of diamonds), two each in Matrimony and Intrigue, and one each in Ace, King, Queen, Jack and Game.

The cards are dealt with a dummy hand and trumps are selected by turning up the last card dealt. The aim of the game is to win counters by playing cards that correspond to the labeled compartments, and to be the first to run out of cards.

The actual rules are set out more fully here but a summary from that site gives us the following:

The player to the dealers left leads by playing the lowest card he has of any suit he chooses (Ace is low). Whoever holds the next higher card of the same suit plays it next. This continues until no one is able to play and the sequence is stopped. A stop is any King, or any card that no one can follow. Whoever plays a stop card continues the game by playing the lowest card they have of any suit they choose.

Whoever plays the Ace, King, Queen or Jack of trumps, or “Pope”, wins the counters in the appropriate compartment. Anyone playing both Jack and Queen of trumps in succession wins the contents of “Intrigue”.

The first player to play all their cards wins the counters in Game, and also one counter from each player for each card they hold in their hand, except the holder of the unplayed “Pope” card, who is exempted from this payment.

A game consists of several rounds. Unclaimed counters are carried forward to the next deal. It is possible for the “Matrimony” and “Intrigue” compartments to build up large quantities of counters.

The significance of ‘stop cards’ (that is to say the King, or any card which no player can follow e.g. because it is hidden in the dummy hand) is shown by this cartoon by Charles Williams dated  November 1805 (at a time when an invasion by the forces of Napoleon was considered imminent). The lady on the left asks her companion “Whom in your opinion are the happiest couple in England?” and gets the response “The King and Queen Madam, and that’s a stop”

The couple in the middle:  “And do you really think, Major, that Bonaparte means to attempt an Invasion? – pray what is your opinion of him.” To which the answer is given, “A knave Ma’am, and that’s a stop.”

Then on the right a question to the gout-ridden gentleman in his wheel chair: “What unfortunate old lady was that you mentioned just now Mr Spintext?” leading to the response “The Pope, Madam,and I clear the table” 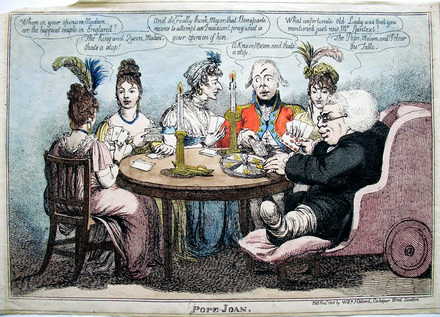 I cannot finish without this lovely cartoon by James Gillray  published in 1796 and entitled “Lady Godina’s rout; – or – Peeping-Tom spying out Pope-Joan” 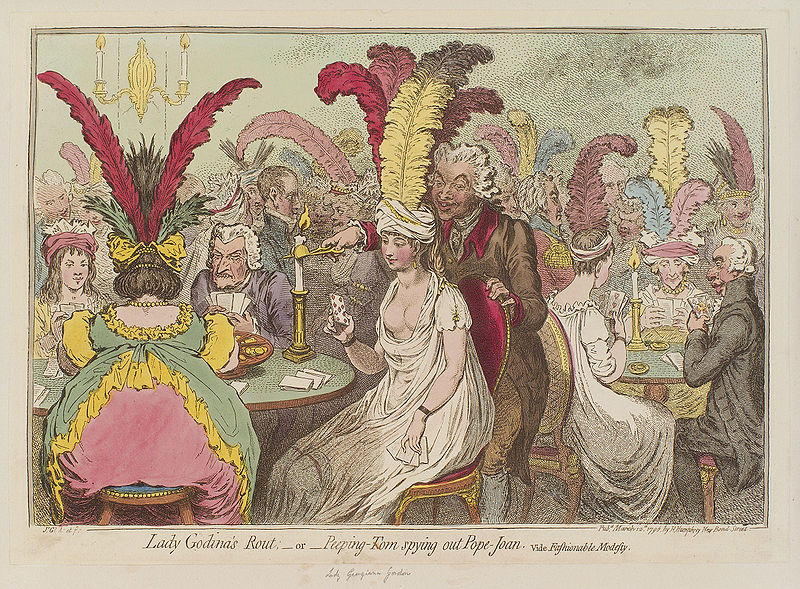 According to the National Portrait Gallery  the caricature refers to Lady Georgiana Gordon (1781–1853), who became Duchess of Bedford in 1803.  The title and the lecherous servant refer to Lady Godiva. Pope-Joan is the card game being played by those assembled; Lady “Godina” is holding the nine of diamonds, which is known as”Pope”. The man sitting on Lady “Godina”‘s right is John Sneyd (1763–1835); the fat woman sitting on her left is Albinia, Countess of Buckinghamshire (died 1816).

7 Responses to “Who or what was Pope Joan?”