Who would be an actor in the Eighteenth Century?

I came across this lovely Rowlandson print upon the fascinating site of the late Graham Saville It is entitled “A theatrical Candidate” and is thought to date from 1797. It shows the theatre manager Sheridan, seated, being addressed by an actor, who appears to be somewhat down on his uppers and is asking for work.

Under the title are the words:

“A candidate for the stage lately applied to the manager of Drury Lane Theatre for an engagement. After he had exhibited specimens of his various talents, the following dialogue took place between the Manager and him: “Sir you stutter” – “So did Mrs. Inchbald” – “You are lame of leg” – “So was Foote” – “you are knock kneed” – “So is Wroughton” – “you have a d—nd ugly face” – “So had Weston” – “You are very short” – “So was Garrick” – “You squint abominably” – “So does Lewis” – “You are a mere monotonous mannerist” – “So is Kemble” – “You are but a miserable copy of Kemble” – “So is Barrymore” -……..- “But you have all these defects combined” – “So much the more singular.” 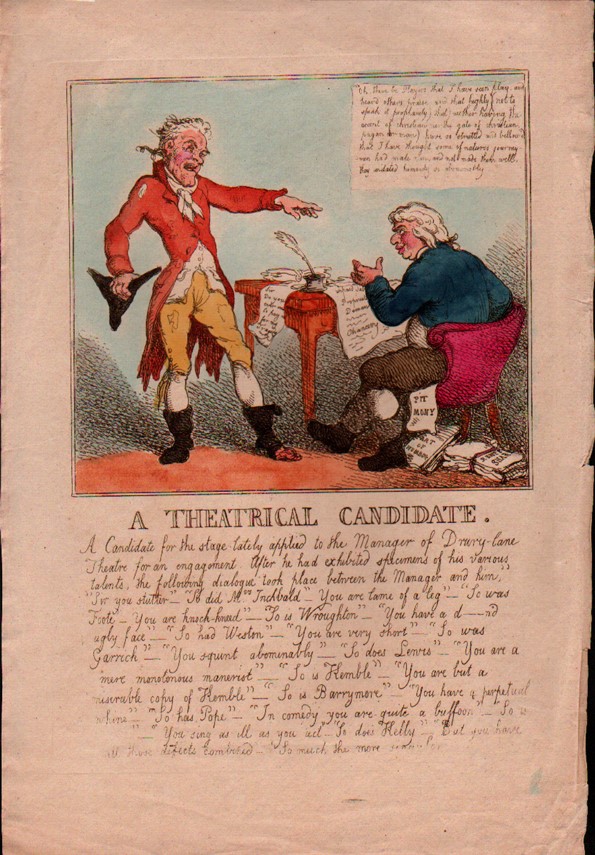 I like it as much as anything else for the description by Sheridan of the short-comings of all the leading actors of the Age. And if you are interested in buying 18th Century prints do have a look at the Graham Saville site – there are some lovely items for sale.

1 thought on “Who would be an actor in the Eighteenth Century?”