Last month I did a trans-Atlantic crossing on the Splendor – see previous blog. This month I did another one, this time using the northern route (New York to Southampton) on board the Queen Mary 2. It was all a bit strange and last-minute-ish because until the day before I flew out to New York I had no inkling that the cruise was taking place. Apparently Cunard had been let down at the last moment when the designated  lecturer went down with Covid. So the call went out: can you drop everything, pack, and catch a flight first thing in the morning?

Oddly, my diary revealed nothing to prevent such craziness so I accepted the challenge, rushed off to get a Lateral Flow Test, caught a plane to JFK airport, and arrived at 13.00 the next day. I then spent the most perplexing hour of my life sitting in a Yellow Taxi, trying to explain to the driver where Brooklyn Harbour was. He hadn’t a clue. To the extent that when his SatNav went blank he screeched to a halt in the middle of a three-lane highway in order to consult his phone, with cars hooting and flashing as they swerved in and out around us. He literally stopped there for half a minute. He then asked ME to look up the address on my phone and he finally moved off, steadfastly sitting in an imaginary lane straddling most of the carriageway. Eventually, I arrived at the ship an hour later, queued to get on board, and left US shores at 17.00 hours after a stay lasting all of four hours. Crazy! 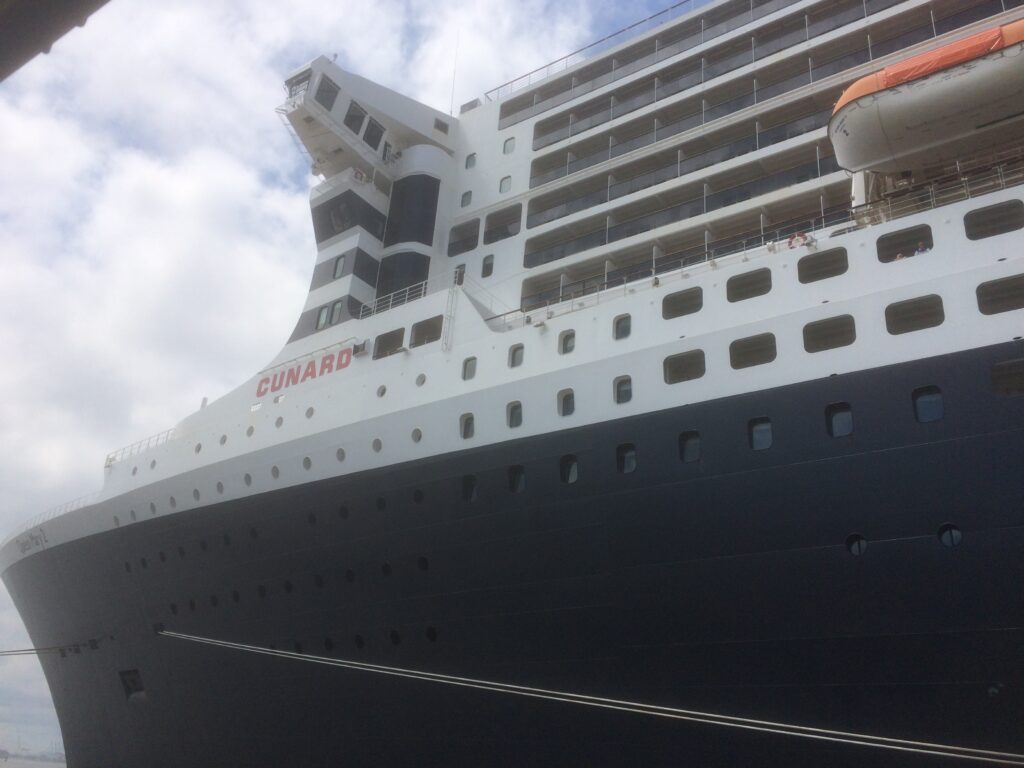 Was it worth it? Well, I had never worked for Cunard before and it was certainly an experience. Especially as we had three days of thick billowing white fog, resulting in the melancholy sound of the fog horn every few minutes throughout the night, three nights in a row. I gather that is fairly normal when going past the Labrador coast! Not good for a man who needs his beauty sleep – especially as My Dear Lady Wife had to stay behind in the UK. By an absurd coincidence she had sent off her passport for renewal just one week earlier – she had used up almost all the pages and  was going to need a new passport at some stage. We had been warned of 16 week delays. As it happened the new one was issued within a fortnight – but not in time for her to accompany me on the cruise. So she missed out on a freebie – something I will doubtless have to pay for shortly! 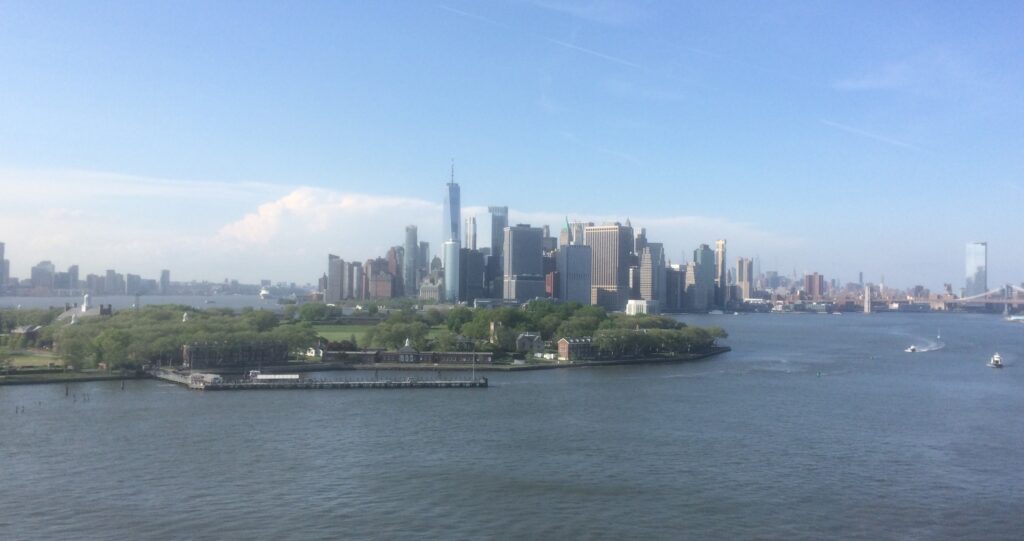 When I accepted the cruise I didn’t know it was themed with the Olivier Awards. It meant that the passenger list included loads of theatre luvvies and if your ‘thing’ is going to dance workshops, singing workshops, and master-classes in make-up, wig making, set design and so on, this was definitely a cruise for you.

The theatres on board were lovely, and the thing which struck me is that normally you know full-well that your audience is coming to listen to you because they have nothing else to do. Not so with Cunard – my talks were packed out with people who were there because this is where they wanted to be, and they were really appreciative. Well, let’s say I am not normally accustomed to getting riotous applause DURING a lecture. It was fun (sort of) being collected as ‘a token celebrity’ to share people’s dinner tables. It was fun meeting people from all walks of life. It was fun going to some of the shows on board, and above all it was fun giving four very different lectures. I started off with the History of Gin and  moved on to Royal Shenanigans. 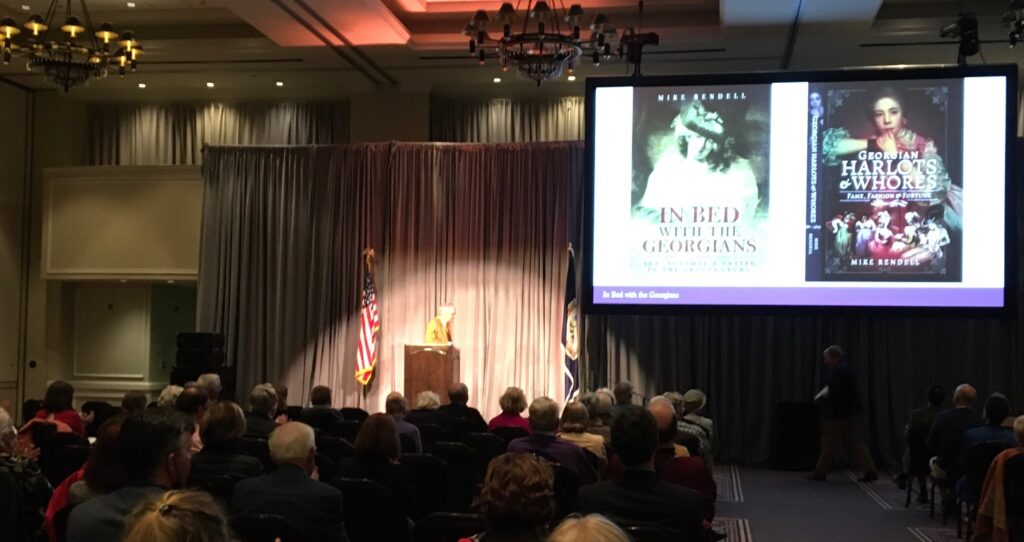 Actually, NOT the theatre on board the QM2 – a different one!

I did Everyday Life in Georgian England and ended up with the story of Philip Astley – Father of the modern Circus (and of modern variety shows). And then it was all over – we reached Southampton after six days. At least it gave me an opportunity to strut my stuff in my new dinner jacket which I had bought especially for my gig on the Splendor – only to discover that there really weren’t any formal nights on Regent Atlantic crossings. Good old Cunard had two, so it was a chance to don my finery. And to learn the one thing about travelling solo which I had never appreciated: you need a partner to help put on cuff links when wearing a dress shirt. I am not saying it was the only thing I missed my wife for – but after wrestling for ten minutes with the wretched links it gave me a deep understanding of  the value of companionship and mutual assistance!

I am not going to make a comparison between the Splendor and the QM2 – they are as different as chalk is to cheese. Both serve as a reminder of how today’s world is so very different to that of my ancestor Richard Hall – it has shrunk to an extraordinary degree. The family diaries show that when Richard’s father was looking for a bride he set out on horseback, visiting all the manor houses within a radius of one day’s travel. So, a radius of twenty to thirty miles. That was his world and he knew that that was here he would find his bride. 300 years later I wasn’t looking for a bride – but I was happy to fly thousands of miles just to catch a ship which in my ancestor’s days might have taken up to six weeks to do the crossing. Travel is something we take for granted – it really is a small world….