There is no delicate way of putting it: my ancestor had problems with wind. He diarised ways of avoiding it (basically by not eating what he called ‘flatulums’ i.e. beans). And he wrote down endless recipes for remedying the problem once started.

One of his favourite cures was given him by his friend Mr Stead. “For Oppression in the Stomach: about five grains of Rhubarb or as much as will lay upon the head of a silver 2d, with an equal quantity of nutmeg, every other night.”

A slightly more complicated cure was offered by Dr Smith to Mr Warne, who passed it on to Richard for ‘a Windy Complaint’

Steep these in one pint Mountain and half a pint Brandy. Shake the bottle once a day at least, let it stand for 5 or 6 days, decant off the Clear and put half the quantity of Wine and Brandy. Let it stand 12 or 14 days and then strain off the whole of the liquor and put it to the other.Take a wine Glass in two Glasses of Water once or twice a day.”

And Jesuits Bark? Well this is the answer from Wikipedia: 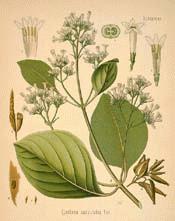 Flower of the Peruvian Bark tree

“Jesuit’s Bark, also called Peruvian Bark, is the historical name of the most celebrated specific remedy for all forms of malaria. It is so named because it was obtained from the bark of several species of the genus Cinchona…. that have been discovered at different times and are indigenous in the Western Andes of South America and were first described and introduced by Jesuit priests who did missionary work in Peru. Other terms referring to this preparation and its source were “Jesuit’s Tree”, “Jesuit’s Powder” and “Pulvis Patrum”.

Richard on the other hand refers to Peruvian bark as being “grown in Quitto and is the size of a Cherry Tree bearing a long reddish flower from whence arises a pod with a kernel like an almond; but the fruit does not seem to have the same virtues as the bark”

What does that all add up to? Quinine. But hey, who cares about a little flatulence if you’ve just knocked back a potent concoction of wine and brandy, stewed over a few herbs for three weeks. If that didn’t cause wind nothing would….

My ancestor Richard Hall was a hypochondriac who ‘enjoyed ill health’. His diaries are full of his ailments and remedies, and many of these are set out in The Journal of a Georgian Gentleman.

Finally, and inevitably, a Gillray cartoon entitled ‘Taking Physick’ showing the unfortunate effects of taking laxatives. The facial grimace says all there is to say about the bitter medicine! Two more bottles remain on the mantle-piece The man hasn’t even bothered to adjust his clothing since his last trip to the chamber pot!! Picture courtesy of the Lancashire Gallery at http://www.lancashiregallery.co.uk 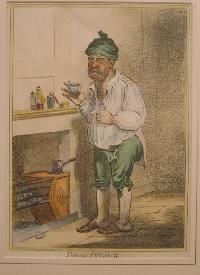 2 Responses to “Wind, or Flatulence, otherwise Oppression of the Stomach.”